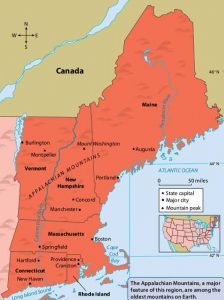 New England is a northeastern region of the United States comprising the states of Connecticut, Maine, Massachusetts, New Hampshire, Rhode Island, and Vermont. 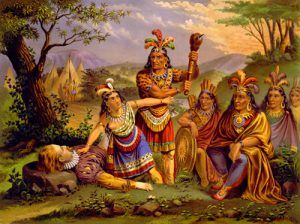 In 1616, English explorer John Smith named the region “New England.” The name was officially sanctioned on November 3, 1620, when the Virginia Company of Plymouth was replaced by a royal charter for the Plymouth Council for New England, a joint-stock company established to colonize and govern the region.

The geography of this region is diverse for such a small area, which includes forested mountains, coastal plains, rolling hills, and the northern end of the Appalachian Mountains. Here, the first Europeans settled in what would become the United States, including the pilgrims at Plymouth Harbor, Massachusetts, who celebrated the nation’s first Thanksgiving in 1620. New England is home to Acadia National Park in Maine and the Cape Cod National Seashore in Massachusetts. Rhode Island is the nation’s smallest state.

Although the smallest region geographically and one not blessed with large expanses of rich farmland or a mild climate, New England played a dominant role in American development. From the 17th century until well into the 19th, New England was the country’s cultural and economic center.

The earliest European settlers of New England were conservative English Protestants, many of whom came in search of religious freedom. They gave the region its distinctive political format—the town meeting (an outgrowth of meetings held by church elders), where citizens gathered to discuss the day’s issues. Even though only men who owned property could vote, town meetings afforded New Englanders an unusually high level of participation in government. Such meetings still function in many New England communities, although they now include women.

New Englanders found it difficult to farm the land in large lots, as was common in the South. By 1750, therefore, many settlers had turned to other pursuits. The mainstays of the region became shipbuilding, fishing, and trade. New Englanders gained a reputation for hard work, shrewdness, thrift, and ingenuity in their business dealings. These traits were helpful as the Industrial Revolution reached America in the first half of the 19th century. In Massachusetts, Connecticut, and Rhode Island, new factories sprang up to manufacture goods such as clothing, rifles, and clocks. Most of the money to run these businesses came from Boston, the nation’s financial heart. 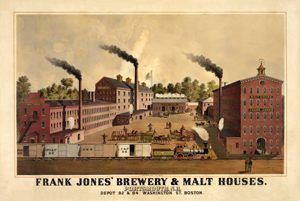 Recently, this populous region has lost many industries to states or foreign countries where goods can be made more cheaply. However, the region’s economy has rebounded with the growth of the microelectronics, computer, and biotech industries. Education, high technology, financial services, tourism, and medicine continue to drive the regional economy.

New England has always supported a vibrant cultural life, with institutions like the Boston Symphony Orchestra and the Museum of Fine Arts. Education is another of the region’s strongest legacies. Its cluster of top-ranking universities and colleges is unequaled by any other region. These top schools include Harvard, Yale, Brown, Dartmouth, Wellesley, Smith, Mt. Holyoke, Williams, Amherst, and Wesleyan, to name but a few.

An important historical, literary work from this region is Thoreau’s Walden, or, Life in the Woods. New England was also home to poets Emily Dickinson and later Robert Frost, as well as to Harriet Beecher Stowe, whose Uncle Tom’s Cabin is credited with giving impetus to the abolitionist movement. 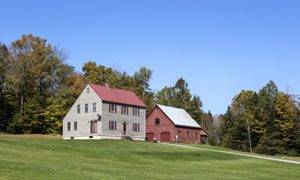 As some of the original New England settlers migrated westward, immigrants from Canada, Ireland, Italy, and Eastern Europe moved into the region. Despite a changing population, much of the original spirit of New England remains. This can be seen in the simple wood-frame houses and white church steeples of many small towns and in the traditional lighthouses that dot the Atlantic coast.

Boston, Massachusetts, the largest metropolitan area in the region, pre-dates the American Revolution, and its Freedom Trail passes sites critical to the nation’s founding. 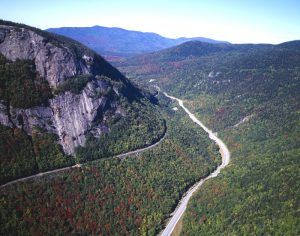