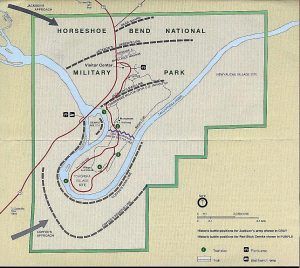 In the Spring of 1814, a deadly and decisive battle would occur on the Tallapoosa River in Alabama, killing more Native Americans in a single battle than any other in the history of America. It would also bring fame to General Andrew Jackson, gain the United States 23 million acres of new territory, and help elect Jackson as the nation’s 7th President in 1828.

The Battle of Horseshoe Bend was the final conflict of the Creek War of 1813 and 1814. Leading up to this time, the Creek Indians, or Muskogee as they are also known, lived in villages along rivers in Georgia and Alabama. Some were friendly to the United States, however, when war erupted between the U.S. and Britain in 1812, a few warriors joined with Shawnee military leader Tecumseh, who had previously encouraged them to drive out Americans from their ancestral lands. Tecumseh was allied with the British in the War of 1812.

The split among the Creek brought about a Creek Civil War, with the faction against the U.S. taking the name of Red Sticks, which scholars believe referred to their red-painted war clubs.

In late July of 1813, Mississippi Territory Militia ambushed a party of Red Sticks returning from Florida with Spanish ammunition and supplies.  In turn, the Red Sticks killed 250 Creek and American settlers at Fort Mims Alabama. This massacre prompted the U.S. to gather forces from Tennessee, Georgia and Mississippi Territory for a three-pronged assault on the Creek Red Sticks.

Andrew Jackson was appointed by the Governor of Tennessee to take its states militia into Creek territory, and in March of 1814 was reinforced with soldiers from the United States Infantry. On March 26, Jackson led 3,300 men and camped just a few miles northwest of Horseshoe Bend.  His men included 500 Cherokee and 100 Creek warriors allied with the U.S.

In the meantime, respected Creek war Chief Menawa waited at the bend with 1,000 Red Stick warriors, and 350 women and children who had gathered there for protection.  At the bend, they had fortified the village of Tohopeka with the hope of keeping attackers at bay or at least allowing time for some of them to escape downriver. 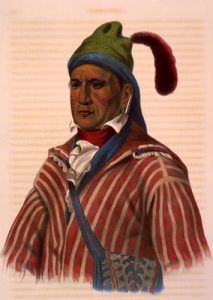 On the morning of March 27, 1814, General Jackson split up his men, ordering General John Coffee to lead a force of 700 mounted riflemen and all 600 allied Native American warriors to cross the Tallapoosa River just downriver from the village and surround it, while the remaining 2000, led by Jackson, made their way directly to the log barricades built by the Creek at the neck of Horseshoe Bend.

Beginning around 10:30 a.m., and lasting for two hours, Jackson bombarded the fortified log wall with cannon fire in order to blow a hole through it for his troops.  During this, Cherokee warriors under General Coffee swam across the river and stole canoe’s, using them to bring an increasing number of warriors across the river to attack the village from the south. At 12:30 that afternoon, after Jackson could see smoke rising from the attacks to the south, he launched his own assault, leading a brutal battle that would last for nearly six hours. The Red Sticks were outnumbered and outgunned, with many of them trying to escape into the river only to be shot by General Coffee’s men.

After the fighting ended, more than 800 Red Stick warriors lie dead.  557 of those were on the battlefield and 300 in the river. The women and children became prisoners of the Cherokee and allied Creek warriors. Only 49 of Jackson’s troops perished. Chief Menawa, who was wounded several times during the battle, lay among the dead until nightfall, then escaped by canoe.

The Battle of Horseshoe Bend ended the Creek Civil War and made Jackson a hero, prompting his promotion to a major general in the U.S. Army, during which time he defeated the British at the Battle of New Orleans in January 1815.  These two victories would help get him elected as President of the United States in 1828. 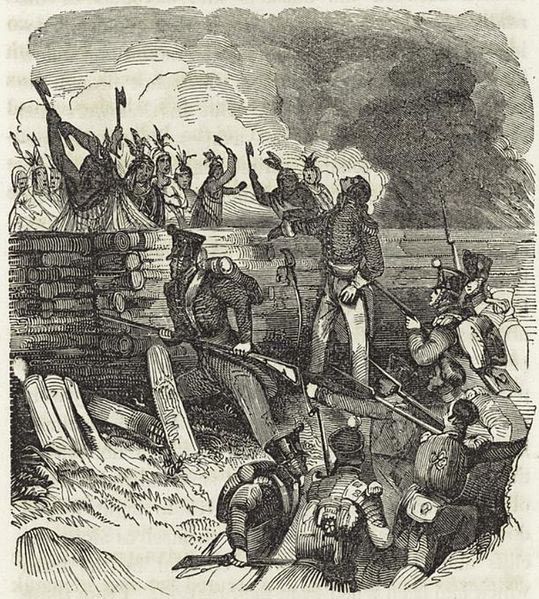 A few months after Horseshoe Bend, Jackson and Creek Chiefs signed the Treaty of Fort Jackson on August 9, 1814, officially ending the Creek War and giving the U.S. almost 23 million acres of Creek land. Much of the land became the state of Alabama in 1819.