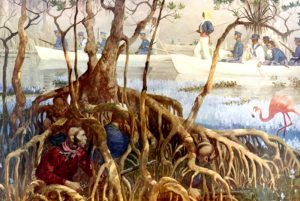 Much of the fighting during the Seminole Wars was fought in the swamps of Florida.

After the American Revolution, Spain regained control of Florida from Britain as part of the Treaty of Paris. When the British evacuated Florida, Spanish colonists and American settlers came into the state in great numbers, many of whom were lured by Spanish land grants. Even the Seminole Indians were encouraged to set up farms because they provided a buffer between Spanish Florida and the United States.

First Seminole War (1816-1819) – This conflict began with the massacre of about 50 Americans near an army post in Georgia. It climaxed in a series of raids against American settlements by the Seminole based in Spanish Florida. Brigadier General Edmund P. Gaines, the Indian commissioner of the area, attempted countermeasures but soon found himself and his force of 600 Regulars confined to Fort Scott, Alabama, by the Seminole. War Department instructions to Gaines had permitted the pursuit of Indians into Florida but had forbidden interference if the Indians took refuge in Spanish posts.

Major General Andrew Jackson, who was ordered to take over the operation, chose to interpret Gaines’ instructions as sanctioning a full-scale invasion of the Spanish colony. He organized a force of about 7,500 volunteers, militia, subsidized Creek Indians, and Regulars and invaded Florida with part of this force in the spring of 1818.

Jackson destroyed Seminole camps and captured Pensacola, the capital of Spanish Florida, and other Spanish strongholds. He also executed two British subjects, Alexander Arbuthnot and Robert Ambrister, who were accused of inciting and arming the Indians. Great Britain and Spain’s governments expressed outrage over the “invasion.” However, Spain could not defend or control the territory, as several local uprisings and rebellions were made clear. It also jeopardized negotiations with Spain pertinent to Florida’s cession to the United States in the Adams-Onis Treaty of 1819. Eventually, the British were mollified, and a compromise agreement was reached with the Spanish under which American forces were withdrawn from Florida without repudiating the politically popular Jackson. The transfer of Florida to the United States took place in 1821.

The Treaty of Moultrie Creek of 1823 required the Seminole to leave northern Florida, and they were confined to a large reservation in the center of the Florida peninsula. The U.S. government enforced the treaty by building a series of forts and trading posts in the territory, mainly along the Gulf and Atlantic coasts. However, the “Seminole problem” was temporarily allayed but by no means solved. 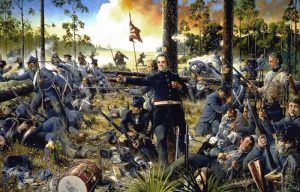 Second Seminole War (1835–1842) – More treaties were made with the Seminole when the United States government wanted the tribe to leave Florida and move to Indian Territory (Oklahoma) per the Indian Removal Act of 1830. In the Treaties of Payne’s Landing in 1832 and Fort Gibson in 1833, the Seminole had agreed to give up their lands but refused to move out. As the government attempted to force the Seminoles to leave, fighting began with the Dade Massacre in December 1835; raids, skirmishes, and a handful of larger battles were fought throughout the Florida peninsula few years.

Following the arrest and release of Seminole Chief Osceola in 1835, Seminole depredations rapidly increased. These culminated on December 28 in the massacre of Captain Francis L. Dade’s detachment of 330 Regulars en route from Fort Brooke in Tampa to Fort King in Ocala – a disastrous loss for the small, regular force of 600 men in Florida. Brigadier General Duncan L. Clinch, commanding Fort King, took the offensive immediately with 200 men and, on December 31, 1835, defeated the Indians on the Withlacoochee River.

Meanwhile, the War Department had ordered Brigadier General Winfield Scott, commander of the Eastern Department, to Florida to direct operations against the Seminole. Most of the hostilities had occurred in General Gaines’ Western Department, but the War Department expected impending troubles in Texas to keep Gaines occupied. Nevertheless, Gaines had quickly raised about 1,000 men in New Orleans, Louisiana, and, acting on his own authority, embarked for Florida in February 1836. Even after learning of Scott’s appointment, Gaines seized supplies collected by Scott at Fort Drane and pressed forward until heavily attacked by Seminole. He succeeded in extricating his force only with help from Scott’s troops. Shortly after that, Gaines returned to New Orleans.

Completing preparations for Scott’s proposed three-pronged offensive converging on the Withlacoochee River was delayed by Gaines’ use of Scott’s supplies, expiration of volunteer enlistments, and temporary diversion of troops to deal with the Creeks, who were then on the warpath in Georgia and Alabama. Before the campaign could get underway, Scott was recalled to Washington to face charges of dilatoriness and casting slurs on volunteers’ fighting qualities. In December 1836, Major General Thomas S. Jesup took increasingly desperate measures to win the war. 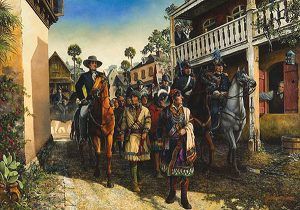 On October 21, 1837, Osceola and 81 of his followers were captured by General Joseph Hernández on General Thomas Jesup’s orders, under a white flag of truce, when they went for peace talks to Fort Peyton near St. Augustine. Osceola was initially imprisoned at Fort Marion in St. Augustine before being transferred to Fort Moultrie in Charleston, South Carolina. Osceola’s capture by deceit caused a national uproar. General Jesup’s treacherous act and the administration were condemned by many congressional leaders and vilified by the international press. Jesup suffered a loss of reputation that lasted for the rest of his life; his betrayal of the truce flag has been described as “one of the most disgraceful acts in American military history.”

Colonel Zachary Taylor decisively defeated a sizeable Indian force near Lake Okeechobee in December 1837, and afterward, no more large forces were assembled on either side. With Osceola in prison, the United States was confident the war would end soon. But it did not. Although Osceola died in prison in 1838, other Seminole leaders kept the battle going for a few more years.

By the early 1840s, most of the Seminole population in Florida had been killed in battle, ravaged by starvation and disease, or relocated to Indian Territory.

Colonel William J. Worth finally conceived a plan to campaign during the enervating summer seasons to destroy the Indian’s crops. This plan successfully drove a sufficient number of Seminole from their swampy retreats to permit the official termination of the war on May 10, 1842. However, no peace treaty was ever signed.

During the long and difficult campaign, some 5,000 Regulars were employed, with a loss of nearly 1,500 killed. Nearly 20,000 volunteers also participated in the war, costing some 20 million dollars and removing some 3,500 Seminole to the Indian Territory. However, several hundred Seminoles were allowed to remain in an unofficial reservation in southwest Florida. 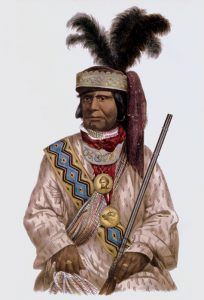 Third Seminole War (1855–1858) -This war resulted from Seminole responding to settlers and U.S. Army scouting parties encroaching on their lands, perhaps deliberately to provoke a violent response that would result in the removal of the last of the Seminole from Florida. After an army surveying crew found and destroyed a Seminole plantation west of the Everglades in December 1855, Chief Billy Bowlegs led a raid near Fort Myers, setting off a conflict that consisted mainly of raids and reprisals, with no significant battles fought. American forces tried to destroy the Seminole food supply. In 1858, most of the remaining Seminoles, weary of war and facing starvation, agreed to be shipped to Oklahoma in exchange for promises of safe passage and cash payments to their chiefs.

An estimated 200 Seminole still refused to leave and retreated deep into the Everglades and the Big Cypress Swamp to live on land that was unwanted by white settlers. Since the war was officially over and the remaining Seminole carefully avoided contact with settlers, the government sent the militia home. It reassigned most of the regular Army troops, leaving only small contingents in larger coastal forts such as Fort Brooke. Most smaller forts scattered across the Florida wilderness were decommissioned and soon stripped by settlers of any usable material.

In the 1940s, the Seminole who remained in Florida began to move to reservations and establish official tribal governments. There are several official Seminole Tribes in Florida today.