The Old West, often referred to as the Wild West, encompasses the period after the Civil War, the rest of the 1800s, and the early part of the 20th century up to 1912, when the last mainland states entered the Union. During this time, thousands of pioneers pushed their way westward in search of land, better lives, gold and silver, and sometimes, to escape the law. Geographically, the “Old West” generally applies to those states west of the Mississippi River.

From outlaws, to gunfighters, to the American cowboy, and buried treasures on the frontier, Old West Legends provides tales, biographies, and in-depth history into the lives and times in the American West.

Belly up to the bar and have a drink in the saloon, meet Billy The Kid, Jesse James and littler known outlaws like Hoodoo Brown; learn about the frontier skirmishes between the pioneers and the Indians, and visit the ghost towns, mining camps, and cowtowns on the prairie. More than just a glimpse of the past, Old West Legends will transport you into the adventurous times of the Wild Wild West. 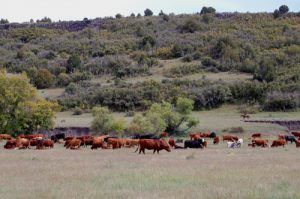 Cowboys from the Raton, New Mexico area drive 500 head of cattle along the Dry Cimarron to Des Moines, New Mexico by Kathy Weiser-Alexander.

“Well, if there ain’t going to be any rules, let’s get the fight started.”

Ghost Stories From the Past

An Era Ends As the Telegraph Passes Into History

The Most Prolific Gunslingers of the Wild West

Outhouse Madness – Relics of Another Time