The term Paiute involved a great deal of confusion in the 1800s. In common usage, it was applied at one time or another to most of the Shoshonean tribes of west Utah, northern Arizona, southern Idaho, eastern Oregon, Nevada, and eastern and southern California. The generally accepted idea is that the Paiute means either “water Ute” or “true Ute.”

John Wesley Powell stated that the name properly belonged exclusively to the Corn Creek tribe of southwest Utah, but was extended to include many other tribes and employed as a convenient divisional name for the tribes occupying southwest Utah, the southwest part of Nevada, and the northwest part of Arizona.

With regard to the Indians of Walker River and Pyramid Lake reservations, who constitute the main body of those commonly known as Paiute, Powell claimed that they were not Paiute at all, but another tribe which he called Paviotso. He stated:

The Indians of Walker River and Pyramid lake claimed the Bannock as their cousins and said that they spoke the same language. The different small bands had little political coherence, and there was no recognized head-chief. The most influential chiefs among them were Winnemucca and Natchez. As a rule, they were peaceable and friendly toward the whites, although in the early 1860’s they several times came into collision with miners and emigrants, hostility being frequently provoked by the whites themselves. 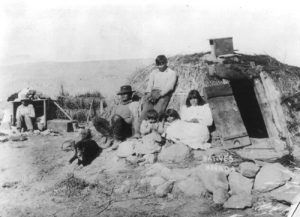 The Northern Paiute were more warlike than those of the south, and a considerable number of them took part in the Bannock War of 1878. Owing to the fact that the great majority of the Paiute (including the Paviotso) were not on reservations, many of them being attached to the ranches of white men, it was impossible to determine their population but were estimated at from 6,500 to 7,000.

As a people, the Paiute were peaceable, moral, and industrious, and were highly commended for their good qualities. By their willingness and efficiency as workers they made themselves necessary to the white farmers, which enabled to supply themselves with good clothing and many of the comforts of life, while on the other hand they steadily resisted the vices of civilization, so that they were spoken of by one agent as presenting the “singular anomaly” of improvement by contact with the whites. Another authority said:

“To these habits and excellence of character may be attributed the fact that they are annually increasing in numbers, and that they are strong, healthy, active people. Many of them were  employed as laborers on the farms of white men in all seasons, but they were especially serviceable during the time of harvesting and haymaking.”

Aside from their earnings among the whites, they derived subsistence from the fish of the lakes, jackrabbits and small game of the sage plains and mountains, and from piñon nuts and other seeds, which they ground into flour for bread. Their ordinary dwelling was the wikiup, or small rounded hut, of tule rushes over a framework of poles, with the ground for a floor and the fire in the center, and almost entirely open at the top. Strangely enough, although appreciating the advantages of civilization so far as relates to good clothing and to such food as they can buy at the stores, they manifested no desire to live in permanent houses or to procure the furniture of civilization, and their wiki-ups were almost bare of everything excepting a few wicker or grass baskets of their own weaving.

Two more famous chiefs of the Paiute were Big Bill, who aided Mormon John D. Lee in the  Mountain Meadows Massacre in southern Utah in 1857 and Wovoka, a medicine man who originated the  Ghost Dance. 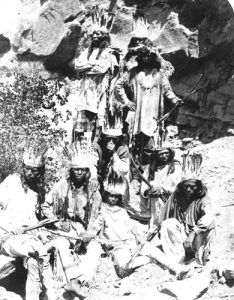 About the Author: Adapted from the Handbook of American Indians, by Frederick Webb Hodge written in 1906. Though the context remains generally the same, some words, phrases, and the order of the material have been changed to correct grammar and spelling and to make this old document more easily read by the modern reader.