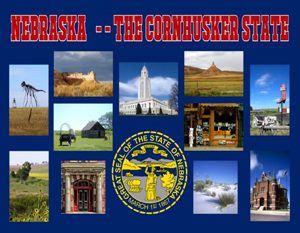 Whatever your interests and wherever your travels may take you in Nebraska, you’ll discover that the possibilities are endless.

Enjoy Nebraska’s diverse beauty as you see towering land formations, rugged buttes, and yawning prairies. Enjoy an infinite list of outdoor activities as you hike and bike the trails of its many state parks, fish the White River or climb its many cliff formations.

From small-town ethnic festivals to uptown art shows, you are sure to enjoy Nebraska.

Enjoy your travels in Nebraska and welcome to the Cornhusker State.

The state flag of Nebraska consists of the state seal on a field of national blue.  The official state seal was created in 1866.  The seal displays a steamboat ascending the Missouri River, the mechanic arts are represented by a smith with a hammer and anvil,  agriculture is represented by a settlers cabin, sheaves of wheat, and stalks of growing corn.  In the background is a train of cars heading towards the Rocky Mountains.  Around the top of the circle is the state: “Equality Before the Law.” 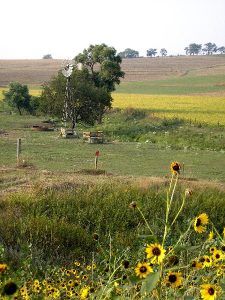 Heroines of the Plains

The Legend of Blackbird Hill

Nebraska Forts of the Old West

The Pawnee Indians – Farmers on the Plains

Hiram Scott and the Tragedy of Scotts Bluff 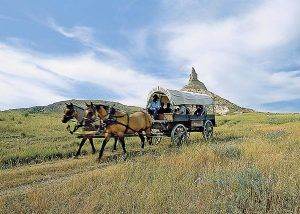