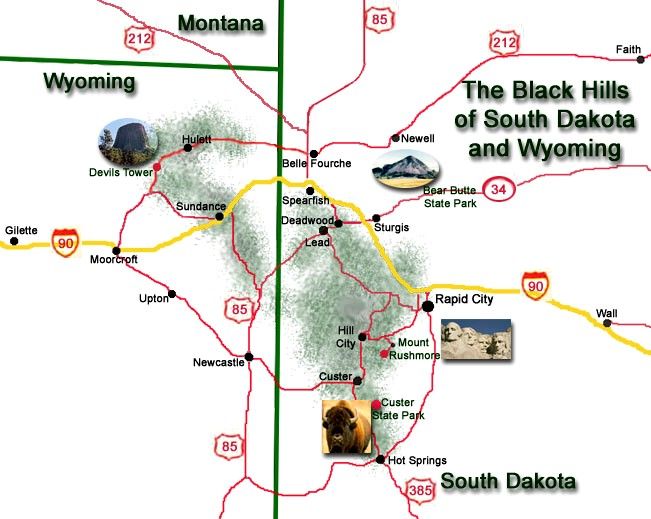 The fabled Black Hills of South Dakota are an uplifted island of pine-clad mountains rising from the Great Plains. With their impressive pinnacles, mysterious geologic formations, and dense forests, the area provides a number of picturesque views, hiking opportunities, ghost towns, National Parks and state parks, and a wealth of history in this region of stark contrasts.

This small isolated mountain range, formed in the time between the dinosaurs’ extinction and the beginning of the most recent ice age, is marked by Mother Nature’s restless winds, erosion, and volcanic activity. It is the oldest set of Mountains in what is now the United States.

The region has been inhabited by Native Americans for almost 10,000 years. The Arikara arrived in the Black Hills by about 1500 A.D., followed by the Cheyenne, Crow, Kiowa, and Pawnee.

However, when the Lakota arrived in the 18th century, they drove out the other tribes and claimed the land for themselves. The lands soon became sacred to the Lakota Sioux, who called them Paha Sapa, which means “hills that are black.”

At about the same time as the Lakota migration to the region, French Canadian explorers began mapping the Missouri River and trading with the Indians for pelts and hides to be shipped back East. Adventurers Francois and Joseph La Verendrye claimed the region for King Louis XV in 1743 by placing an engraved lead plate on the bank of the Missouri River near present-day Pierre.

When President Thomas Jefferson made the Louisiana Purchase with Napoleon of France, the 828,000 square-mile purchase included all of what would later become South Dakota. In 1803, Jefferson sent his personal secretary Meriwether Lewis and his friend William Clark to explore the new territory. The 31-member party met little resistance from the Indians as they passed through South Dakota. Along the Missouri River, the expedition was joined by French trader Toussaint Charbonneau and his 15-year-old wife Sacagawea, whom the Frenchman had won in a gambling match. The young Shoshone woman helped to guide Lewis and Clark all the way to the Pacific Ocean.

When the expedition returned east in 1806, their writings were widely read by would-be settlers headed for the upper Missouri Valley. As European immigrants flooded the eastern United States, white settlers gradually moved westward seeking fertile land and suitable town sites. Lewis and Clark heard tales about the Black Hills from other traders and trappers, but it wasn’t until 1823 that Jedediah Smith and a group of about 15 traders actually traveled through them.  While other adventuresome trappers also explored the hills, most avoided the area because it was considered sacred by the Lakota.

The Lakota never welcomed the white man to their hunting grounds and as immigration increased there was a marked decline in American Indian-white relations. The Army established outposts nearby, but they seldom entered the Black Hills. Trouble escalated when bands of Lakota began to raid nearby settlements, then retreating to the Hills.

Because of this, Lieutenant G.K. Warren was assigned the task of making a thorough reconnaissance of the plains of South Dakota, including the area known as the Black Hills. Another expedition was sent in 1859-60 led by Captain W.F. Reynolds and Dr. F.V. Hayden. 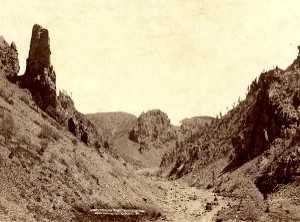 In 1861, residents of what is now Eastern South Dakota began organizing groups of miners and explorers to investigate the Black Hills and reports of gold. In 1862, the U.S. Congress passed the Homestead Act, which offered American citizens the opportunity to purchase 160 acres of unsettled land for about $18 an acre in parts of Dakota Territory. The settlers who made an application for a homestead were expected to construct a home and plant crops upon the property. Because few trees grew on the prairies, the pioneers most often built their homes from sod strips stacked like bricks which earned them the name “sodbusters.”

In 1865, the pioneers pushed Congress for yet another military reconnaissance of the Black Hills. However, the military recognized the importance the Lakota Nations attached to the area and in 1867 General William T. Sherman stated that the Army was not in a position to investigate the Black Hills and would not protect any civilians who did so. 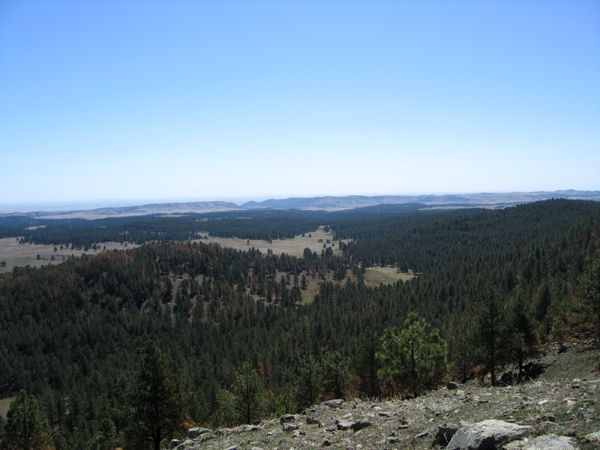 The Black Hills of South Dakota by Kathy Weiser-Alexander.

In 1868 the federal government entered into a series of treaties with the Lakota resulting in the Fort Laramie Treaty which established the Great Sioux Reservation including all lands from the Missouri River west to the Bighorn Mountains of western Wyoming. The treaty forever ceded the Black Hills to the Lakota Sioux in an effort to bring about a lasting peace with the tribes of the plains and established agencies that would distribute food, clothes, and money to the Native Americans. The treaty prohibited settlers or miners from entering the Hills without authorization. In return, the Lakota agreed to cease hostilities against pioneers and people building the railroads.  However, settlers continued to enter the Lakota reservation and renewed Indian raids on nearby settlements caused General Philip Sheridan to propose an expedition to investigate the possibility of establishing a fort in the Black Hills in 1874.

When George Armstrong Custer led an expedition into the Black Hills, gold was “officially” discovered on June 30, 1874, which soon led to thousands of miners encroaching upon the Sioux lands in violation of the treaty and Federal law. Control over the land sparked the last major Indian War on the Great Plains – the Black Hills War (1876-1877), which included several famous battles including the Battle of Rosebud, Battle of the Little Bighorn, the Dull Knife Fight, and the Battle of Slim Buttes.

In the fall of 1876, the U.S. Army defeated the Lakota, forced them onto reservations and formed yet another treaty in 1877, which gave the U.S. title to the Black Hills and legalized gold mining in the territory. Over a century later this Act would be determined illegal by the Supreme Court.

Before long, several boomtowns were established including Custer City, Deadwood, and Lead.

Numerous trails abound throughout the parks for hiking, biking, and cross-country skiing, through forests and grasslands where the nature lover will find an abundance of wildlife including buffalo, deer, antelope, big-horn sheep, prairie dogs, and more. 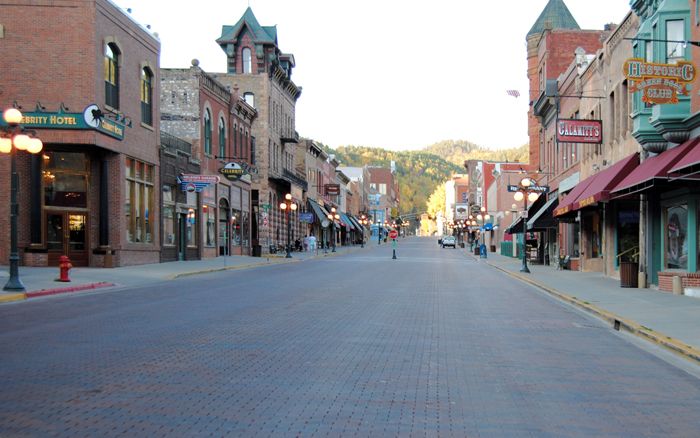 Though most of the mining has been replaced by ranching, signs of the past can still be seen in a number of ghost towns including Central City, Addie Camp, Addie Creek, and more. The one-time gold camp of Deadwood is now a well-preserved gambling mecca and its twin city of Lead features tours of the now-closed Homestake Mine.

In Sturgis, the annual motorcycle rally draws more than half a million visitors to the Black Hills each August.

All in all, the Black Hills offers something for everyone, from the historian to the naturalist, as it combines a flavor of the Old West with quaint attractions, rodeos, and outdoor recreation.

The February Act of 1877 which stripped the Sioux of the Black Hills and permanently established Indian Reservations is still in dispute to this day. Controversy results from the fact that the Federal Government purchased the land from the Sioux, but there is no valid record of the transaction. The legal battle began in the 1920s, but the initial case wasn’t decided by the Supreme Court until 1980 when the court ruled to support an earlier lower court ruling awarding the Sioux nation $106 million.  Further complications arose however as the Sioux Tribe argued that same year that they never signed a contract with Arthur Lazarus, who argued the case and had been involved with it since the mid-1950s.  The Tribe refused to accept the award from the Supreme Court, saying the court’s decision should be vacated on the grounds the tribe was not represented.

Legal battles continue with the Tribe wanting the Federal lands of the Black Hills, and money. Despite the fact that the award given to them in 1980 still sits in a trust gaining interest, they refuse to accept the outcome of the Supreme Court decision saying it would remove any legal standing they have to the Black Hills.

The issue was revived in 2009 when President Barack Obama stated his support for the tribe’s decision not to take the settlement money for the Black Hills. In September of 2012, the United Nations, after meeting with several tribes in the U.S., recommended that the United States return lands to some Native Americans, including the Black Hills to the Sioux.  The dispute is still unresolved.

Banshee Of The Bad Lands