Aondironon – A branch of the Neutral tribe whose territory bordered on that of the Huron in western Ontario, Canada. In 1648, owing to an alleged breach of neutrality, the chief town of this tribe was sacked by 300 Iroquois, mainly Seneca, who killed a large number of its inhabitants and carried away many others in captivity 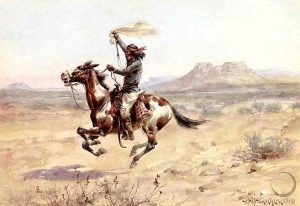 Apache – Primarily located in the southwest, “Apache” is most likely derived from ápachu, a Zuni name for “enemy.” The Apache were not so numerous in the 17th century, but they were a hostile tribe and increased their numbers by taking captives from other tribes, particularly the Pueblo, Pima, Papago, and other peaceful Indians, as well as from the settlements of northern Mexico. Made up of several tribal groups, including the Mescalero, Jicarilla, Faraone, Llanero, Chiricahua, and more, they were collectively known as Apache.

Apalachee – Considered by Spanish explorers to have been the most advanced indigenous nation in Florida, they inhabited the area in northwestern Florida between the Aucilla and Apalachicola rivers above Apalachee Bay. Today, most of the Apalachee live in Louisiana. Its tribal office, located in Libuse, Louisiana, serves approximately 300 members.

Apalachicola – Also called Pallachacola, this tribe, who were related to the Creek Indians spoke a Muskogean language related to Hitchiti. They lived along the Apalachicola River in present-day Florida. Around 1706 some of the Apalachicola moved from the Apalachicola River area to the Savannah River, close to the colony of South Carolina, where they were called the Naleathuckles. In the Yamasee War of 1715, they joined in the Native American attacks on South Carolina. Afterward, the survivors returned to the Apalachicola River, near the juncture of the Chattahoochee River and Flint River. Some later moved north to live along the Chattahoochee River in Alabama. After two Indian Removal Act treaties made in 1833 and 1834, the tribe was moved in 1836-1840 to present-day Oklahoma, where they merged with other Creek peoples.

Appomattoc – A tribe of the Powhatan Confederacy who spoke the Algonquian language, they formerly lived on the lower Appomattox River in Virginia. They were first encountered English explorers in 1607 and the following year were described as having 60 warriors. Their principal village, which bore the same name, was burned by the English in 1611. As the Appomattoc population dwindled, they were vulnerable to attack from traditional western enemy tribes. In 1691, they petitioned to live among the English for protection. By 1705, they were described as having only about seven families and by 1722 they were extinct, having merged with other tribes.

Aquackanonk – A band of the Lenape Indians, they lived on the Passaic River in northern New Jersey when first encountered. Their lands were acquired by Jacques Cortelyou, in 1676 who established a settlement of Dutch traders two years later. A township later took the name, but, by then the Indians were gone.

Aranama – A small agricultural tribe who formerly lived on and near the south coast of Texas. In 1822, however, they were living on the San Antonio River and were estimated to have numbered about 125 people. As a tribe, the Aranama were extinct by 1843.

Arapaho – The Arapaho were originally farming people, but once horses were introduced to the Americas, they began to follow the buffalo herds like the Cheyenne and Sioux. The Arapaho were probably original residents of Minnesota and North Dakota, but as expansion pushed the tribes westward, population pressures forced the Arapaho to resettle in what is now Colorado, Wyoming, and Kansas. Later, the Americans deported one group of Arapaho to Oklahoma, where they share a reservation with the Cheyenne people there; another group of Arapaho remain in Wyoming today, sharing a reservation with the Shoshone people.

Arendahronon – One of the four chief tribes of the Huron Indians, their names means “rock people.” Being located more to the east than the other Huron people, they claimed to be the first allies of the French, who founded among them the missions of St Jean Baptiste, St Joachim, and Ste Elisabeth. In 1649, on the political destruction and expulsion of the Huron tribes by the Iroquois, the inhabitants of St Jean Baptiste submitted in a body to the Seneca, who adopted them. 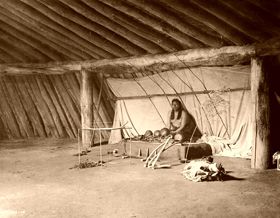 Arikara Indian at the altar, by Edward Curtis, 1908.

Arikara (also Arikaree, Ree) – This semi-nomadic group lived in tipis on the plains of South Dakota for several hundred years. In 1823, the Arikara, frustrated with traders encroaching upon their lands, attacked a group of white travelers, resulting in the short-lived Arikara War. Today, they are associated with the Hidatsa and Mandan, known collectively as the Three Affiliated Tribes. The Arikara live primarily on the Fort Berthold reservation in North Dakota.

Arivaipa – An Apache band whose home was in the canyon of Aravaipa Creek, a tributary of the San Pedro River in southern Arizona. Like the Chiricahua and other Apache of Arizona, they raided far southward and were reputed to have laid waste every town in northern Mexico as far as the Gila, prior to the Gadsden purchase in 1853. They also exterminated the Sobaipuri, a Piman tribe, in the latter part of the 18th century. About 1872 they were removed to San Carlos Agency. The remnant of this tribe is now under the San Carlos and Fort Apache agencies on the White Mountain Reservation in Arizona.