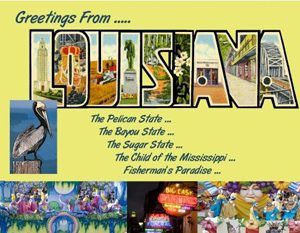 Situated in the Deep South, Louisiana, the “Pelican State” has a colorful history and was named in honor of King Louis XIV.

A state with a varied and colorful past, Louisiana has been governed under ten different flags beginning in 1541 with Hernando de Soto’s claim of the region for Spain.

The original French colonists were soon joined by the Spanish and Acadians and later by French aristocrats fleeing slave revolts in the West Indies or the horrors of the French Revolution. As part of Louisiana’s French legacy counties are called “parishes.” A strong French influence is still evident throughout the state.

With the Louisiana Purchase in 1803, Louisiana became a part of the United States as a territory. It became the eighteenth U.S. state on April 30, 1812.

Its capital is Baton Rouge, and its largest city is New Orleans, known for its Mardi Gras and jazz festivals.

Early History of the Pelican State

Myrtles Plantation – A Most Haunted Place

The Axeman of New Orleans

Port Hudson and a 48-Day Siege

Settlement of the Cane River Area

The Louisiana flag contains a crest centered on a blue field. The crest consists of a nest bearing three chicks, a mother pelican vulning herself with her head turned to the viewer’s right, and displaying three drops of blood on her breast. Beneath the nest, a white banner bears the state motto, “Union Justice Confidence.” 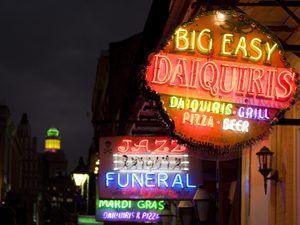 Nightime in the French Quarter of New Orleans. Photo by Carol Highsmith.