Puebloans by the Works Progress Administration, 1940. 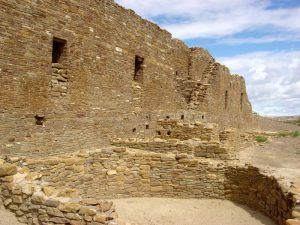 The Ancient Puebloans (Anasazi) were a prehistoric Native American civilization centered around the present-day Four Corners area of the Southwest United States. The ancestors of the modern Pueblo peoples, including the Hopi, Zuni, and the Puebloans, do not prefer the term “Anasazi.” Often referred to as the Ancient Pueblo People or Ancestral Puebloans, the modern Hopi call them “Hisatsinom” (People of Long Ago). The word “Anasazi” is Navajo for “Ancient Ones” or “Ancient Enemy.”

Archaeologists still debate when a distinct Anasazi culture emerged, but the current consensus suggests they first appeared around 1200 B.C. The Ancient Puebloans first settled in the plateau area where water was plentiful, with their initial locations at Chaco Canyon, Mesa Verde, and Kayenta. Later they spanned across the entire Colorado plateau, including northeastern Arizona, northwestern New Mexico, southeastern Utah, and southwestern Colorado.

The earliest Ancient Puebloans were nomadic hunters and gatherers, but later they began cultivating crops and building permanent dwellings. Archeologists have split these different eras into two groups called the Basket Makers and the Puebloans.

The Basket Makers were the first to appear in the southwest, making numerous woven baskets covered with mud and baked to make waterproof containers. They camped in the open or lived in caves as they wandered the plains, hunting with wood clubs, hunting sticks, and spears.

From 1200 B.C. through the beginning of the new millennium, they increasingly began to rely on cultivated gardens of corn and squash. From about 50 A.D. to 500 A.D., this cultural group constructed shallow pit houses mostly built underground, lined with rocks and roofs held up by vertical timbers thatched with mud and branches. They also began to construct storage bins lined with stones to protect their surplus food items.

Around 500 A.D., the first permanent villages were established with deeper pit houses and above-ground rooms. The bow and arrow soon replaced the spear, and the Basketmakers began to make pottery and add beans to their cultivated crops. Turning increasingly to agriculture, growing crops assumed a significant role in their economy, making villages even more permanent.

The many settlements of this time were scattered widely across the canyons and mesas of Utah, Arizona, Colorado, and New Mexico, generally consisting of a dozen or more structures.

Between 750 and 900 A.D., the Ancient Puebloans began a period of transition and advancement that changed them from the Basket Makers to the Ancient Puebloans. Large masonry villages and kivas began to appear and sophisticated pottery designs. Though the deep pit houses continued to be used to a lesser extent, new structures were built of jacal, a Spanish term, which refers to construction using walls of close-set wooden stakes plastered with mud and roofed with straw, rushes, or other materials. In this period, populations began to be concentrated in certain areas, and smaller villages were abandoned.

By the year 900, the area of Chaco Canyon in the northwest corner of New Mexico had become the largest village of the Puebloans. A symmetrical village of above-ground structures followed the same architectural style, with roads leading from place to place. By the year 1050, the communities of Chaco Canyon were at the peak of their activity.

From 1160 to 1340, large pueblos, cliff dwellings, and towers began to appear. During this time, the cliff villages were built in Mesa Verde National Park in Colorado and Navajo National Monument in Arizona. Here the dwellings consisted of large communal habitations built on the ledges of the canyon walls and the flat tops of mesas. Highly defensible against nomadic predatory tribes, such as the Navajo, the Ancient Puebloans withdrew to their high perches in times of attack. Otherwise, the cliff dwellers planted crops in the river valleys below, where they became experts at irrigating the fields.

However, by 1300, the Four Corners Area had been abandoned, though other pueblos further south continued to be occupied. Many of these abandoned settlements were left as if the people planned to return, leaving behind beautiful cooking pots and baskets.

Where did these ancient people go, and why did they leave?

At the turn of the last century, anthropologists proved what the local Indians had known all along — that those who had built the ancient ruins of the Four Corners were the ancestors of the modern Pueblo peoples who live today at Hopi, Zuni, Acoma, and many other Rio Grande Pueblo towns of New Mexico. As to why they left, there are several theories. A known drought occurred from about 1275 A.D. to about 1300 A.D. Other causes may have been a “nuclear winter” caused by a volcanic eruption, climatic fluctuations, and it is known that the area was subject to increased violence and warfare by the newly-arrived Apache and Navajo. In about 1325, the Kachina Phenomenon appeared. This was a religion that some believe integrated the Puebloan society into the Hopi and Zuni tribes.

When these conditions changed, scores of families, probably entire clans, moved and resettled as organized towns. The Four Corners region was rapidly abandoned, with thousands of people leaving in only a few decades. By the year 1400, almost all the Ancient Puebloans throughout the Southwest had aggregated into large pueblos scattered through the drainages of the Little Colorado River and the Rio Grande in Arizona and New Mexico.

By 1600, the Spanish had virtually driven the Pueblo religion underground, and the number of Pueblos shrank from more than 100 observed in 1539 to just 20. Today, a few descendants of the Ancient Puebloans continue to live in a few of the surviving pueblos. 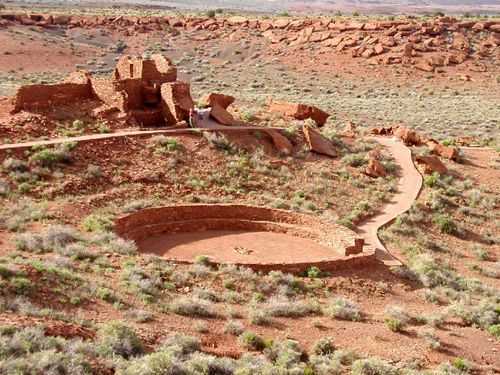 The Ancient Puebloans also created many petroglyphs and pictographs and are known for their unique style of pottery.