Seechelt – A Salish tribe who lived on the Jervis and Seechelt inlets of Nelson Island, and the south part of Texada Island, British Columbia, Canada. They spoke a distinct dialect that historians believed made them related to the Lillooet. By the early 1900s, they all lived in one town called Chatelech, around the mission founded by Bishop Dnrieu, who converted them to Roman Catholicism. Their population in 1902 was said to have been around 300.

Sekani –  A group of Athapascan tribes who lived in the valleys of the upper Peace River and its tributaries and on the west slope of the Rocky Mountains, in British Columbia, Canada. Their name means “dwellers on the rocks.”  At one time, they were united into one large tribe, but due to their nomadic ways, gradually separated into small distinct tribes, having no affiliation with one another. Though of slighter build and shorter stature than neighboring tribes, they were described as having great savageness. Their complete isolation in the Rocky Mountains and their reputation for merciless and cold-blooded savagery cause them to be dreaded by other tribes. Though nomadic, they didn’t sleep in tents, but rather brush huts that were often open to the weather. Subsisting on wild game, they didn’t fish, looking upon it as an unmanly occupation. They had no chiefs but the oldest and most influential in each band was looked upon for council. In 1893, they were divided into nine tribes, each being composed of a number of bands.

Semiahmoo – A Salishan tribe who lived about the Semiahmoo Bay in northwest Washington and southwest British Columbia.  In 1843 they numbered about 300 and in 1909 there were 38 of the tribe on the Canadian side.

Seminole – One of the Five Civilized Tribes, and part of the Creek Confederation, the Seminole originally were made up of emigrants from the Lower Creek towns on the Chattahoochee River, who moved down into Florida following the destruction of the Apalachee and other Native American tribes. They were at first classed with the Lower Creek tribe but began to be known under their present name about 1775. 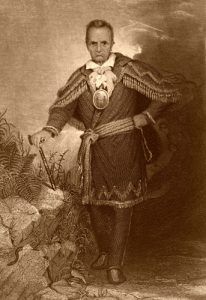 Senijextee – A Salishan tribe formerly residing on both sides of Columbia River from Kettle Falls to the Canadian boundary; they also occupied the Valley of Kettle River; Kootenay River form its mouth to the first falls, and the region of the Arrow Lakes, British Columbia. In 1909 those in the United States numbered 342 on the Colville Reservation, Washington.

Serrano – A Shoshonean division located primarily in the San Bernardino Mountains of southern California, their name is Spanish for “highlander,” or “mountaineer.” They also ranged north of Los Angeles and extended down the Mohave River to present-day Daggett, California, and occupied the San Bernardino Valley. Fray Francisco Garcés in 1775, described them as living near Tejon Creek, under their Mohave name of Cuahajai or Cuabajay, in large square communal houses made of toile mats on a framework of willow limbs. They made small baskets, flint knives, and vessels inlaid with mother-of-pearl, and conducted much trade with the natives of the coast near Santa Barbara. The Serrano on the upper waters of Santa Ana River, he also called by their Mohave name – Jenequich. Fray described them as approachable, quiet, inoffensive, and having good hearts. Physically, he said they were of medium stature, round-faced, flat-nosed, and rather ugly. The men generally went naked while the women covered themselves with deerskins. The Serrano were brought under the San Gabriel and San Fernando Missions. In 1885, there were 390 Serrano counted under the Mission agencies, but afterward, they were no longer separately counted.

Sewee – A small tribe who formerly lived in east South Carolina, occupying the lower part of the Santee River and the coast westward to the divide of Ashley River. Nothing is known of their language, but judging by their alliances and their final incorporation with the Catawba, they are assumed to have been Siouan. Explorer, John Lawson, met them in 1701 when they were living at the mouth of Santee River, and said that they had been a large tribe, but had been wasted by alcohol and smallpox. Lawson also stated that the Sewee undertook to send a fleet of canoes to England, along with most of their able-bodied men, for the purpose of trade. However, a storm swamped most of the canoes, and the survivors were rescued by an English ship and sold as slaves in the West Indies. In 1715, there remained but one village of 57 souls. The Yamasee War of that year probably put an end to their separate existence as a tribe, forcing the survivors to join the Catawba.

Shakori – A small tribe associated with the Eno and Adshusheer in North Carolina in the 17th century. It is doubtful, from their physical characteristics, whether they were of Siouan stock, though they were allied with Siouan tribes. As the Shakori were constantly associated with the Eno, they were probably linguistically related to them. They are first mentioned by explorer, Francis Yardley in 1654, who said a Tuscarora Indian described to him “a great nation called Cacores,” who were of dwarfish stature, yet exceedingly brave and fierce in fight, so that even the powerful Tuscarora were unable to conquer them. Explorer, John Lederer encountered them in 1672, finding the Shakori and Eno villages close to each other. By the time that Surveyor General, John Lawson came upon them in 1701, the Shakori and Eno had confederated and had also brought the Adshusheer tribe in with them. At that time, they were living just northeast of present-day Durham, North Carolina. 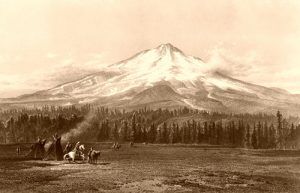 Mount Shasta has cultural significance for the Shasta Tribe

Shasta – The Shasta Indians were a group of small tribes or divisions forming the Shastan linguistic family of northern California and extending into southwestern Oregon. Their language was of the Hokan family. The Shasta called themselves “Kahosadi” or “plain speakers.”  Today, many of the descendants of the tribe live on three reservations in California Oregon.

Shawnee – An Algonquian tribe, the Shawnee were original inhabitants of modern-day Ohio, but were far-ranging people with villages located as far north as New York state and as far south as Georgia. Their name translates to “Southerners.” During the French and Indian War, most Shawnee fought on the side of the French. During the Revolutionary War, the Shawnee fought on the side of the British. Most Shawnee today live in Oklahoma, but the Shawnee Nation United Remnant Band, what was left of the Eastern Shawnee, have been officially recognized in the State of Ohio.