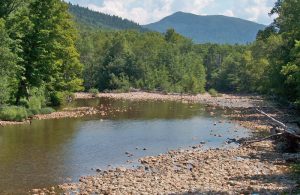 Armouchiquois was the name given by the Abnaki Indians to the people who lived south of Saco River on the coast of Maine. There is little known about this group.

In 1605, when French explorer, Samuel de Champlain visited a  large native village at the mouth of the Saco River, his Etchemin Indian guides called the people Armouchiquois and called the village Chouacoit. It was a large, permanent, palisaded settlement, and the area was filled with small native hamlets, all cultivating corn, bean, and squash fields. In 1607, Chouacoit was hit hard in a raid by the Souriquoi and their allies. Thus began a war that lasted until about 1615, apparently ending with disastrous losses for the Armouchiquois. In 1616, the village was hit hard by disease and most of its inhabitants took sick and died. By 1631, the village was gone.

In Joseph Williamson’s History of Maine, published in 1832, he said they were the same as the Maliseet tribe living on the  St. John’s River, but Champlain had earlier said that their language differed from the Mi’kmaq and the Etchimin bands which were also of the Maliseet tribe. Some Frenchmen used the term to describe several tribes that the English included under the term “Massachusetts.” In Francis Parkman’s book, Jesuits in North America, published in 1867, the term included the Algonquian tribes of New England, including the Mohegan, Pequot, Massachusett, Narragansett and others who were in a chronic state of war with the tribes of New Brunswick and Nova Scotia.