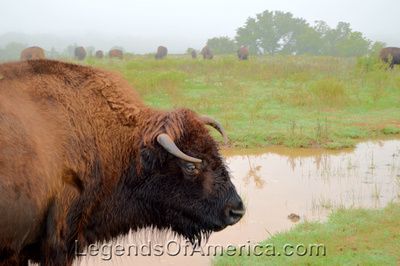 The ancient range of the buffalo, according to history and tradition, once extended from the Alleghanies to the Rocky Mountains, embracing all that magnificent portion of North America known as the Mississippi valley; from the frozen lakes above to the “Tierras Calientes” of Mexico, far to the south.

It seems impossible, especially to those who have seen them, as numerous, apparently, as the sands of the seashore, feeding on the illimitable natural pastures of the Great Plains, that the buffalo should have become almost extinct. 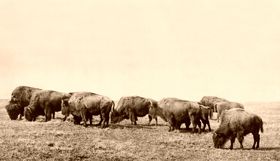 When I look back only twenty-five years, and recall the fact that they roamed in immense numbers even then, as far east as Fort Harker, in Central Kansas, a little more than two hundred miles from the Missouri River, I ask myself, “Have they all disappeared?”

An idea may be formed of how many buffalo were killed from 1868 to 1881, a period of only thirteen years, during which time they were indiscriminately slaughtered for their hides. In Kansas alone there was paid out, between the dates specified, two million five hundred thousand dollars for their bones gathered on the prairies, to be utilized by the various carbon works of the country, principally in St. Louis. It required about one hundred carcasses to make one ton of bones, the price paid averaging eight dollars a ton; so the above-quoted enormous sum represented the skeletons of over thirty-one millions of buffalo. These figures may appear preposterous to readers not familiar with the Great Plains a third of a century ago; but to those who have seen the prairie black from horizon to horizon with the shaggy monsters, they are not so. In the autumn of 1868 I rode with Generals Sheridan, Custer, Sully, and others, for three consecutive days, through one continuous herd, which must have contained millions. In the spring of 1869 the train on the Kansas Pacific Railroad was delayed at a point between Forts Harker and Hays, from nine o’clock in the morning until five in the afternoon, in consequence of the passage of an immense herd of buffalo across the track. On each side of us, and to the west as far as we could see, our vision was only limited by the extended horizon of the flat prairie, and the whole vast area was black with the surging mass of frightened buffalo as they rushed onward to the south.

In 1868 the Union Pacific Railroad and its branch in Kansas was nearly completed across the plains to the foothills of the Rocky Mountains, the western limit of the buffalo range, and that year witnessed the beginning of the wholesale and wanton slaughter of the great ruminants, which ended only with their practical extinction seventeen years afterward. The causes of this hecatomb of animals on the Great Plains were the incursion of regular hunters into the region, for the hides of the buffalo, and the crowds of tourists who crossed the continent for the mere pleasure and novelty of the trip. The latter class heartlessly killed for the excitement of the new experience as they rode along in the cars at a low rate of speed, often never touching a particle of the flesh of their victims, or possessing themselves of a single robe.   The former, numbering hundreds of old frontiersmen, all expert shots, with thousands of novices, the pioneer settlers on the public domain, just opened under the various land laws, from beyond the Platte River to far south of the Arkansas River, within transporting distance of two railroads, day after day for years made it a lucrative business to kill for the robes alone, a market for which had suddenly sprung up all over the country.

On either side of the track of the two lines of railroads running through Kansas and Nebraska, within a relatively short distance and for nearly their whole length, the most conspicuous objects in those days were the desiccated carcasses of the noble beasts that had been ruthlessly slaughtered by the thoughtless and excited passengers on their way across the continent. On the open prairie, too, miles away from the course of legitimate travel, in some places one could walk all day on the dead bodies of the buffalo killed by the hide-hunters, without stepping off them to the ground.

The best robes, in their relation to thickness of fur and luster, were those taken during the winter months, particularly February, at which period the maximum of density and beauty had been reached.

Then, notwithstanding the sudden and fitful variations of temperature incident to our mid-continent climate, the old hunters were especially active, and accepted unusual risks to procure as many of the coveted skins as possible.

A temporary camp would be established under the friendly shelter of some timbered stream, from which the hunters would radiate every morning, and return at night after an arduous day’s work, to smoke their pipes and relate their varied adventures around the fire of blazing logs.

Sometimes when far away from camp a blizzard would come down from the north in all its fury without ten minutes’ warning, and in a few seconds the air, full of blinding snow, precluded the possibility of finding their shelter, an attempt at which would only result in an aimless circular march on the prairie. On such occasions, to keep from perishing by the intense cold, they would kill a buffalo, and, taking out its viscera, creep inside the huge cavity, enough animal heat being retained until the storm had sufficiently abated for them to proceed with safety to their camp.

Early in March, 1867, a party of my friends, all old buffalo hunters, were camped in Paradise valley, then a famous rendezvous of the animals they were after. One day when out on the range stalking, and widely separated from each other, a terrible blizzard came up. Three of the hunters reached their camp without much difficulty, but he who was farthest away was fairly caught in it, and night overtaking him, he was compelled to resort to the method described in the preceding paragraph. Luckily, he soon came up with a superannuated bull that had been abandoned by the herd; so he killed him, took out his viscera and crawled inside the empty carcass, where he lay comparatively comfortable until morning broke, when the storm had passed over and the sun shone brightly. But when he attempted to get out, he found himself a prisoner, the immense ribs of the creature having frozen together, and locked him up as tightly as if he were in a cell. Fortunately, his companions, who were searching for him, and firing their rifles from time to time, heard him yell in response to the discharge of their pieces, and thus discovered and released him from the peculiar predicament into which he had fallen.

At another time, several years before the acquisition of New Mexico by the United States, two old trappers were far up on the Arkansas River near the Trail, in the foot-hills hunting buffalo, and they, as is generally the case, became separated. In an hour or two one of them killed a fat young cow, and, leaving his rifle on the ground, went up and commenced to skin her. While busily engaged in his work, he suddenly heard right behind him a suppressed snort, and looking around he saw to his dismay a monstrous grizzly ambling along in that animal’s characteristic gait, within a few feet of him.

In front, only a few rods away, there happened to be a clump of scrubby pines, and he incontinently made a break for them, climbing into the tallest in less time than it takes to tell of it. The bear deliberately ate a hearty meal off the juicy hams of the cow, so providentially fallen in his way, and when he had satiated himself, instead of going away, he quietly stretched himself alongside of the half-devoured carcass, and went to sleep, keeping one eye open, however, on the movements of the unlucky hunter whom he had corralled in the tree. In the early evening his partner came to the spot, and killed the impudent bear, that, being full of tender buffalo meat, was sluggish and unwary, and thus became an easy victim to the unerring rifle; when the unwilling prisoner came down from his perch in the pine, feeling sheepish enough. The last time I saw him he told me he still had the bear’s hide, which he religiously preserved as a memento of his foolishness in separating himself from his rifle, a thing he has never been guilty of before or since.