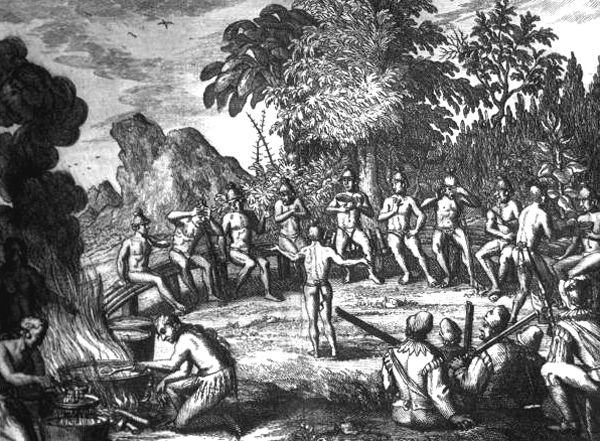 “They be all naked and of goodly stature, mighty, faire and as well shapen…as any people in all the worlde, very gentill, curtious and of good nature… the men be of tawny color, hawke nosed and of a pleasant countenance…the women be well favored and modest…”

The Timucua were the Native American people living in the Northeast and North Central portions of Florida. Their name may derive from the Spanish pronunciation of the Timucuan word atimoqua, which means “lord” or “chief.” The Timucua probably numbered between 200,000 and 300,000 people organized into various chiefdoms speaking a common language. The earliest evidence of their presence dates from around 3000 BC.

Semi-nomadic, during the mild Fall and Winter months, the Timucua lived in the inland forests. They planted maize, beans, squash, melons, and various root vegetables as part of their diet employing “slash and burn” technology. Large growth would be cut, and then the fields would be cleared with fire. The soil would be turned and broken utilizing the nitrates in the ash as an effective fertilizer. They would also collect wild fruits and berries and bake bread made from the root starch of the koonti plant. They cultivated tobacco and utilized a communal food storage system suggesting crop surpluses.

Timucuans also hunted game, including deer, alligator, bear, turkey, and possibly eastern bison. They would migrate to the cooler seashores during the hot summers, where they would fish and collect oysters and shellfish. The evidence of their culture still exists in the many shell middens, essentially Indian trash piles, still found in Florida’s coastal areas.

The Spanish sent several expeditions through the Central Florida area during the first half of the 16th century, primarily looking for gold and other exploitable natural resources. Most of their impact fell on the Timucua. Juan Ponce de Leon landed near present St. Augustine in 1513, claiming Eastern North America for the Spanish crown and giving it the name La Florida. Later, in 1528, the Panfilo de Narvaez expedition landed at Tampa Bay and explored the western fringes of the Timucua territory. In 1539, Hernando de Soto led more than 500 men in a devastating entrada through central and north Florida. His army seized food, took women for consorts, and forced men to serve as guides and bearers. The army fought two battles with the Timucua, killing hundreds. De Soto also released hogs into the forests to breed a food supply for later expeditions; these preyed on traditional Timucuan food sources and were in turn hunted by them, further changing their habitat and lifestyle.

Spanish explorers were shocked at the size of the Timucua, well built and standing four to six inches or more above them. Perhaps adding to their perceived height was that Timucuan men would wear their hair in a bun on top of their heads. All were heavily tattooed, and such tattoos were gained by deeds, usually in hunting or war. These elaborate decorations were created by poking holes in the skin and rubbing ashes into the holes. The Timucua were dark-skinned with black hair. They wore minimal clothing woven from moss or crafted from various animal skins.

Much of what we know about early Timucuan culture comes not from the Spanish but from the French. In 1564, French Huguenots seeking refuge from persecution in France founded Fort Caroline along the St. Johns River in present-day Jacksonville. After the initial conflict, the Huguenots established friendly relations with the local natives in the area. Sketches and notes of the Timucua by Jaques le Moyne, one of the French settlers, are one of the few primary resources about these people.

The Timucua’s history changed even more dramatically after the establishment of St. Augustine in 1565 as a Spanish Presidio. Having eliminated the French settlements, the Spanish began to establish missions among the Timucuan chiefdoms. The Franciscan missionaries Christianized and Hispanized the Indians. Fortunately, through their scholarship, the friars preserved the Timucuan language, one of the few eastern tribal languages to have survived.

By 1595, contact with Europeans and the diseases they brought with them had decimated the majority of the Timucuans. By 1700, the Timucuan population had been reduced to a mere 1000. Spanish colonization, which relied on intermarriage with local populations, also absorbed many of the Timucuans into the mestizo, i.e., “mixed blood” colonial culture

British incursions during the early 18th century further reduced the Timucua. The rival European nations relied on Indian allies to fight their colonial wars. The English allied tribes, the Creek, Catawba, and Yuchi, killed and enslaved the Timucua, who were associated with the Spanish. By the end of the French and Indian War and the acquisition of Florida by Britain in 1763, there were perhaps 125 remaining. This last remnant either migrated with the Spanish colonists to Cuba or were absorbed into the Seminole population. They are now considered an extinct tribe.
More Information: 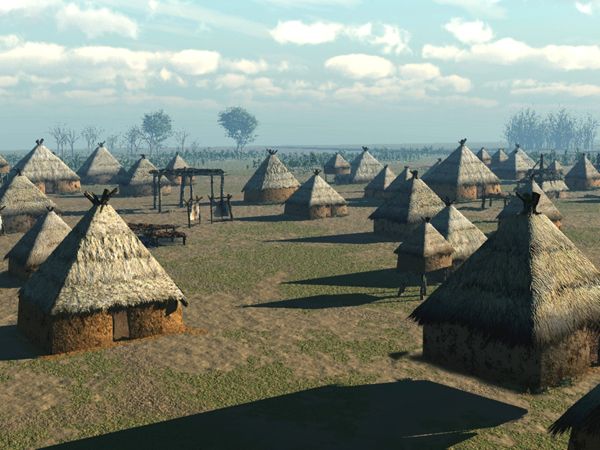