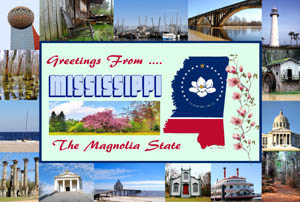 Here, in Mississippi, you’ll find the true character of the Old South in the scents of the magnolia blossoms, stately antebellum mansions, large plantations, numerous historic sites, and dozens of small towns and farms.

Mississippi is named for the Mississippi River which forms its western boundary and empties into the Gulf of Mexico. The name translates from the Chippewa words “mici zibi” meaning “great river” or “gathering in of all the waters” and the Algonquin word “Messipi”.

Mississippi was organized as a territory in 1798 and was admitted as the 20th state to join the Union on December 10, 1817. Jackson is the capital city and the largest metropolitan area.

From beaches, to music, to Civil War sites and more, there is something for everyone in the Magnolia State. Check out the Mississippi Delta, the birthplace of the Blues, or Oxford, Mississippi that is home to a thriving music scene comparable to Austin, Texas, and Athens, Georgia.

See places under the management of the National Park Service including Brices Cross Roads National Battlefield Site, the Gulf Islands National Seashore, the Natchez Trace Parkway, and the Vicksburg National Military Park. Travel the Great River Road for majestic views of the Mississippi River, historic towns, Civil Rights efforts, rich heritage, and folklore. And, don’t forget to take a peek at the many antebellum homes and listen for the many ghost stories of Natchez.

Enjoy your visit to the Magnolia State.

Mississippi’s original flag that featured the Confederate emblem was approved on February 7, 1894. However, a new flag was voted to take its place in November 2020. The flag features a white magnolia blossom on a dark blue backdrop, with red bands and gold stripes — fitting for the Southern state whose nickname is the Magnolia State. The flower is surrounded by 20 stars, signifying Mississippi’s status as the 20th state in the Union, and a gold five-point star to reflect Mississippi’s indigenous Native American tribes.

Bruinsburg to Port Gibson in the Vicksburg Campaign

Grand Gulf – A Bustling Port Along the River

States may sing their songs of praise
With waving flags and hip-hoo-rays,
Let cymbals crash and let bells ring
Cause here’s one song I’m proud to sing.