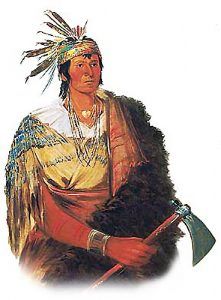 The Miami is a Native American nation originally from northern Indiana and the adjacent areas of Illinois, Michigan, and Ohio. Originally speaking one of the Algonquian languages, the Miami had the reputation of being slow-spoken and polite with an inclination towards elaborate dress, especially among their chiefs. In the Miami language, the tribe’s name for itself is Myaamia, which means “the Downstream People.” The early Miami people were agriculturally based and well as being hunters. Tattooing was common to both sexes.

The tribe was first encountered by French missionaries in the mid-17th century when they were living around the shores of Lake Michigan. By the 18th century, they were mostly living in present-day Indiana and Ohio. However, with the eventual victory of the British in the French and Indian War, more white settlers moved upon their lands which led to some of the Miami bands merging. These larger tribal confederacies allied to participate in the European wars and to fight advancing white settlement. By the end of the century, the tribal divisions were the Miami, the Piankeshaw, and the Wea. The Piankeshaw and the Wea were closely aligned with some of the Illini tribes and were later “merged” with them for administrative purposes.

The first treaty with the United States to which the Miami were a party was concluded at Greenville, Ohio on August 3, 1795. It was a treaty of peace, and also a definite settlement, for the time, of the boundary between the United States and various Northern and Central contracting tribes. It was consummated by Major General Anthony Wayne, commanding the army of the United States, and sole Commissioner at Greenville, the army’s headquarters. The Miami were represented by their principal chief, Little Turtle, who when asked tell the limits of his country, he answered:

“My forefather kindled the first fire at Detroit; from thence he extended his line to the headwaters of the Scioto; from thence to its mouth; from thence to the mouth of the Wabash, and from thence to Chicago, on Lake Michigan. These are the boundaries within which the prints of my ancestors’ houses are everywhere to be seen.” 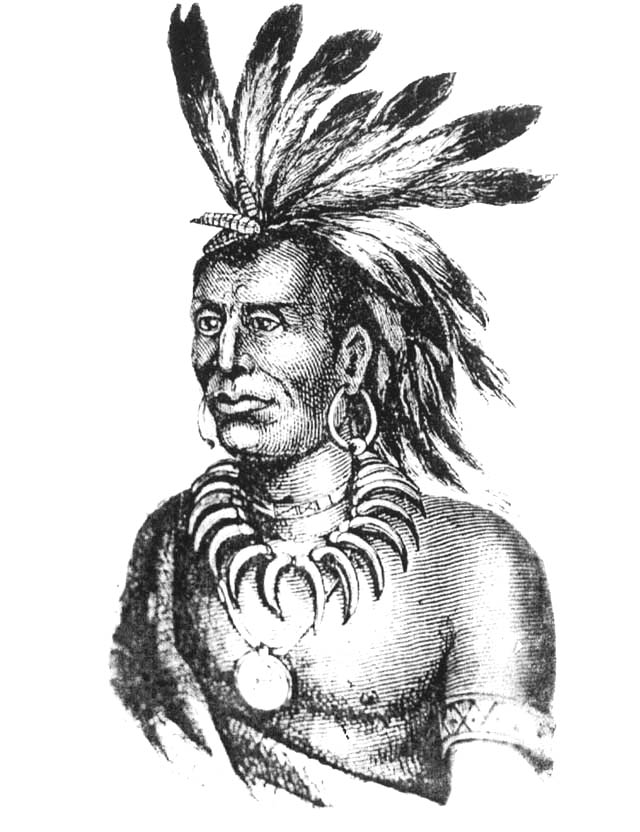 The Treaty of Mississinewas was, signed in 1826, took away most of the Miami lands and gave them to the United States government. It also allowed Miami lands to be held as private property by individuals. On November 28, 1840, and the following described tract was given them for a future home in present-day Kansas: “A tract bounded on the east by the State of Missouri; on the north by the country of the Wea and Piankeshaw; on the west by the Potawatomie of Indiana; and on the south by the land assigned to the New York Indians.” This tract was estimated to contain 500,000 acres. When the Miami were officially removed in 1846, those with private property were allowed to stay in Indiana, while the rest of the tribe was moved to the Kansas reservation.

By virtue of this treaty, the Miami located in the southeastern part of the present-day Miami County, Kansas. About 1,100 people settled on Sugar Creek during 1846-47, of whom nearly half returned to Indiana the following year. Sickness so decimated the ranks of those who remained that only about 300 were left when the band removed to the banks of the Marais des Cygnes River. Their principal village was on the east bank of the river with the small settlement composed of mission buildings, an Indian Agency, and a few log houses occupied by pioneer white settlers.

On June 5, 1854, the Miami Indians ceded to the United States all the land acquired by the treaty of 1840, except 70,000 acres for their future homes, and also a section of 640 acres for school purposes.

Another treaty in February 1867 provided that all members of the tribe wishing to become citizens of  Kansas could do so and those who elected to continue tribal relations would remove to Indian Territory in northeastern Oklahoma. Descendents of the Miami who remained in northern Indiana still live in their original homeland of northern Indiana. 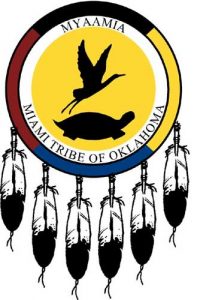 Compiled by Kathy Weiser/Legends of Kansas, updated May 2020.