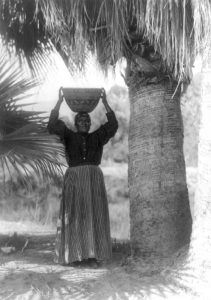 The Cahuilla people are natives of the inland areas of southern California. Uto-Aztecan peoples arrived in southern California about 2,000-2,500 years ago. They originally ranged over the entire San Bernardino Basin, the San Jacinto Mountains, the Coachella Valley, and portions of the southern Mojave Desert.

Living in independent clans of approximately 600-800 people, each clan controlled its separate territories. These peaceful hunter-gatherers used throwing sticks, clubs, nets, spring-poled snares, and often poison-tipped arrows to provide game for their clans. The tribe did not encounter Europeans until 1774 when Spanish explorer Juan Bautista de Anza looked for a trade route between Mexico and California.

Living far inland, the Cahuilla had little contact with Spanish soldiers or priests, nor missionaries. During the Mexican-American War, the Cahuilla joined the Californios, and in the treaty to end the war, the government promised to recognize Native American rights to inhabit certain lands. However, the white settlement on Indian lands became an increasing problem after the U.S. annexed California, especially after gold was discovered. When the California Senate refused to ratify an 1852 treaty granting the Cahuilla control of their lands, tribal leaders resorted to attacks on approaching settlers and soldiers. In the end, the U.S. government subdivided their lands into reservations in 1877. 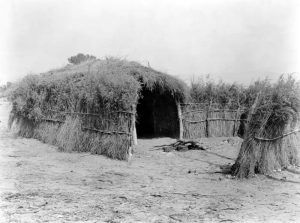 Cahuilla house in the desert, California by Edward S. Curtis, 1924

Today there are nine Southern California reservations that are acknowledged homes to bands of Cahuilla people. These are located in Imperial, Riverside, and San Diego Counties.