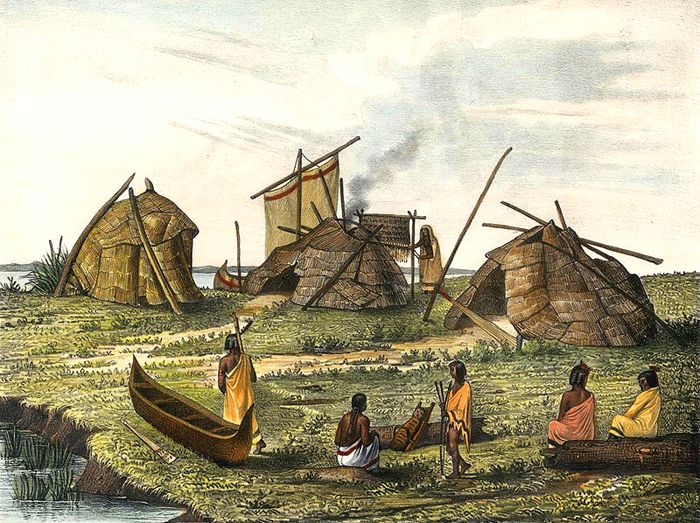 The Ottawa, also known as the Odawa, are an Algonquian-speaking tribe who originally lived on the East Coast and migrated into Michigan, Ohio, and southern Canada. Their name is from the Indian word “adawe,” meaning “traders,” because they had long been known as intertribal traders and barterers. They called themselves Nishnaabe, meaning “original people.”

After migrating from the East Coast in ancient times, they settled on Manitoulin Island, Lake Huron, Michigan’s Upper Peninsula, and the Bruce Peninsula in Ontario, Canada. They considered this their original homeland.

The Ottawa were part of a long-term alliance, called the Council of Three Fires, with the Ojibwe and Potawatomi, who had shared or similar language, manners, and customs. These three tribes fought the Iroquois Confederacy and the Dakota people. They were also enemies with the Wyandot because of their ties to the Iroquois.

In 1615 they had their first contact with Europeans with French explorer Samuel de Champlain near the mouth of the French River. Of the Ottawa, Champlain said:

“Their arms consisted only of a bow and arrows, a buckler of boiled leather, and the club. They wore no breechclouts, their bodies were tattooed in many fashions and designs, their faces painted and their noses pierced.”

From the start of the colony of New France (Canada), the Ottawa became important to the French in the fur trade business. In 1701 the French colonists built Fort Detroit in Michigan and established a trading post there. Many Ottawa moved there from their traditional homeland. They soon began to spread out to the south of the Great Lakes into the Midwest. 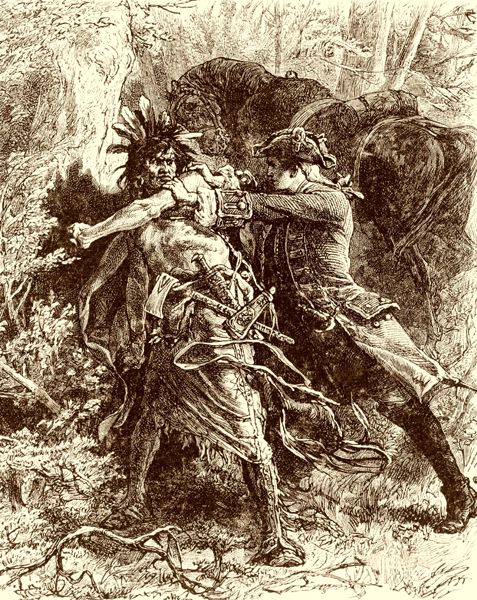 Struggle between a Mohawk Indian and a colonial militiaman

Over the years, competition in the fur trade caused disputes between the Ottawa and other tribes. In the mid-17th century, they were allied with other Algonquian tribes around the Great Lakes against the powerful Mohawk, who had moved westward from New York. The traditional balance of power in the region had been destroyed by the European introduction of firearms, producing disastrous consequences. All the Indians on both sides were disrupted, and some, such as the Iroquoian Erie, were exterminated. In addition to the wars, the tribes were more severely affected by infectious diseases brought by the Europeans.

In the mid-18th century, the Ottawa allied with their French trading partners against the British in the French and Indian War (1754-1763), making raids against Anglo-American colonists.

Immediately after the Treaty of Paris brought the war to a close, Ottawa Chief Pontiac began to organize a group of American Indian tribes against the British. The land previously controlled by the French was now under British control. The tribes in Ohio, Illinois, and the Great Lakes region feared the loss of their French allies and the influx of colonists from east of the Appalachian Mountains settling on their land. Pontiac determined to fight the British and started what is referred to as Pontiac’s Rebellion (1763-1766). The united tribes included the Ottawa, Ojibwa, Potawatomi, Huron, Miami, Wea, Kickapoo, Mascouten, Piankashaw, Delaware, Shawnee, and the Seneca. 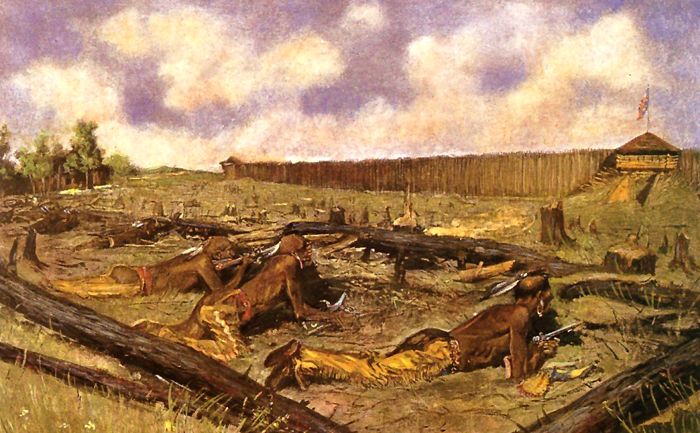 The Ottawa attacked Fort Detroit in May 1763, beginning the rebellion. Soon, the Shawnee, Wyandot, Seneca, and Delaware people also raided British settlements in the Ohio Country and western Pennsylvania. It is estimated that by the late fall of 1763, Pontiac’s forces had killed or captured more than 600 people. Britain’s only garrisoned fort in Ohio, Fort Sandusky, fell to the Ottawa that same year. Ultimately, the tribes destroyed nine out of eleven British forts in the Great Lakes region.

In the autumn of 1764, the British military took the offensive against Pontiac’s forces. It launched invasions into Ohio, and many tribes, including the Ottawa, surrendered, effectively ending the rebellion. However, Chief Pontiac did not formally surrender until July 1766.

Over the subsequent decades, the colonists would continue to move westward, settling on the territorial lands of the Native Americans and creating continual conflict. During the American Revolution, the Ottawa allied with the British, hoping to stop the influx of Americans into their territory. But, it would never end. 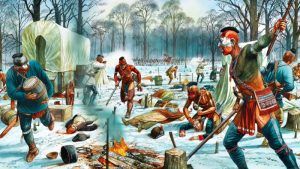 Following the Revolutionary War, the Shawnee began to forge a confederacy to oppose U.S. occupation of the land ceded by the British in what became called the Northwest Territory (now the Midwest of the United States). The Northwest Indian War began in 1785, just two years after the American Revolution ended. Hoping to repulse the American pioneers from settling west of the Appalachian Mountains, the regional tribes, including the Council of Three Fires, Wyandot, Lenape, and Mingo, joined with the Shawnee and fought a series of battles against the United States. These efforts were clandestinely supported by the British, who had refused to abandon Fort Detroit and Fort Mackinac as called for in the 1783 peace treaty with the United States. In 1794, General Anthony Wayne built a string of forts in the region. He fought several hundred members of the Indian confederacy at the Battle of Fallen Timbers in August 1794 near the present-day site of Maumee, Ohio. The defeated tribes were forced to cede extensive territory, including much of present-day Ohio, in the Treaty of Greenville in 1795.

In 1807, the Detroit Ottawa joined with the Ojibwe, Potawatomi, and Wyandot people, in signing the Treaty of Detroit under pressure from the United States. The agreement gave the United States a large portion of today’s Southeastern Michigan and a section of northwest Ohio. Many of the Ottawa band then moved into northern Michigan. 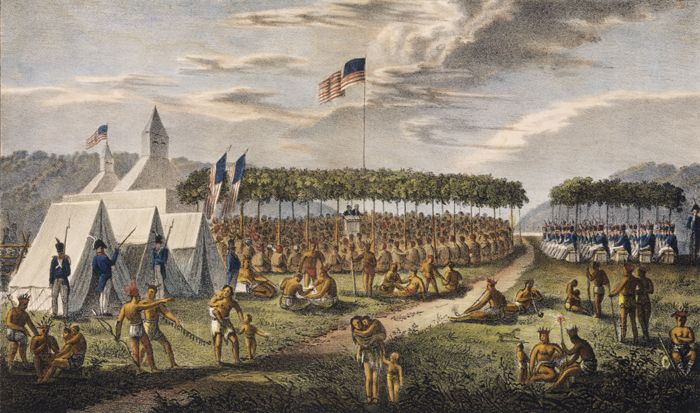 Great Treaty held at Prarie du Chien, Wisconsin, were numerous tribes, including the Ottawa, gave up their lands in 1825 by J.O. Lewis.

After the passage of the Indian Removal Act of 1830, the U.S. government arranged for the Ottawa to cede all of its reserves in 1831. In 1833, the United States forced the Ottawa to give up its few remaining lands in Ohio. In 1837, they were removed west of the Mississippi River to Iowa and then to Kansas. Nearly half of Ottawa had died within five years of moving to Kansas. In 1862, the Ottawa were allotted 74,000 acres of land to be used and sold to raise money to build a Baptist school for the education of whites and Indians in the area. This school later became the University of Ottawa, which is still active today.

In 1867, the Ottawa sold their land in Kansas and moved into Indian Territory in Oklahoma. More of the Ottawa had died by this time, and only about 200 were left. In Oklahoma, they entered into a contract with the Shawnee tribe to purchase approximately 14,863 acres and formed a reservation.

Over the years, many Ottawa, mainly Roman Catholic members, moved back to their original homeland in Ontario.

In 1956, the U.S. government decided that the Oklahoma Ottawa served no purpose and terminated them. The Ottawa fought back and were reinstated as a federally recognized tribe in 1978.

Today there are more than 10,000 Ottawa in the United States, with the majority in Michigan. Another several thousand live in Ontario, Canada. 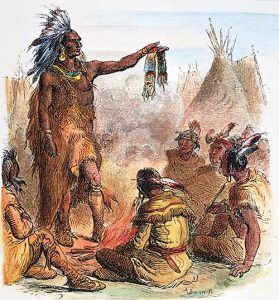