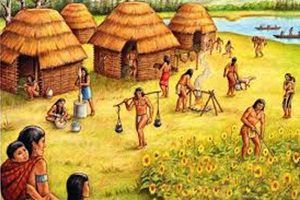 From the years of about 1000 B.C. to about 1 A.D. the Adena people were a group of well-organized societies that lived in parts of present-day Ohio, Indiana, Wisconsin, West Virginia, Kentucky, Pennsylvania, Maryland, and New York.

The Adena people were not a single tribe, but rather, a group of indigenous people that shared similarities in artifact style, architecture, and other cultural practices, including a common burial and ceremonial system that included mound building. The Adena were the first group of “mound builders,” a practice that spanned several cultures over a period of about 20 centuries.

Building these mounds was a monumental task as these ancient people didn’t use the wheel and had no horses. Large amounts of earth would have to have been moved by the basket-load to the mound site. Probably, for this reason, the mounds were used more than once. Over the years, more earth was brought in and the mounds were built higher and higher, containing multiple burials at different levels. 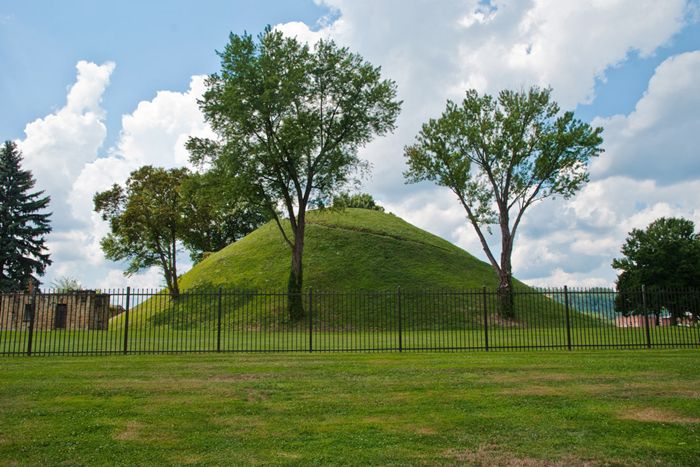 Most of the mounds range in size from 20 to 300 feet in diameter. However, the conical-type Grave Creek Mound in Moundsville, West Virginia, is much larger. The largest of Adena’s burial mounds, standing at 62 feet high and is 240 feet in diameter, is thought to have been built over a period of 100 years or more.

According to research, these earthworks not only served for burial purposes, but also as ceremonial sites and as territorial markers. They were built and added on to as part of their burial rituals. Some people were cremated while others were buried intact.

A mortuary structure stood atop or near the mound, where the dead would be kept until their final burial was performed. Within this structure, the remains would lie and grave goods of tools and other necessary items for the afterlife would be placed. After a period of time, the structure would be burned with the goods and honored dead within, and become part of the mound.

For important people, such as clan leaders, healers, and shaman, however, their bodies were buried on the mound with a variety of artifacts such as bone or flint tools, beads, jewelry, pipes and mica, and copper ornaments. These included both men and women of all ages. 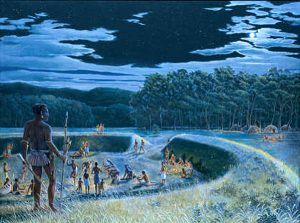 In the later Adena period, circular ridges were sometimes constructed around the burial earthworks which are thought to have been ritual spaces.

The name “Adena” originates from the estate of Ohio Governor Thomas Worthington, which was located about a mile and a half northwest of Chillicothe, Ohio. His estate, which he called Adena, included a 26-foot tall ancient burial mound, from which the culture and the mound took the name.

The Adena people were hunter-gatherers, but also grew various crops, including squash, sunflower, pumpkin, goosefoot, and tobacco. They lived in extended family groups of roughly 15 to 20 people, with several extended families forming a lineage or clan. Between four to six of these clans made up an Adena social group.

Their houses were circular with conical-shaped roofs, made of wood, bark, and wickerwork that were from 15 to 45 feet in diameter. Just a few of these dwellings formed a small village.

However, they were known to have traveled widely for hunting, gathering, and trading needs. They supplemented their gardens with gathering native plants, seeds, grasses, nuts, and berries, hunted game, and fished. Their wide trading network provided them with copper from the Great Lakes and shells from the Gulf Coast. 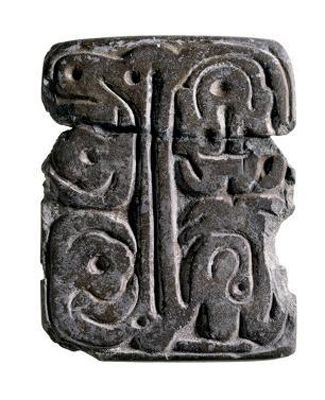 The Adena people were the first to produce clay pottery in the region, which was characterized by large, thick-walled vessels used for cooking, and other flatforms to grind seeds. They also made tools, including hoes, axes, and projectiles from stones, bones, and antlers. They also made use of plant fibers and sinew to make twine, cord, and yarn, which they turned into bags, shoes, and clothing. They used herbal medicines to treat ailments.

Beads, combs, and ornamental objects were also made from bone and antler, and spoons, beads and other implements were made from the conch shells. A few copper axes have been found, but the copper was usually used for ornamental forms and jewelry.

They were also renowned for their artistry. They created numerous pieces with art motifs, such as the weeping eye, cross, and circle designs, that became mainstays to many later Native Americans tribes. Many of their designs revolved around the transformation of humans into animals, such as birds, wolves, bears and deer, and then back to human form. Antlers, animal jawbones, copper, beads, and jewelry were used in costumes and other forms of regalia. They carved small stone tablets which bore animal pictures and geometric designs, that may have been used to stamp designs on cloth or animal hides, or onto their own bodies.

In about 500 B.C., the Adena culture began slowly to give way to a more sophisticated culture, the Hopewell Culture. These people were also mound builders, whose primary period was between 1 A.D. to 700 A.D. The Hopewell people began to build larger earthworks and to expand their efforts to acquire exotic raw materials, such as mica and more copper. Other cultures extended Mound Builders to about 1300 A.D. 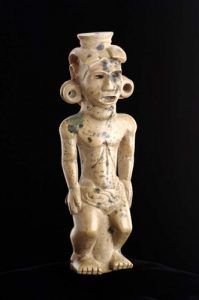 At one time the Adena mound sites numbered up to 200, but only a small number of them remain today. Some of these include the Criel and Grave Creek Mounds in West Virginia, and the Adena, Biggs, Enon, Miamisburg, and Wolf Plains Mounds in Ohio.

Years later, when some of these burial mounds were excavated, there were a number of very tall skeletons that were found, which led to numerous tales of “Giants in America.”