The Lewis and Clark expedition (1804-1806) was the first United States overland expedition to the Pacific coast and back.

The Louisiana Purchase in 1803 sparked interest in expansion to the west coast. A few weeks after the purchase, United States President Thomas Jefferson, an advocate of western expansion, had U.S. Congress appropriate $2,500 to send a small U.S. Army unit to explore the west to the Pacific Ocean. Along their way, they were instructed to study and make detailed reports on the Indian tribes, geography, climate, plants, and animals and evaluate the potential interference of British and French-Canadian hunters and trappers who were already well established in the area. In addition, one of Jefferson’s main objectives was for the unit to find a waterway that would connect the east to the west.

Jefferson selected 28-year-old Army Captain Meriwether Lewis to lead the expedition, afterward known as the Corps of Discovery. Lewis, in turn, selected a former Army comrade, 32-year-old William Clark, to be co-leader of the Expedition. Due to bureaucratic delays in the U.S. Army, Clark officially only held the rank of Second Lieutenant at the time. Still, Lewis concealed this from the men and shared the expedition’s leadership, always referring to Clark as “Captain.”

Lewis and Clark reached their staging point at the confluence of the Mississippi and Missouri Rivers near St. Louis, Missouri, in December 1803. There they camped for the winter at the mouth of Wood River, on the Illinois side of the Mississippi River. Over the winter, the two captains recruited young woodsmen, boatmen, and enlisted soldiers who volunteered from nearby army outposts. 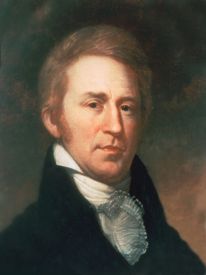 By spring, the group, comprised of approximately 40 men, began their historic journey on May 14, 1804. They laboriously worked their way westward on the Missouri River through the long, hot summer, soon passing Le Rochette, the last white settlement on the Missouri River. They continued through what is now Kansas City, Missouri, then along the present-day borders of Kansas, Nebraska, and Iowa. Along the way, the group experienced problems within its ranks, including disciplinary floggings, two desertions, and a man dishonorably discharged for mutiny. On August 20, 1804, the Corps of Discovery suffered its first and only death when Sergeant Charles Floyd died from what was thought to be an attack of acute appendicitis.

While in South Dakota, a band of Teton Sioux tried to detain their boats, but when the explorers showed their superior weapons, they were allowed to sail on.

They spent their first winter near present-day Washburn, North Dakota, among the Mandan Indians. On the north bank of the Missouri River, they constructed a log fort called Fort Mandan in honor of the local Indians. By this time, the expedition had traveled approximately 1,500 miles. The explorers spent the winter hunting, gaining information about the route ahead, and making tools they would later trade for supplies. While there, they met a French-Canadian trader named Touissant Charbonneau and his young pregnant Shoshone wife, Sacagawea.

Sacagawea’s tribal homeland lay in the Rocky Mountain country far to the west, and she spoke both the Shoshone and Minitari dialects. Lewis and Clark decided to hire Charbonneau and Sacagawea to accompany them, acting as guides and interpreters. Sacagawea’s son was born at Fort Mandan in February, and when the expedition set out again in April, the young family joined the expedition.

Along the way, Sacagawea proved even more helpful than they had initially thought, as she also acted as a peacemaker and negotiated for horses and supplies along the way.

The expedition continued by land, traveling across much of present-day Northern Idaho until reaching the Clearwater and Snake Rivers, where they again could journey by boat. The expedition moved more quickly by water, finally reaching Columbia River in mid-October. Continuing, they passed Celilo Falls and through what is now Portland, Oregon.

In November 1805, some 18 months after leaving St. Louis, Lewis spotted Mt. Hood, a mountain known to be very close to the ocean. However, winter was upon them, so they soon set up a permanent winter dwelling south of the Columbia River, near present-day Astoria, Oregon, which they called Fort Clatsop. The expedition spent the self-described long, wet winter preparing for the trip home by boiling salt from the ocean and hunting elk and other wildlife.

The explorers started their journey home on March 23, 1806, and on their return, Lewis and Clark split up. Clark led one group up the Yellowstone River, while Lewis led another group into North Central Montana and the Province of Alberta. In August, they met on the Missouri River and arrived back in St. Louis on September 23, 1806.

Lewis and Clark constantly collected samples of plants, animals, and birds throughout the journey while also documenting encounters with the many Indians they met along the way. Their detailed observations on their 8,000-mile round trip journey of climate, landscape, plant communities, and human and animal populations were valuable to an expanding nation.

Although the expedition failed to find the Northwest Passage, it significantly increased knowledge of the nation’s newly acquired territory and opened the doors to westward settlement.

After the expedition concluded, Lewis was made governor of the Louisiana Territory in 1807. His career started well, but two years later, a controversy involving government finances arose, and Lewis made plans to travel to Washington D.C. to resolve the dispute. Traveling through Tennessee, Governor Meriwether Lewis, on October 11, 1809, died mysteriously from gunshot wounds inflicted while at Grinder’s Stand, a public roadhouse. It is not known whether he was murdered or committed suicide. His grave lies where he died, within today’s Natchez Trace National Parkway near Hohenwald, Tennessee. 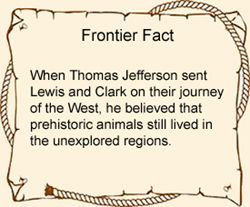 Meanwhile, Clark was made a brigadier general of the territory in March 1807. In 1813 he was appointed Governor of Missouri Territory, which he held until Missouri Statehood in 1820. In 1822 he was appointed Superintendent of Indian Affairs by President Monroe. He was reappointed to this post by each succeeding president and served in this capacity for the remainder of his life. General William Clark died of natural causes in St. Louis, September 1, 1838, and is buried in the Clark Family plot at Bellefontaine Cemetery in St. Louis, Missouri.

Many people follow the trail by auto, while the more adventurous can still find many sections that encourage boating, biking, or hiking. 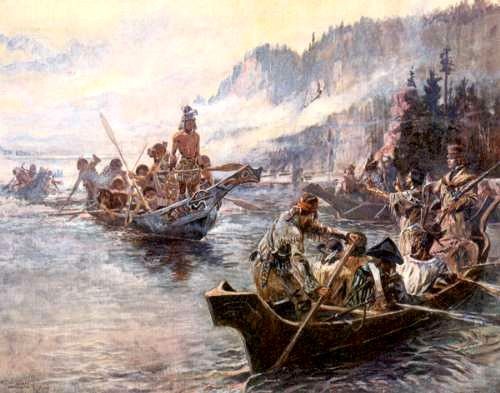 William Clark – Co-Leader of the Corps of Discovery Expedition