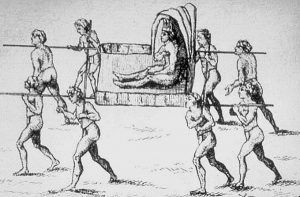 The Natchez Chief was known as the “Great Sun.”

The Natchez are a Native American people who originally lived in the Natchez Bluffs area, near Natchez, Mississippi. The name, belonging to a single town, was extended to the tribe and an entire group of towns, including peoples of different blood who had been conquered by the Natchez or had taken refuge with them. The Tioux and Grigras were two unrelated nations under the protection of the Natchez.

On his trek up the Mississippi River in 1699, Pierre Le Moyne d’Iberville described eight tribal towns in addition to Natchez. It is probably safe to infer that the nine towns, including Natchez, represented the entire group.

Antoine-Simon Le Page du Pratz, another explorer in the area, alluded to a tradition that the Taensa and Chitimacha were formerly united with the Natchez but left them. However, the latter had consistently recognized them as brothers. The Taensa were probably an offshoot of the Natchez, but the Chitimacha were of a distinct linguistic family. 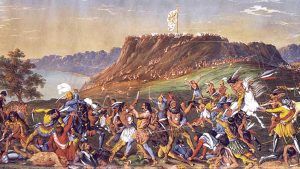 The Natchez attack the French

It is difficult to form an estimate of the numerical strength of this tribe, as the figures are given vary widely. It is probable that in 1682 when first visited by the French, they numbered about 6,000 and were able to put from 1,000 to 1,200 warriors in the field. The Natchez engaged in three wars with the French in 1716, 1722, and 1729. The last, which proved fatal to their nation, was caused by the attempt of the French governor, Chopart, to occupy the site of their principal village as a plantation, and it opened with a general massacre of the French at Fort Rosalie, established in 1716. The French, in retaliation, attacked the Natchez villages with a strong force of Choctaw allies, and in 1730, the Natchez abandoned their villages.

A small section remained not far from their former home, and a second group fled to Sicily island, near the Washita River, where they were attacked early in 1731 by the French. Many of them were killed, and about 450 were captured and sold into slavery in Santo Domingo. The Chickasaw received the third and most numerous division and built a village near them in north Mississippi called Nanne Hamgeh. In 1735 these refugees numbered 180 warriors or a total of about 700. 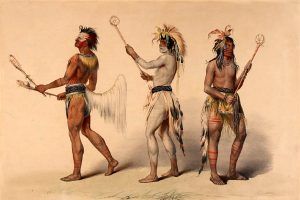 That same year, another group of Natchez refugees settled in South Carolina with the permission of the colonial government. However, some years later, they moved up to the Cherokee country, where they still kept their distinct town and language up to about the year 1800. However, the principal body of refugees had settled on Tallahassee Creek, an affluent of Coosa River. In 1799, their warriors were estimated to have been about 50. Having suffered severe losses, the remainder scattered far and wide among other tribes.

The Natchez and other tribes on the lower Mississippi River occupied a somewhat atypical position among the Indians. They seem to have been strictly sedentary people, depending for their livelihood chiefly upon agriculture. They developed considerable skill in the arts and wove a textile fabric from the inner bark of the mulberry, which they employed for clothing. They made excellent pottery and raised mounds of earth upon which to erect their dwellings and temples. They were also one of the eastern tribes that practiced head flattening.

Generally, the Natchez were peaceable, though, like other tribes, they were involved in frequent quarrels with their neighbors. All accounts agree in attributing to them an extreme form of sun worship and a highly developed ritual. Moreover, the position and function of the chief among them differed markedly from that among other tribes, as their head chief seems to have had absolute power over the property and lives of his subjects. On his death, his wives were expected to surrender their lives, and parents offered their children as sacrifices. The nation was divided into two classes — nobility and commoners.

It was a strongly matrilineal society with descent recognized along female lines, and the leadership passed from the chief, named “Great Sun,” to his sister’s son, which ensured the chiefdom stayed within one clan. They spoke a language with no known close relatives, although it may be very distantly related to the Muskogean languages of the Creek Confederacy. 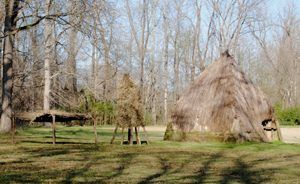 Grand Village of the Natchez, Mississippi

Today, most Natchez families and communities are found in Oklahoma, in two primary settlements within the southern halves of the Muscogee and Cherokee Nations. The state of South Carolina also recognizes two Natchez communities. Small Natchez communities and settlements can also be found in and throughout the Southeast. The nation developed a constitution in 2003, which confirms its long-held traditions of self-government. Approximately 6,000 Natchez are members of the nation. The last speaker of the language died in 1965.

Grand Village of the Natchez