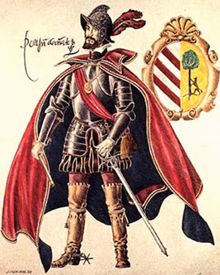 Born about 1550, probably in Zacatecas, Mexico, his parents were Spanish-Basque colonists and silver mine owners. His father, Cristobal de Onate, was a conquistador, colonial official, and silver baron who founded the city of Guadalajara, Mexico, in 1531. His mother was Dona Catalina Salazar y de la Cadena. Juan Onate grew up to marry Isabel de Tolosa Cortes de Moctezuma, the granddaughter of Hernan Cortes.

After the 1588 defeat of his Armada, Spain’s King Philip II was eager to re-establish his country’s prestige and hoping to repeat the exploits of Hernan Cortes and Francisco Pizarro, ordered the viceroy of New Spain to organize an expedition to seek and colonize a rich civilization thought to lie north of Mexico. Another objective was to spread Roman Catholicism and establish new missions.

In 1595, the viceroy selected Juan de Onate y Salazar to lead and finance the expedition. Despite Francisco Vasquez de Coronado’s failure to find the golden cities of Cibola half a century earlier, Onate believed that he would find Gran Quivira. Onate began the expedition in January 1598 with 400 settlers, soldiers, and livestock. The expedition crossed the Rio Grande at present-day El Paso, Texas, and on April 30, 1598, he claimed all of New Mexico for Spain. That summer, his party continued up the Rio Grande to present-day northern New Mexico, where he encamped near the Tewa pueblo of San Juan and was helped by the local Indians. Onate’s group built San Gabriel, New Mexico’s first capital, and became the province’s first governor. He also sent exploring parties westward to the vicinity of present-day Flagstaff, Arizona, and eastward to the vicinity of present-day Amarillo, Texas. After they realized the area was not rich in silver, many settlers wanted to return to Mexico, but Onate would not let them go and executed many of them. He was also incredibly brutal to the local Indians, killing, enslaving, and mutilating hundreds of men, women, and children.

In 1601, Onate himself led an exploration to find Quivira. In June, his party followed the Canadian River eastward across the Texas Panhandle, entering Oklahoma, then northeast toward the Wichita Indian villages at the junction of the Arkansas and Little Arkansas Rivers near present Wichita, Kansas. Like Coronado, he found only mud huts and hostile American Indians, and his disappointed troupe returned to New Mexico. While he was gone, most of his settlers returned to Mexico City. 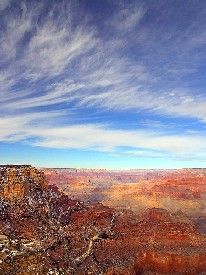 Still determined, Onate made his most ambitious expedition in 1605, following the Colorado River near the Grand Canyon to the Gulf of California. He found the colony in disarray when he returned to New Mexico in 1606. Later in 1606, due to continuing problems in the colony and mounting debt, Spain removed him from office and replaced him with Don Pedro de Peralta.

In 1609 he witnessed the founding of Santa Fe. In 1613, he traveled to Mexico City to defend himself against long-standing charges of mismanagement. He found himself charged with cruelty, immorality, mismanagement, dereliction of duties, and false reporting. He was fined and banished from New Mexico for life and Mexico City for four years. A short time later, he returned to Spain to clear his name, and upon appeal, he was cleared of the charges.