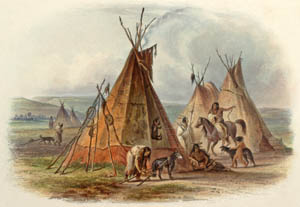 The Assiniboine are a tribe with similar characteristics to the Nakota Sioux. The differences in dialect between the two suggest a time of separation sometime before 1640. Their name comes from the Anishinaabe word that translates to “cooks by the use of stones.” The Assiniboine call themselves “Nakoda.”

In 1658, they were living at Lake Alimibeg, between Lake Superior and Hudson Bay. At an earlier time, they were probably at the headwaters of the Mississippi River and drifted north from the constant warfare with the Dakota. One of the first Europeans to describe the Assiniboine was an employee of the Hudson’s Bay Company named Henry Kelsey in the 1690s.

The Assiniboine became important trading partners with Hudson’s Bay Company and the North West Company. The Assiniboine and Sioux were both gradually pushed westward onto the plains from the woodlands of Minnesota by the Ojibway, who had acquired firearms from their French allies.

In the late 18th century and early 19th century, the Assiniboine traded with the American Fur Company and the competing Rocky Mountain Fur Company in Montana and the Dakota Territories. Through trade, the Assiniboine obtained guns, ammunition, metal tomahawks, metal pots, wool blankets, wool coats, wool leggings, and glass beads. They also acquired horses via raiding and trading with neighboring tribes of Plains Indians such as the Crow and the Sioux on their south. The tribe eventually became a large and powerful tribe with a horse and warrior culture. They also used horses to hunt the vast numbers of bison that lived within and outside their territory. At the height of their power, the Assiniboine dominated territory ranging from the North Saskatchewan River in the north to the Missouri River in the south. 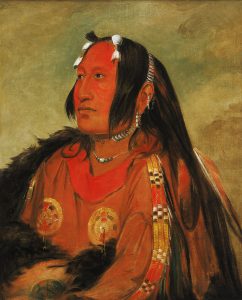 With increased contact with Europeans, Native Americans, including the Assiniboine suffered from infectious diseases. Smallpox was the worse among the Assiniboine population dropped to from 10,000 people in the late 18th century to only about 2600 by 1890.

The Assiniboine signed the Treaty of Fort Laramie in 1851, which eventually led to the establishment of several reservations.

Today, many Assiniboine people live jointly with other tribes, such as the Plains Cree, Saulteaux, Sioux, and Gros Ventre, in several reservations in Canada and the United States. Their total population is about 3,500.