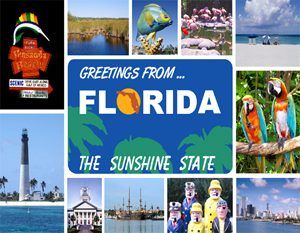 Situated on a peninsula between the Gulf of Mexico, the Atlantic Ocean, and the Straits of Florida, the Sunshine State has the longest coastline in the contiguous United States. Since the first European contact was made in 1513 by Spanish explorer Juan Ponce de Leon – who named it La Florida, meaning “Flowery Land,” Florida was a challenge for the European colonial powers before it gained statehood in the United States in 1845.

For visitors, Florida offers 663 miles of beaches, three National Parks, and numerous other National Seashores and National Monuments. It also provides over 50 state parks and well-known amusement parks, such as Walt Disney World and Busch Gardens.

Florida Flag – On a white field emblazoned with a red X and the state seal, Florida’s flag represents the land of sunshine, flowers, palm trees, rivers, and lakes. The seal features a brilliant sun, a cabbage palmetto tree, a steamboat sailing, and a Native American Seminole woman scattering flowers. 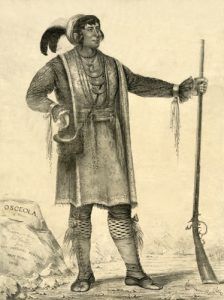 Ripley’s Believe It or Not! Odditorium

The Witchcraft – An Unsinkable Luxury Yacht 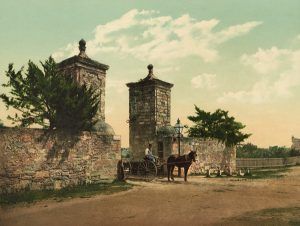