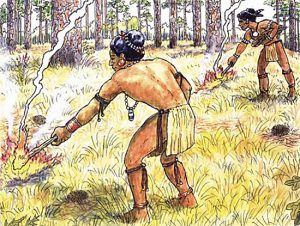 The Apalachee are a Native American people who historically lived in the Florida Panhandle. They spoke a Muscogean language called Apalachee, which is now extinct.

They inhabited the area in northwestern Florida between the Aucilla and Apalachicola Rivers above Apalachee Bay. Early on, they began to practice agriculture which allowed them to grow surplus crops, settle in larger groups, and increase their trading opportunities. The tribe grew numerous varieties of corn, pumpkins, and sunflowers. and also gathered wild strawberries, the roots and shoots of the greenbrier vine, lambsquarters, aquatic plants used to make flour, hickory nuts, acorns, saw palmetto berries, and persimmons. They caught fish and turtles in the lakes and rivers, and oysters and fish on the Gulf Coast, and hunted deer, black bears, rabbits, and ducks. The Apalachee made tools from stone, bone, and shell. They made pottery, wove cloth, and cured buckskin. They also specialized in making artisan goods.

They were encountered by Spanish explorers Pánfilo de Narváez in 1528 and Hernando de Soto in 1539, which the Spanish colonists began to call the Apalachee Province. When De Soto arrived, the tribe was living near present-day Tallahassee, Florida in villages of various sizes, or on individual small farmsteads. Small settlements generally had a few homes surrounded by an earthwork mound. Larger villages with 50-100 homes, called chiefdoms, were organized around large earthwork mounds that were built over decades for ceremonial, religious, and burial purposes. Their houses were covered with palm leaves or the bark of cypress or poplar trees. They stored food in pits in the ground lined with matting and smoked or dried food on racks over fires. When de Soto seized the Apalachee town of Anhaico in 1539, he found enough stored food to feed his 600 men and 220 horses for five months. The Apalachee were soon considered by Spanish explorers to have been the most advanced indigenous nation in Florida. 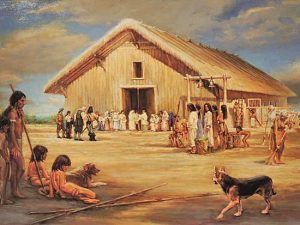 Traditionally, the tribe was divided into clans that traced descent through the maternal line, with chieftainship and offices held on hereditary lines. The Apalachee men wore deerskin loincloths while the women wore a skirt made of Spanish moss or other plant fibers. The men painted their bodies with red ochre and placed feathers in their hair when they prepared for battle. They also smoked tobacco in ceremonial rituals, including ones for healing. Apalachee warriors scalped opponents whom they killed and exhibited them as signs of their warrior ability. They also wore headdresses made of bird beaks and animal fur. They were missionized by Spanish Franciscans by about 1600.

Having a large population, estimated to have been from 6,000-8,000 people in the mid-1600s, they had an extensive trade network that reached as far north as the Great Lakes and westward to Oklahoma. 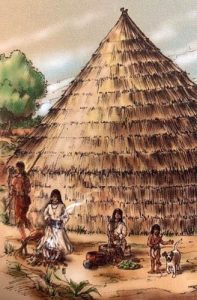 They occupied eight villages until early in the 18th century when Creek tribes to the north, incited by the British, began a series of raids on their settlements. These attacks culminated in 1703 when an army made up of a few hundred Englishmen and several thousand Creek warriors defeated the combined Spanish and Apalachee. The tribe was almost destroyed, and 1,400 Apalachee were removed to Carolina where some of them merged with the Creek. The remnants of the Florida tribe then sought the protection of the French in Mississippi and Louisiana.

Today, most of the Apalachee live in Louisiana. Its tribal office, located in Libuse, Louisiana, serves approximately 300 members.