Bahacecha – A tribe visited by Spanish explorer Don Juan de Oñate Salazar in 1604. At that time, the Bahacecha were living on the Colorado River in Arizona, between Bill Williams fork and the Gila. Their language was described as being almost the same as that of the Mohave, whose territory was to the north of them and with whom they were friendly. They lived in low wooden houses covered with earth. Though the Yuman tribes also inhabited that region, they are not identified with them.

Bankalachi –  A small Shoshonean tribe who lived on upper Deer Creek, which drains into Tulare Lake in Southern California With the Tubatulabal, they constitute one of the four principal coordinate branches of the Shoshonean family. 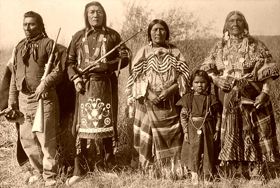 Bannock – The Bannock Indians are a Shoshonean tribe who long lived in the Great Basin in what is now southeastern Oregon and Southern Idaho. Today many of the Bannock still live on the 544,000 acre Fort Hall Indian Reservation in southeastern Idaho, along with the Lemhi and Northern Shoshone Indians.

Bayougoula – Their name meaning “bayou people, the Bayougoula were a Muscoogean tribe located on the west side of the Mississippi River in Iberville Parish, Louisiana. They spoke a Choctaw dialect. Living in thatched-roof houses, the tribe kept flocks of turkey and farmed corn, bean, squash, melons, sunflowers, and tobacco. In 1700 they were said to have numbered about 200-250. Not long after the Bayogoula almost exterminated the Mugulasha as the result of a dispute between the chiefs of the two tribes. In 1706, they received the Tonica into their village but were surprised and almost all massacred by their perfidious guests. Smallpox destroyed most of the remainder so that by 1721 not a family was known to exist.

Beothuk – The Beothuk or “Red Indians” were the original inhabitants of Newfoundland, Canada. The Beothuk loved the color red, hence the name. They covered their bodies, faces, hair, clothing and personal possessions with red paint made from a powdered ochre mixed with fish oil or animal grease. Through displacement, disease, and killings by the white man, the tribe died out in the 1800s.

Bidai – The Bidai were a tribe of Atakapa Indians from eastern Texas. The tribe name is Caddo for “brushwood,” probably referring to the peculiar growth characteristic of the region.

Big Swamp Indians – A name applied to the Seminole Indians, principally of the Mikasuki division, who lived near Miccosukee Lake in what is now Leon County, Florida.

Biloxi – A small Siouan speaking tribe, formerly living near the city in Mississippi that now bears their name. Their long lodges had walls made of mud and roofs of bark. After the defeat of the French in 1763, the Biloxi moved into Louisiana, some going as far west as Texas (near Biloxi Creek in Angelina County).

Blackfoot – Four tribes make up this powerful Plains Indian nation: the Blackfoot in Montana and the Siksika, Piikani, and Kainai in Canada. The Blackfoot was a nomadic group whose wanderings took them as far West as the Rocky Mountains and as far east as Manitoba, Canada. Following the buffalo herds, for which they depended upon for food and clothing, the Blackfoot lived in teepees. Most Blackfoot live in Montana and Alberta, Canada today.