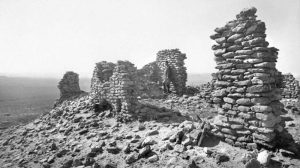 The Awatovi people were Puebloans who lived in a former pueblo of the Hopi on a mesa about nine miles southeast of Walpi in northeastern Arizona.

The pueblo was one of the original villages of the province of Tusayan of the early Spaniards and was visited by several Spanish explorers in the 1500s. By the 1600s, Spanish missionaries had brought new religion, regulations, and coercion and control tactics. It became the seat of the Franciscan mission of San Bernardino in 1629, under Father Francisco Porras. However, the Hopi response was mixed, and even as they blended new ways with old, some maintained the old traditions in secrecy and at great personal risk. In 1633, Father Porras was poisoned by the Hopi.

In addition to Catholicism, the Franciscans brought European tools, domesticated animals, new agriculture, and trade opportunities to their southwestern missions. At Awatovi, the fathers gave the Hopi iron knives, axes, mattocks, picks, crowbars, saws, chisels, and knowledge of Spanish wood and stone-working techniques. The Hopi also adopted animal husbandry and began raising sheep, which provided a new protein and wool source for making textiles. The Spanish also introduced new crops, including peaches and wheat, which the Hopi incorporated into their diet.

The Spanish continued to try to Christianize the Hopi at this and other pueblos until 1680 when the Pueblo Revolt began in August. At this time, the Awatovi people numbered about 800, and Father Figueroa was murdered during the revolt.

Henceforward no Spanish priests were established among the Hopi, although in 1700, Father Garaycoechea visited Awatovi, where he baptized 73 natives, but was unsuccessful in his attempt to reestablish missions among them. In November of the same year, owing to the friendly feeling which the Awatovi were said to have had for the Spanish friars, their kindred, especially of Walpi and Mashongnovi, joined in an attack on Awatovi at night, setting fire to the pueblo, killing many of its inhabitants, including all the men, and carrying off women and children to the other pueblos, chiefly to Mashongnovi, Walpi, and Oraibi. Awatovi was never inhabited again.