Adai – A tribe of the Caddo Confederacy, they were first encountered in 1529 by Cabeza de Vaca. See full Article HERE.

Adirondack – See Algonquin. The term “Adirondack” was a derogatory name that the Iroquois gave the Algonquin, which meant “they eat trees.”

Adena Culture – From the years of about 1000 B.C. to about 1 A.D. the Adena people were a group of well-organized societies that lived in parts of present-day Ohio, Indiana, Wisconsin, West Virginia, Kentucky, Pennsylvania, Maryland, and New York.

Adshusheer – A tribe associated with the Eno and Shakori in North Carolina in 1701. They were thought to have been located near present-day Durham, North Carolina. The Adshusheer were probably absorbed by one of the tribes with which they were associated.

Agawam (or Agawom) – A name of frequent occurrence in southern New England; Long Island, New York; and at least three villages or tribes in Massachusetts. The most important of these villages was located near present-day Ipswich, Massachusetts. However, the site was sold by the chief in 1638. This band was part of the Pennacook Confederacy and was almost extinct in 1658. However, as late as 1726 there were still three families living near Wigwam Hill. The second tribe or band of that name had its chief town on Long hill, near Springfield, Massachusetts. Springfield was sold in 1635 and the Indian town was in existence in 1675. This tribe was commonly classed with the Pacomtuc. The third was about Wareham, Massachusetts, the site of which was sold in 1655. It was probably subject to the Wampanoag but joined in the plot against the English in 1621. 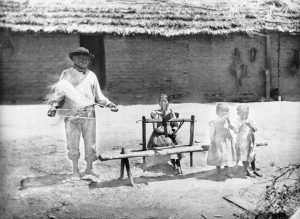 Agua Caliente – A small Cahuilla division, the tribe’s name means “warm water” in Spanish. They were located at the headwaters of the San Luis Rey River in southern California, forming one linguistic group with the Kawia, Luiseno, and Juaneno. Living in a number of villages in the Palm Springs area, they moved the Agua Caliente Indian Reservation in 1876 with the coming of the railroad. Later the Federal Government allotted that allocated the bulk of the Reservation land to the individual members of the tribe, however, the tribe maintains primary control over the use and development of all land on its reservation, including those parcels individually allocated. Today, much of Palm Springs and adjacent Cathedral City, Rancho Mirage and unincorporated Riverside County is built on these lands, which was leased to developers. The activities of the Agua Caliente Band of Cahuilla Indians have multiple economic impacts on the Coachella Valley, stemming not only from its casino operations but also the extensive remaining landholdings. Much of the tribe’s original Reservation of 31,500 acres has been highly developed into a modern desert tourism center, plus extensive upscale retail and residential uses.

Akonapi – A people mentioned in the ancient Walam Olum record of the Delaware, with whom they fought during their migrations. They have been identified with the Akowini of the same tradition, thinks it probable that they lived immediately north of the Ohio River in Ohio or Indiana. He regards Akowini as “correspondent” with Sinako, and Towakon with Towako; the latter he identities with the Ottawa, called by the Delaware Taway. If this identification is correct, it is likely that the Akonapi were the Sinago branch of the Ottawa.

Ais/Ays  – A tribe who once inhabited the Atlantic Coast of Florida, the primarily lived in villages of what is now called the Indian River. Little is known of their language or origins. They were noted by Jonathan Dickinson, whose party had been shipwrecked in 1696. By this time, they had had considerable contact with Europeans and regarded the Spanish as friends, but all others as enemies. They did not survive much longer as, after 1700, settlers in Carolina started raiding the Ais to capture slaves. By 1743, when the Spanish established a mission among them, the Ais numbers had declined dramatically by slave raids and disease. They were gone from the area by 1760.

Alabama/Alibamu – A Muskogean tribe of the southern United States, the tribe lived primarily within the state that now bears their name. They, along with other Muskogean speaking tribes, the Creek, Hitchiti, and Coushatta, formed the Creek Confederacy. The Alabama and their closely allied Coushatta migrated from Alabama and Mississippi to Texas in the late 18th century and early 19th century, under pressure from white settlers. They essentially merged and shared reservation land. Although the tribe was terminated in the 1950s, it achieved federal recognition in 1987 as the Alabama-Coushatta Tribe of Texas. Today, Its 550 members have about 4,500 acres of reservation land.

Alchedoma – A former Yuman tribe which were found living in eight villages in 1604 by  Juan de Onate below the mouth of the Gila on the Colorado River. Later, they were living along the Colorado River in Arizona and California and were estimated to have numbered about 2,500 people. They were allegedly enemies with the Mohave tribe and were absorbed by the Maricopa Indians, whom they joined before fleeing from the Colorado River from the Mohave.