Nathan Bedford Forrest (1821-1877) – A wealthy plantation owner, Forrest distinguished himself in the Confederate Army during the Civil War. A cavalryman, he saw extensive service in the Western Theater and became one of the most feared Confederate officers in the region. He was a master of mobile warfare and is often remembered for his fast attacks and raids.

John Charles Fremont (1813-1890) – Was an explorer, military officer, and politician who led multiple surveying expeditions through the western territory of the United States.

Johnny Fry (1840-1863) – The first “official” westbound rider of the Pony Express and Union soldier, he was killed during the Civil War.

John Brown Gordon (1832-1904) – Serving in the Confederate Army of Northern Virginia, John B. Gordon fought in most of its campaign and became one of General Robert E. Lee’s most trusted leaders. At Appomattox, John B. Gordon led Confederate forces during the surrender proceedings.

Ulysses S. Grant (1822-1885) – An American General and the eighteenth President of the United States, he achieved international fame as the leading Union general in the Civil War, capturing Vicksburg in 1863 and Richmond in 1865. He accepted the surrender of his Confederate opponent Robert E. Lee at Appomattox Court House.

Nathanael Greene (1742-1786) – A major general of the Continental Army in the American Revolutionary War, Greene’s military reputation was second only to General George Washington’s.

John Williams Gunnison (1812-1853) – Gunnison was a military officer and explorer who surveyed and mapped many areas of the American West. He was killed by Paiute Indians in Utah.

Henry W. Halleck (1815-1872) – A loyal defender of the Union, Henry Halleck served first as a senior commander in the Western Theater before becoming the General-in-Chief of Union armies in July 1862.

Ambrose Powell Hill (1825-1965) – A noted Confederate corps commander, Hill rose through the ranks of the Army of Northern Virginia, seeing action at most of the army’s major battles. He was killed in April 1865 during the final battle for Petersburg, Virginia.

John Bell Hood (1831-1879) – Hood served the Confederacy in both the East and West, developing a reputation an aggressive leader. Wounded several times, Hood led the Army of Tennessee to its destruction in 1864.

Oliver Otis Howard (1830-1909) – A career U.S. Army officer who made peace with Chiricahua Apache leader Cochise and made efforts to distribute land to African Americans.

Samuel Houston (1793-1863) – Nineteenth Century statesman, politician, and soldier, Houston was a key figure in the Texas Revolution and acted as the first and third President of the Republic of Texas.

Thomas Jonathan “Stonewall” Jackson (1824-1863) – A Confederate general during the Civil War, Jackson was the most revered Confederate commander after General Robert E. Lee.

General Joseph E. Johnston – Fighting at First Bull Run, Joseph Johnston next led the Confederate army during the 1862 Peninsula Campaign until he was badly wounded at Seven Pines. Joseph Johnston later commanded the Department of the West and the Army of Tennessee.

Stephen Watts Kearny (1784-1948) – One of the foremost frontier officers of the U.S. Army, General Stephen Kearny is remembered for his significant contributions in the Mexican-American War, especially the conquest of California.

Simon Kenton (1755-1836) – A legendary frontiersman and soldier, Kenton saved Daniel Boone’s life, acted as a scout, participated in Indian Wars and the War of 1812. 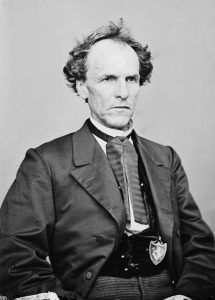 James Henry Lane, aka: “The Grim Chieftain,” Bloody Jim (1814-1866) – Principal leader of anti-slavery forces in Kansas during the Kansas-Missouri Border War and the Civil War.

Lane’s Brigade, aka: Kansas Brigade (1861) – Described as little more than a mob of thieves and adventurers, these troops went on a looting and burning rampage in western Missouri in the summer and fall of 1861, in the end entirely destroying the city of Osceola, Missouri.

Robert E. Lee (1807-1870) –  Lee was a career U.S. Army officer and the most celebrated general of the Confederate forces during the Civil War.

Meriwether Lewis (1774-1809) – Explorer, soldier, and public administrator, Lewis was best known for his role as the leader of the Corps of Discovery, whose mission was to explore the territory of the Louisiana Purchase.

William Henry Lewis (1829-1878) – Army officer who participated in both the Civil War and the Indian Wars. He was killed in the Battle of Punished Woman Fork, the last Indian battle in Kansas.

James Longstreet (1821–1904) – Known as Old Pete and Lee’s War Horse, Confederate General Longstreet became one of the Civil War’s most controversial figures. Hard-hitting in the attack, he nevertheless sensed the power of the tactical defense in an age of rifled weapons and field fortifications and preferred to fight from the defensive. His performance at Gettysburg, Pennsylvania drew fire from postwar critics who believed that, when General Robert E. Lee rejected his repeated advice to outflank the strong Federal position, Longstreet sulked and thereby cost the South the battle. Yet Lee never uttered direct criticism of Longstreet, who stood by him to the end at Appomattox, Virginia. He was one of the most valued and trusted lieutenants to General Lee.