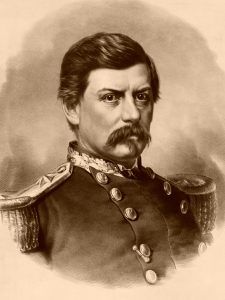 George Brinton McClellan was a career soldier and officer who fought in the Mexican-American War and the Civil War before turning to politics.

McClellan was born in Philadelphia, Pennsylvania, on December 3, 1826, to Dr. George McClellan, a prominent surgical ophthalmologist and founder of the Jefferson Medical College, and Elizabeth Steinmetz Brinton McClellan, daughter of a leading Pennsylvania family. The third of five children, he first attended the University of Pennsylvania at the age of 13, planning on studying law. However, after two years, he decided he wanted to be in the military and was accepted to the United States Military Academy in 1842.

Graduating second in his class, he began his career as a brevet second lieutenant in the U.S. Army Corps of Engineers. While serving in the Mexican-American War, he was promoted to Captain and afterward served as an instructor at West Point and a surveyor of potential transcontinental railroad routes. In 1857, he resigned from his commission and became Chief Engineer of the Illinois Central Railroad, where he occasionally worked with a lawyer named Abraham Lincoln. When the Civil War began, he again found himself in the military, with President Lincoln approving him as a Major General in the regular army. He was outranked only by General-in-Chief Winfield Scott.

He organized the famous Army of the Potomac and served briefly as the General-in-Chief of the Union Army from November 1861-1862. However, he consistently overestimated his opposing forces, and his military operations were perceived as failures. After the Battle of Antietam, he was ordered to turn over his command to Ambrose E. Burnside and await further orders at his home in New Jersey. They never came. 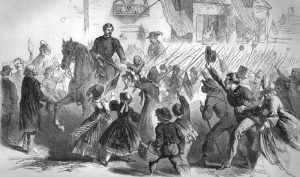 After his military service, he was an unsuccessful candidate for President of the United States in 1864. He was a Democratic Party politician who served as the 24th Governor of New Jersey from 1878-1881.

On October 29, 1885, George Brinton McClellan died in Orange, New Jersey. He is buried in Riverside Cemetery in Trenton.