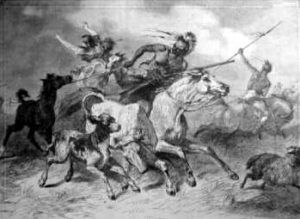 William Henry Lewis was an Army officer who participated in both the Civil War and the Indian Wars. He was killed in the Battle of Punished Woman Fork, the last Indian battle in Kansas.

Lewis was born in Alabama in 1829, and when he grew up, he attended and graduated from West Point. He then joined the 1st Infantry at Fort Brady, Michigan. In 1850, he transferred to the 5th Infantry and served at various posts in Texas. In 1856-57, he took part in the Seminole Wars in Florida before becoming part of the Utah Expedition against the Mormons. In 1860 and 1861, he was engaged in the Navajo Wars before the Civil War began. During this time, he was stationed at Forts Marcy and Union in New Mexico and took part in the Battle of Apache Canyon.

After the war, he became a major and commanded Fort Douglas in Utah Territory. In 1869-70, he was stationed at Fort Fred Steele in Wyoming. Afterward, he was assigned to the Plains posts of Camp Supply, Idaho, and Fort Dodge, Kansas.

Now a Lieutenant-Colonel, he and his troops pursued Dull Knife’s band of northern Cheyenne who had decided to leave their reservation in Oklahoma and return to their former home in the Black Hills of South Dakota. In what is referred to as the Cheyenne Raid, Lewis and his men caught up with the tribe in Scott County, Kansas. On the afternoon of September 27, 1878, Colonel Lewis and his troops advanced on the tribe, and in the Battle of Punished Woman Fork, Lewis was wounded in the thigh, and one warrior was killed. Lewis was placed in a military ambulance the following day, and the soldiers made their way to Fort Wallace, Kansas about 40 miles to the northwest. Along the way, he died of his wounds, becoming the last Kansas military casualty of the Indian Wars.