Without any ties to the South or to slavery, he chose the Confederacy apparently because in Missouri, this allowed him to attack all symbols of authority. He attracted to his gang some of the most psychopathic killers in American history.

Leader of the most savage fighting band in the Bleeding Kansas/Missouri Border War, William Quantrill, will long be known as the most ruthless bushwhacker during these turbulent times.

Born on July 31, 1837, to Thomas Henry and Caroline Cornelia (Clarke) Quantrill, the boy displayed his cruel tendencies even as a child. Purportedly, this bad seed would shoot pigs through the ears just to hear them squeal, nail snakes to trees, and tie cats’ tails together for the pure joy of watching them claw each other to death.

He wasn’t to change much as he grew older. After teaching school briefly in Ohio and Illinois, he fled to Kansas in 1857 to escape a horse theft charge. His initial stay in Kansas was short-lived when he accompanied an army provision train to Utah in 1858. Along the trail to Utah, the man who had grown up in a Unionist family met numerous pro-slavery Southerners who deeply affected his beliefs. Once in Utah, he began to use the alias of Charles Hart, lived his life as a gambler, and was quickly associated with several murders and thefts at Fort Bridger, Wyoming, and elsewhere in the territory. Fleeing yet again, under a warrant for his arrest, he returned to Kansas.

In December 1860, he joined a group of Kansas Free-State men intent on freeing the slaves of a Missouri man named Morgan Walker. But Quantrill’s participation was only a ruse. As the Jayhawkers hid in the bush, Quantrill volunteered to “scout the area.” Soon, Quantrill, along with Walker, returned to ambush the four Kansas men, killing three of them.

When the Civil War broke out in April 1861, Quantrill joined the Confederate side with enthusiasm. He fought with Confederate forces at the Battle of Wilson’s Creek in Oakhills, Missouri, in August 1861. This battle marked the beginning of the Civil War in Missouri, where the state would become the scene of savage and fierce fighting, primarily from guerilla warfare.

By late in the year, Quantrill became unhappy with the Confederates’ reluctance to prosecute the Union troops aggressively. As a result, the young man took it upon himself to take a more antagonistic course with his own-guerilla warfare, becoming the leader of Quantrill’s Raiders. Starting with a small force of no more than a dozen men, the pro-slavery guerrilla band began to make independent attacks upon Union camps, patrols, and settlements.

His band of marauders quickly grew to more than one hundred in 1862, with both regular pro-slavery citizens and Confederate soldiers, until he became the most powerful leader of the many bands of Border Ruffians that pillaged the area. Several famous would-be outlaws joined his ruffian group, including Frank and Jesse James and the Younger Brothers. Justifying his actions for perceived wrongs done to them by Kansas Jayhawkers and the Federal Authorities, the band robbed Union mail, ambushed federal patrols, and attacked boats on the Missouri River throughout the year. Quantrill’s nature as an outlaw, murderer, and thief made him a prime candidate for the vicious attacks, where he took advantage of the pandemonium for his own use in profitable hit-and-run attacks on pro-Union sympathizers and Federal Troops alike.

On August 11, 1862, Colonel J.T. Hughes’s Confederate forces, including William Quantrill, attacked Independence, Missouri, at dawn. They drove through the town to the Union Army camp, capturing, killing, and scattering the Yankees. During the melee, Colonel Hughes was killed, but the Confederates took Independence which led to a Confederate dominance in the Kansas City area for a short time. Quantrill’s role in the capture of Independence led to his being commissioned as a captain in the Confederate Army.

On the evening of September 6, 1862, William Quantrill led his Confederate guerrillas, numbering from 125 to 150, in a raid against Olathe, Kansas. The raid resulted in a half dozen deaths and the destruction of most of the town. Quantrill captured the military outpost and tried forcing the men to swear an oath to the Confederacy. The oath was deemed invalid in November 1862 since the guerrillas were not considered legitimate enemy military units. Kansas militia continued to occupy the Olathe military post through the rest of the Civil War.

On October 17, 1862, Quantrill and his band moved to attack Shawnee, Kansas. As they neared their destination, they came upon a Federal supply train, where they captured 12 unarmed men. Later these 12 drivers and Union escorts would be found dead, all but one shot in the head. Quantrill and his band then attacked the town, killing two men and burning the settlement to the ground.

Shortly after that, Quantrill traveled to Richmond, Virginia, where he sought a regular command under the Confederacy Partisan Ranger Act. However, his reputation for brutality had preceded him, and his request was denied.

At about the same time, the Commander of the Department of Missouri, Major General Henry W. Halleck, ordered that guerrillas such as Quantrill and his men would be treated as robbers and murderers, not ordinary prisoners of war.

After this proclamation, Quantrill’s tactics became even more aggressive as he no longer adhered to the principles of accepting enemy surrender.

In May 1863, Quantrill and his band moved closer to the Missouri-Kansas border. Brigadier General Thomas Ewing, Jr. from Kansas, who commanded the district border, was unhappy with their presence. Soon, he issued General Order Number 11, which stated that any person – man, woman, or child, who was directly involved with aiding a band of guerrillas would be jailed.

The idea was, by taking away the Border Ruffians’ means of food and shelter, the guerillas would leave the area. Before long, women and children were rounded up and placed in a dilapidated three-story building in downtown Kansas City, Missouri. Of particular interest to the Federal Troops were the known relatives of the Border Ruffians, including family members of “Bloody Bill” Anderson and the Younger Brothers.

Though signs that the building housing the women and children was unstable, such as large cracks in the walls and ceilings, and large amounts of mortar dust on the floor, the signs were ignored. On August 13, 1863, the building collapsed, killing five women and injuring dozens of others. 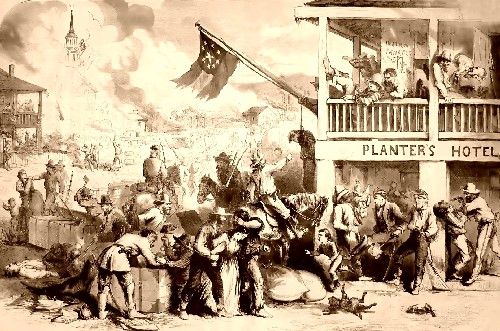 Among the killed and injured in the collapse were women who were close relatives of prominent Confederate guerrillas. Those killed in the collapse included Josephine Anderson, sister of “Bloody Bill Anderson,” Susan Crawford Vandever and Armenia Crawford Selvey, Cole Younger’s cousins, Charity McCorkle Kerr, wife to Quantrillian member Nathan Kerr, and a woman named Mrs. Wilson. Many others were injured and scarred. Caroline Younger, sister to Cole and James Younger, would die two years later due to her injuries. Another Anderson sister was crippled for life when both of her legs were broken in the incident.

When news of the collapse reached the families of the dead and injured, they went wild. Soon, crowds gathered around the ruins as the dead and wounded were carried off, shouting “Murder!” at the Union forces. Later, Quantrill and his men would claim that the building was deliberately weakened, giving them ammunition for the infamous attack on Lawrence that was about to come.

Early on the morning of August 21, 1863, Quantrill, along with his murderous force of about 400, descended on the still sleeping town of Lawrence, Kansas. Incensed by the free-state headquarters town, Quantrill set out on his revenge against the Jayhawker community.

In this carefully orchestrated early morning raid, he and his band, in four terrible hours, turned the town into a bloody and blazing inferno unparalleled in its brutality.

Quantrill and his bushwhacker mob of raiders began their reign of terror at 5:00 a.m., looting and burning as they went, bent on total destruction of the town, then less than 3,000 residents. They had killed approximately 180 men and boys by the time it was over and left Lawrence nothing more than smoldering ruins. 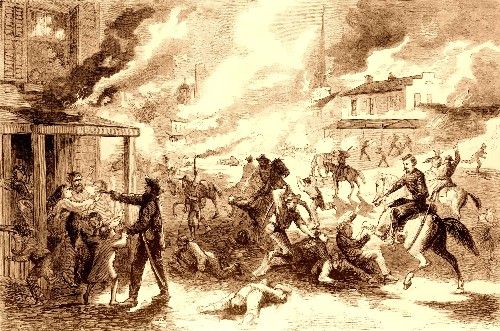 The Lawrence Massacre led to swift retribution, as Union troops forced the residents of four Missouri border counties onto the open prairie by issuing General Order #11 on August 25, 1863. The order required all persons living in Cass, Jackson, Bates, and part of Vernon counties to immediately evacuate their homes, leaving the area a virtual “No-Man’s Land.” The Federal Troops and Kansas Jayhawkers immediately burned and looted everything left behind.

Having been pushed back, Quantrill moved his men to Texas. On their way south, Quantrill’s well-mounted and armed force of 400 men came upon the 100-man headquarters escort of Union General James G. Blunt. Quantrill’s band attacked on October 6, 1863, killing more than eighty men in what later became known as the Barter Springs Massacre.

Upon his arrival in Texas, Quantrill reported at Bonham on October 26, 1863, to General  Henry E. McCulloch. Quantrill and his men were ordered to help round up the increasing number of deserters and conscription-dodgers in North Texas. The band captured a few but killed even more, after which McCulloch pulled them off this duty. The General then sent them to track down retreating Comanches from a recent raid on the northwest frontier, which they did without success.

Finally, General McCulloch, determined to rid North Texas of Quantrill’s influence, arrested him on March 28, 1864, on the charge of ordering the murder of a Confederate Major. However, Quantrill escaped returning to his camp near Sherman, Texas, pursued by over 300 state and Confederate troops. His band then crossed the Red River into Indian Territory (Oklahoma), where they re-supplied from Confederate stores and started the long journey back to Missouri.

Soon, his guerrilla band began to break up into several smaller units, and his vicious lieutenant, “Bloody Bill” Anderson, known for wearing a necklace of Yankee scalps into battle, would continue to terrorize the state of Missouri. As Quantrill’s authority over his followers disintegrated, they elected George Todd, a former lieutenant to Quantrill, to lead them.

Anderson’s greatest fame came from a massacre and battle with Union soldiers at Centralia, Missouri, when on September 27, 1864, he led a band of about 70 men into the town. Some dressed in Union uniforms; the ruffians showed no mercy to the Centralia residents as they systematically raided homes and stores. Barricading a train approaching Centralia, Anderson’s men found 23 unarmed Union soldiers on leave. The soldiers were taken from the train and ordered to disrobe. After isolating one soldier, Sergeant Tom Goodman, 22 soldiers were shot and killed as the horrified Centralia residents and train passengers looked on.

Sergeant Goodman, who was taken hostage by the Anderson guerrillas, lived to write of the whole affair after the Civil War.

In their final act of wanton destruction, the guerrillas set fire to the Centralia Depot, sacked and set fire to the train, and then sent it on its way, west, with no crew aboard, to later crash and be destroyed. Anderson would be killed in battle near Orrick, Missouri, a month later.

Meanwhile, in an attempt to regain his prestige, Quantrill concocted a plan to lead a company of men to Washington and assassinate President Abraham Lincoln. He assembled a group of raiders in Lafayette County, Missouri, in November and December 1864 with the idea of completing this task. However, the strength of Union troops east of the Mississippi River convinced him that his plan could not succeed. Quantrill turned back and resumed his usual pattern of raiding.

With a group of 33 men, he entered Kentucky early in 1865. In May, a Unionist irregular force surprised his group near Taylorsville, Kentucky, and in the ensuing battle, William Quantrill was shot through the spine. He died at the military prison at Louisville, Kentucky, on June 6, 1865. He is buried at the Missouri Confederate Soldier’s Memorial in Higginsville, Missouri.

William Quantrill – The Man, the Myth, the Soldier by Paul R. Petersen (a different take)