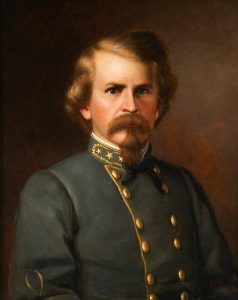 Earl Van Dorn was a West Point graduate and career U.S. Army officer who fought with distinction in the Mexican-American War but resigned his commission in 1861 to join his native state of Mississippi in the Confederate cause. He would make the ultimate sacrifice for his beliefs.

Earl was born in Claiborne County, Mississippi, on September 17, 1820, to Peter Aaron Van Dorn, a lawyer, and judge, and  Sophia Donelson Caffery, a niece of Andrew Jackson.

When he grew up, his family relations with Andrew Jackson secured him an appointment at the United States Military Academy at West Point, and he enrolled in 1838. In July 1842, he was appointed a brevet second lieutenant in the 7th U.S. Infantry Regiment and began his army service in the Southern United States.

In December 1843, Van Dorn married Caroline Godbold, and the couple would eventually have two children. After fighting in the Mexican-American War, he saw action in Indian Wars with the Seminole in Florida and the Comanche in Texas. However, when the Civil War erupted, he resigned from his commission in 1861 to join the Confederacy. After serving briefly as commander of the Mississippi Militia, Van Dorn received a commission in the regular Confederate army as a colonel of infantry in March 1861.

In January 1862, Van Dorn, now a major general, was given command of the newly-formed Trans-Mississippi Military District. Van Dorn immediately faced a Union invasion of Arkansas. He took charge of his two Confederate armies. He devised a complex flanking maneuver to defeat the smaller Union force, advance north through Missouri, capture St. Louis, and threaten Ulysses S. Grant’s armies. Despite his numerical advantage, Van Dorn’s two-pronged attack on entrenched Federal positions at Pea Ridge, Arkansas, failed due to delays, lack of supplies, and the loss of his top two army commanders. The Union forces counterattacked and drove Van Dorn’s armies from the field.

Van Dorn suffered a similar fate at the Second Battle of Corinth, Mississippi. Again failing to inspect the defensive position of his opponent correctly, Van Dorn’s attack on General Rosecran’s Federal troops fell short and was eventually repulsed, forcing the Confederates to retreat. Following the battle, Van Dorn was relieved of his army command and reassigned to command General John C. Pemberton’s cavalry. As a cavalry commander, Van Dorn would succeed tremendously in a raid on Grant’s supply depot at Holly Springs, Mississippi, on December 20, 1862. Van Dorn’s raid thwarted Grant’s initial plan to attack Vicksburg and cut the Confederacy in half. On May 7, 1863, Van Dorn was shot dead at his headquarters by a husband jealous of the attentions Van Dorn paid his wife. He was buried at the Wintergreen Cemetery in Port Gibson, Mississippi. 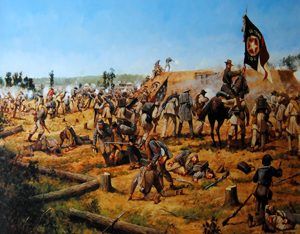 The struggle over Corinth and its railroad crossroads would go on for six months.