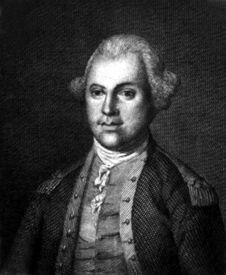 Nathanael Greene was a major general of the Continental Army in the American Revolutionary War; Greene was the son of a Quaker farmer, also named Nathanael and Mary Mott. One of nine children, he was born at Warwick, Rhode Island, on August 7, 1742.

Though his father’s sect, called the Society of Friends, discouraged “literary accomplishments,” Greene educated himself with a special study of mathematics and law. The Reverend Ezra Stiles, later president of Yale University, strongly influenced the young Nathanael’s life.

In 1770, he moved to Coventry, Rhode Island, to take charge of the family-owned foundry. There, he was the first to urge the establishment of a public school and was chosen as a Rhode Island General Assembly member. On July 20, 1774, he married Catharine Littlefield on July 20, 1774.

Even though the Society of Friends believed that wars and fighting were wrong, Greene helped organize a militia in October 1774 because the possibility of war with Britain was increasing.

As a result, he was no longer allowed to be a member. Because he had a limp, the militia group didn’t want him to be an officer. So, he began his military career as a private.

When the American Revolution began, Rhode Island created an army for its defense. Nathanael Greene was appointed Brigadier General to command this army. Greene fought in the Battles of Fort Washington, Trenton, Brandywine, Germantown, and many others, gaining the trust of General George Washington. In March 1778, he was appointed Quartermaster General of the Continental Army because he was good at gathering and conserving military supplies. As quartermaster, his responsibilities included getting supplies to the far-flung army and organizing the army’s camps. When he accepted the position, he reserved the right to continue as a commanding general in the field.

During the winter of 1779-1780, when the army was encamped at Morristown, New Jersey, Greene’s efforts greatly benefited the Continentals. His wife Catharine gave birth to their fourth child in Morristown in late January.

In October 1780, following the disastrous patriot defeat at Camden, South Carolina, Washington gave Greene command of forces in the South. In a brilliant campaign, Greene reversed the new nation’s fortunes, and in a series of battles and marches, he wore down the British army and paved the way for the surrender of Cornwallis at Yorktown. He emerged from the war with a military reputation second only to General George Washington’s.

After the war, Greene was deeply in debt because he had pledged his own money to feed the troops. But, South Carolina voted to give him a gift of money in gratitude for his defense of the state. Additionally, the state of Georgia gave him a plantation on Cumberland Island, where he moved in 1785. A year later, Greene died on June 19, 1786, from an illness brought on by sunstroke at the age of forty-four. He is buried within the boundaries of Cumberland Island National Seashore. 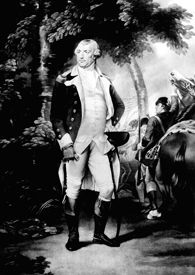 Greene was the only general, other than George Washington and Henry Knox, to serve the entire eight years of the war.

It had been happy for me if I could have lived a private life in peace and plenty, enjoying all the happiness that results from a well-tempered society founded on mutual esteem. But, the injury done my country, and the chains of slavery forging for all posterity calls me forth to defend our common rights, and repel the bold invaders of the sons of freedom.