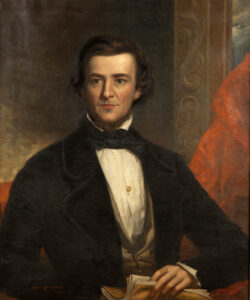 David Dawson Mitchell was a fur trader, soldier, and superintendent of Indian Affairs.

Mitchell was born in Louisa County, Virginia, on July 31, 1806, to Charles and Mary Garth Mitchell. Later the family moved to Kentucky.

In 1828, he became a clerk for the American Fur Company in St. Louis, Missouri. He was first assigned to the “Ioway Outfit,” chiefly handled through Prairie du Chien, Wisconsin. In 1830, he was transferred to the “Upper Missouri Outfit, ” with which he remained during his fur-trading career.

In 1832, he helped to build Fort Mackenzie in present-day Montana. He became a leader of trappers and hunters. He accompanied Prince Maximilian and Karl Bodmer on their trip up the Missouri River from Fort Union, North Dakota, to Fort McKenzie in 1833. Another fur trading post, Fort Mitchell, Nebraska, located at the mouth of the Niobrara River, was named after him in 1833. In 1835, he became a partner in the Upper Missouri Outfit.

In 1840, Mitchell married Martha Eliza Berry, the daughter of Major Taylor Berry. The couple would eventually have four children. He then settled down in St. Louis, Missouri.

He was appointed as superintendent of Indian Affairs, central division, in September 1841 and held this office for much of the period until 1853. 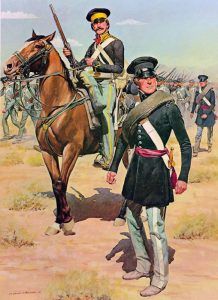 U.S. Soldiers in the Mexican-American War

In 1846, at the beginning of the Mexican-American War, he entered the volunteer service of the 2nd Missouri Regiment, organized and commanded by Sterling Price. He served under Colonel Alexander Doniphan during his expedition to New Mexico, then Chihuahua, through Texas, and New Orleans, Louisiana. At one point, when troops lacked supplies and funds, Mitchell gallantly escorted Senora La Tules, the gambling queen of Santa Fe, to a fandango and so flattered her with his attention that she lent him cash to move the troops.

He was commended for bravery in the Battles of Brazito and Sacramento. For his service, he was promoted to Lieutenant Colonel. Mitchell remained in the army for several years after the war and was again made superintendent of Indian Affairs in 1851.

Mitchell sought to ensure safe passage for westward pioneers and negotiated in the Treaty of Fort Laramie in 1851. He also wanted to ensure that Native Americans received a fair settlement for the travelers crossing through their traditional hunting lands, significantly reducing buffalo and other game populations.

“Humanity calls loudly for some interposition on the part of the American government to save, if possible, some portion of these ill-fated tribes, and this, it is thought, can only be done by furnishing them with the means, and gradually turning their attention to agricultural pursuits. Without some aid from the government, it will be impossible for them to make an attempt even as graziers.”

Early in 1855, he promoted Missouri and California Overland Mail and Transportation Company, for which he served as president for several years. 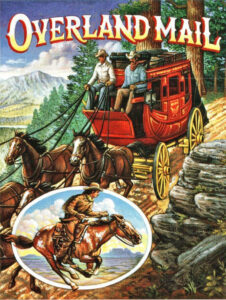 In 1858, he supplied mules for the army in the Mormon War of 1858 and escorted survivors of the Mountain Meadow Massacre back to Arkansas in 1859.

Mitchell died of typhoid fever on May 23, 1861, at the Planter’s House in St. Louis, Missouri. He was buried at Calvary Cemetery in the city. Unfortunately, his tombstone was demolished in 1951, as were many tombstones.