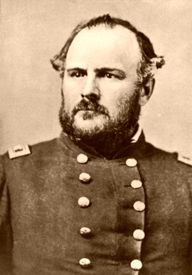 John Milton Chivington (1821-1894) – A hero in the Battle of Glorieta Pass in New Mexico, and the infamous Commander of the U.S. Army troops at the Sand Creek Massacre in Colorado, John Chivington was born in Lebanon, Ohio on January 27, 1821. When he grew up he became a Methodist minister and was appointed to the Payson Circuit in the Illinois Conference, where he served for ten years.

In 1853, he worked in a missionary expedition to the Wyandot people in Kansas. Here, his outspoken views in favor of abolition placed him in danger, and he was soon persuaded to leave Kansas for the Nebraska Territory. He then served as a pastor in Omaha, Nebraska. After serving for six years, he moved his family to the Colorado Territory and settled in Denver. Two years later, the U.S. Army commissioned him as a major with the 1st Colorado Infantry during the 1862 New Mexico Campaign of the Civil War. He played a key role in helping capture Confederate supplies near Johnson’s Ranch during the Battle of Glorieta Pass. This strategic move made him a celebrated hero and enabled him to become Colonel later that year, commanding the Colorado Military District.

With stories of Indian threats sweeping Colorado Territory in 1864, Colonel Chivington left Denver in November to join his troops near Booneville. On the 28th his command arrived at Fort Lyon. Later that night, he and his troops departed from the fort, heading north toward the Cheyenne and Arapaho camps at Sand Creek, despite the fact that two tribes had expressed a desire for peace in a meeting with Chivington and Territorial Governor John Evans just weeks before.

On the morning of November 29th, Chivington led a 700-man force of Colorado Territory militia to attack and destroy the peaceful encampment. The troops along with four howitzers surrounded the Indians. The ever trusting Chief Black Kettle raised both an American and a white flag of peace over his tepee. However, Chivington ignored the symbol of peace and surrender, raising his arm for the attack. An easy victory at hand, cannons, and rifles began to pound upon the camp as the Indians scattered in panic. The frenzied soldiers began to charge, hunting down men, women, and children, shooting them unmercifully. A few warriors managed to fight back allowing some members of the camp to escape across the stream.

When the attack was over, as many as 150 Indians lay dead, most of which were old men, women, and children. In the meantime, the cavalry lost only 9 or ten men, with about three dozen wounded. Black Kettle and his wife followed the others up the stream bed, his wife being shot in the back and left for dead. 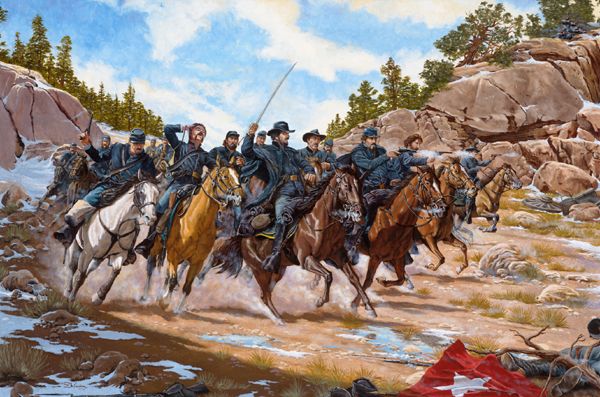 The atrocity resulted in an investigation by the Joint Committee on the Conduct of War, and across the country most saw the massacre as a revolting butchery of mostly women and children. Regarding the massacre, Congress’ Joint Committee on the Conduct of War penned, “As to Colonel Chivington, your committee can hardly find fitting terms to describe his conduct. Wearing the uniform of the United States, which should be the emblem of justice and humanity; holding the important position of commander of a military district, and therefore having the honor of the government to that extent in his keeping, he deliberately planned and executed a foul and dastardly massacre which would have disgraced the veriest savage among those who were the victims of his cruelty. Having full knowledge of their friendly character, having himself been instrumental to some extent in placing them in their position of fancied security, he took advantage of their apprehension and defenseless condition to gratify the worst passions that ever cursed the heart of man. It is thought by some that desire for political preferment prompted him to this cowardly act; that he supposed that by pandering to the inflamed passions of an excited population he could recommend himself to their regard and consideration.”

In the end, no charges were brought against Chivington or other participants; however, Chivington’s reputation and political aspirations were shattered.

With his term of service expiring, Chivington left Colorado for the Midwest but later returned to Denver where he lived and worked until his death of cancer on October 4, 1894.

To the end of his life, Chivington maintained that Sand Creek had been a successful operation, arguing that his expedition was in response to Cheyenne and Arapaho raids and torture inflicted on wagon trains and white settlements in Colorado. 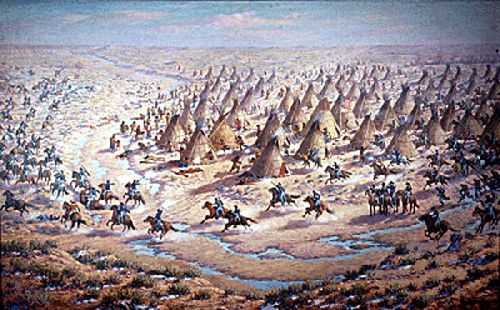