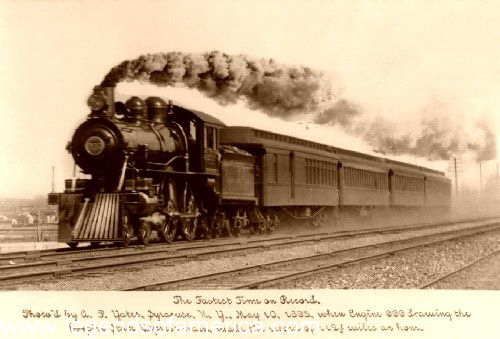 In 1862 a charter was granted by the United States Government for the construction of a railroad from Omaha, Nebraska to the Pacific coast. At that time, the only states west of the Mississippi Valley, in which any railroad construction of importance existed, were Iowa and Missouri.

During the three decades which had passed since the first railroad construction, the earlier methods of transportation by boat, canal, and stage coach gave place in the Eastern half of the United States to more modern methods of transportation. As a result of these new conditions, the states, cities, and towns were welded together, and population and prosperity increased rapidly in those inland sections which had formerly languished because they had no means of easy and rapid communication.

The construction of extensive railways; however, and particularly the consolidation of small, experimental lines into large systems, dates from the days of the discovery of gold in California. The nation did not begin to realize the extraordinary possibilities of the vast Western territory until its attention was thus suddenly and definitely concentrated on the Pacific by the annual addition of over fifty million dollars to the circulating medium.

The wealth drawn so copiously from this Western part of our continent had a stimulating effect on the commerce, manufactures, and trade of the entire Eastern section. People began to understand that with the acquisition of California, the nation had obtained practically half a continent, of which the future possibilities were almost unlimited, so far as the development of natural resources and the general production of wealth were concerned.

The public conviction that a railroad linking the West and the East was an absolute necessity became so pronounced after the gold discoveries of ’49 that Congress passed an act in 1853 providing for a survey of several lines from the Mississippi River to the Pacific. Though the published reports of these surveys threw a flood of light on the interior of the continent, they led to no definite result at the time because the rivalry of sections and groups of interests for the selection of this or that route held up all progress. 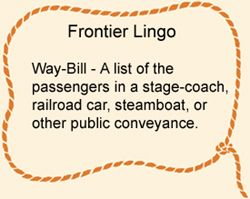 The Act of 1862, which created the Union Pacific Railroad Company, together with the amending Act of 1864, authorized the construction of a main line from an initial point “on the one hundredth meridian of longitude,” in the Territory of Nebraska to the eastern boundary of California, with branch lines to be constructed by other companies and to radiate from this initial point to Sioux City, to Omaha, to St. Joseph, to Leavenworth, and to Kansas City.* Provision was made for a subsidy of $16,000 a mile for the level country east of the Rocky Mountains; $48,000 a mile for the lines through mountain ranges; and $32,000 a mile for the section between the ranges. The original plan to secure the government subsidies by a first mortgage on the lines was amended so as to allow private capital to take the first mortgage, the Government taking a second lien for its advances. In addition to these subsidies the several companies were to receive land grants of 12,800 acres to the mile in alternate sections contiguous to their lines. Upon the same terms, the Central Pacific Railroad, a company incorporated under the laws of California, was authorized to construct a line from the Pacific coast, at or near San Francisco, to meet the Union Pacific Railroad..

* These ambitious designs were never fully realized. The main line ran eventually west from Omaha, meeting the Sioux City branch at Fremont. The only other branch which was constructed to connect with the Union Pacific was that from Kansas City and it ran first to Denver.

The public was quick to realize the significance of this huge enterprise, for the news papers of the day were full of such comments as the following:

“It is useless to enlarge upon the value and importance of this great work. It concerns, not the United States alone, but all mankind. Its line is coincident with the natural and convenient route of commerce for the world…. Over it the trip will be made from London to Hong Kong in forty days, over a route possessing every comfort and attraction, which takes a continent in its course, and which, from the variety and magnitude of its sources, from the race which now dominates it, and from the extent of their numbers, wealth and productions, must soon give law to the commercial world.” 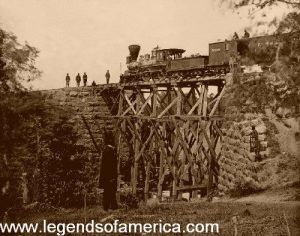 The engine “Firefly” on a trestle of the Orange and Alexandria Railroad.

Although the construction had been liberally subsidized by the Government, gross extravagance had promptly crept in; juggling of accounts for the purpose of securing profits on the government advances was freely indulged in, and after only a small section of the line had been completed it was announced that more capital must be forthcoming or the work would cease.

Notwithstanding these and similarly optimistic sentiments, the meager financial support given to the enterprise by the public at  Out of this situation grew the plan for subletting the work to a construction company known as the Pennsylvania Fiscal Agency–a name which was afterwards changed to that of the Credit Mobilier of America. The story of the Credit Mobilier, with its irregularities involving conspicuous politicians, is one of the most disgraceful in American history. The detailed history of these operations need not be considered here; it is sufficient to say that finally, in spite of political scandals, the Union Pacific lines were brought to completion. Within two years after the letting of the contracts to this new company, in 1866, over five hundred miles of road were completed and in operation. An advertisement published late in 1868 announced that “five hundred and forty miles of the Union Pacific Railroad, running west from Omaha across the continent, are now completed, the track being laid and trains running within ten miles of the Rocky Mountains…. The prospect that the whole grand line to the Pacific will be completed by 1870 was never better.”