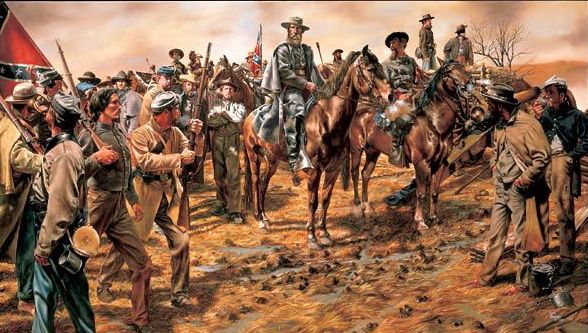 Army of the Tennessee

The Army of the Tennessee was a Union army group in the Western Theater of the Civil War; it was named for the Tennessee River. When it was first organized in October 1862, it contained but one corps, the XIII, which held 11 divisions and a cavalry command. It was soon reorganized into four corps, with each having two or three divisions and detachments of artillery and cavalry. Its first commander was General Ulysses S. Grant, who was severely tested in April 1862 when he and his troops obtained victory in the bloody Battle of Shiloh. Later that month, he sent the Union armies to prosecute the relatively bloodless Siege of Corinth and then strained to hold Union positions in Tennessee and Mississippi. 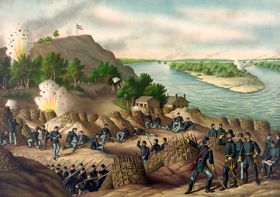 Six months later, in October 1862, Grant’s command was reconfigured and elevated to departmental status as the Department of the Tennessee. He commanded these forces until after his critically important victory at Vicksburg, Mississippi, in July 1863. The Army of the Tennessee was then commanded by General William Tecumseh Sherman. At the same time, the army marched and fought in the Chattanooga Campaign, through the Relief of Knoxville, and the Meridian Campaign. In March 1864, Sherman was placed in command of the western armies for the Atlanta campaign. Now under the leadership of General James B. McPherson, the army fought their way south from Chattanooga, Tennessee, to Atlanta, Georgia. McPherson was killed during the battles around Atlanta, and leadership was transferred to General Oliver O. Howard, who remained in command of the army for the rest of the war.