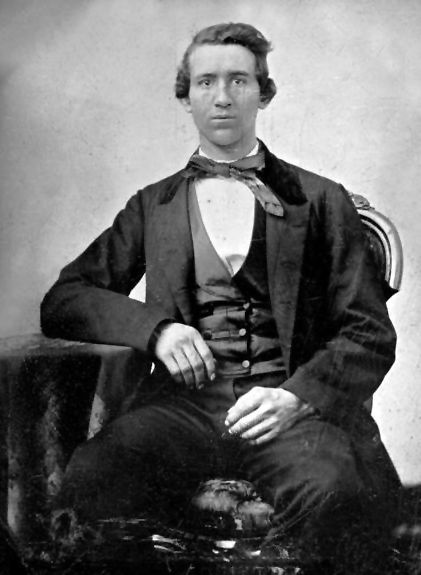 Johnny Fry was the first “official” westbound rider of the Pony Express and was a Union soldier killed during the Civil War.

Johnny Fry was born in Bourbon County, Kentucky, to John Fry and Mary Fry in 1840. Something happened to Fry’s father, as when he was 16, he moved with his mother and her new husband, Benjamin Wells, to Rushville, Missouri, around 1857.

As a young man, he had already become a skilled horseman. After he won a horse race near Rushville, Missouri, in 1860, he was approached by Alexander Major, who asked Fry if he would be interested in riding for his newly founded Pony Express service. Fry accepted the offer and was assigned to the first leg of the westbound route of the Pony Express, delivering it from the stables in St. Joseph, Missouri, to Seneca, Kansas, a distance of about 80 miles.

Weighing in at less than 120 pounds, Fry was to be the first west-bound Pony Express rider from St. Joseph, Missouri. The service was launched with much hoopla and excitement on April 3, 1860. Amidst the flowery speeches of the local postmaster, Fry’s saddle was loaded with 50 pieces of mail, “including a congratulatory message from President Buchanan to Governor Downey of California. Fry’s counterpart in the west, James Randall, had already left San Francisco. Fry left the stables in St. Joseph, carrying his mailbag the few blocks to a ferry across the Missouri River, across to Elwood, Kansas, and then on to Seneca, Kansas. 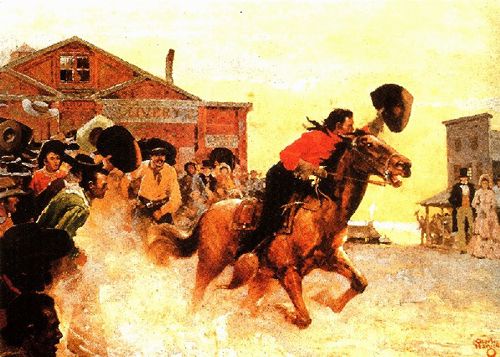 Fry quickly gained a reputation for never failing to deliver the mail, regardless of weather or danger, and was a fast rider, averaging 12.5 miles per hour, including all stops. Local lore says the donut was invented as a cake for Fry to eat while speeding by young girls’ homes near Troy, Kansas.

Afterward, he was recruited by Union Army General James G. Blunt to serve as a messenger rider and scout. On October 6, 1863, on his way from Fort Gibson, Oklahoma, to Fort Scott, Kansas, with an important message, he was attacked by Confederate guerrillas under the leadership of the famed William Quantrill. In a hand-to-hand fight with the Confederates, Fry killed five of his assailants before falling mortally wounded.