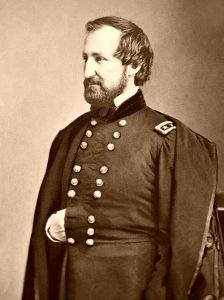 William S. “Old Rosy” Rosecrans was a Union officer in the Civil War, a businessman, and a politician.

William was born to Crandell and Jane Hopkins Rosecrans on September 6, 1819, at Delaware City, Ohio, and grew up to graduate from West Point in 1842. He went to Westpoint with several other men who would become famous military officers in the Civil War and was the roommate of James Longstreet and A.P. Stewart, who would become generals in the Confederate Army. He was assigned engineering duty after graduation, but in 1854, he resigned and became an architect and a civil engineer. He was very successful and soon took over a mining business in West Virginia, where his geological surveys were extremely accurate, pointing to profitable new veins of coal. In Cincinnati, Ohio, he, along with two partners, built one of the first oil refineries west of the Allegheny Mountains. He was also an inventor, obtaining patents for several products, including odorless oil, a round lamp wick, a short practical lamp chimney, and a new and economical manufacturing soap method. In 1859, he was burned severely when an experimental “safety” oil lamp exploded. Bedridden for 18 months, he recovered just as the Civil War broke out.

Rosecrans quickly offered his services to Ohio Governor William Dennison, where he became a drillmaster for the Marion Rifles, an engineering officer, and promoted to a colonel, commanding the 23rd Ohio Infantry Regiment, whose members included Rutherford B. Hayes and William McKinley, both future presidents. Rising quickly, he was promoted to brigadier general in the regular army on May 16, 1861.

He proved effective in the West Virginia Campaign with victories at Rich Mountain and Corrick’s Ford in July 1861 and soon assumed command of what was to become the Department of Western Virginia. He was transferred to the Western Theater in May 1862. Soon, he was reporting directly to Major General Ulysses S. Grant, who commanded the District of Western Tennessee and the Army of the Tennessee, from whom he received direction in the Iuka-Corinth campaign in September and October 1862. Soon afterward, he was ordered to replace Don Carlos Buell, taking command of the Army of the Cumberland. In December 1862, he advanced against General Braxton Bragg, soon fought in the bloody and indecisive Battle of Stone River. In 1863 Rosecrans forced Bragg back to Chattanooga, but sustained a great defeat at the Battle of Chickamauga and was soon besieged in Chattanooga. Because of the defeat, Rosecrans was relieved of command of the Army of the Cumberland and would eventually be given command of the Department of Missouri until wars end.

He resigned in 1867 and became a minister to Mexico. He then became involved in many railroad and industrial enterprises in Mexico and California. He was a Congressional Representative from California from 1881 to 1885 and then served as Register of the Treasury until 1893. He died near Redondo, California on March 11, 1898. His remains were later re-interred at Arlington National Cemetery in 1908.