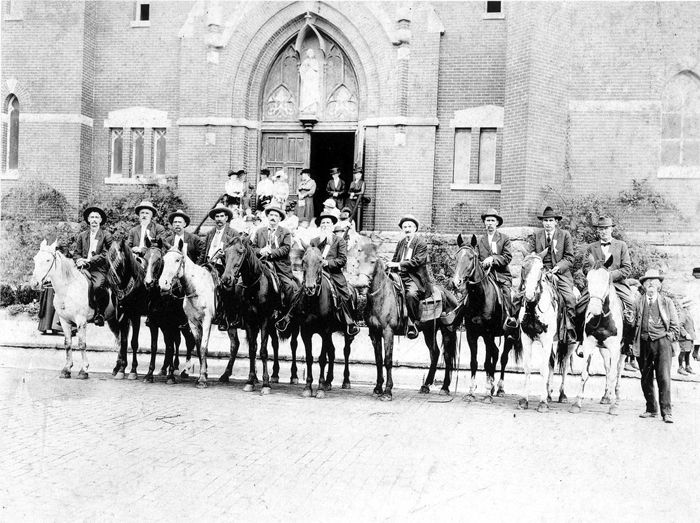 Invoking an image of weathered cowboys riding hard on the range, chasing outlaws in a running gunfight, are the U.S. Marshals of the Old West. And while those images were “real,” especially with many of the brave men working in Indian Territory under the jurisdiction of “Hanging Judge” Isaac Parker, or in the fledgling western territories of Arizona, New Mexico, Montana, Wyoming, and others; many may not know that the U.S. Marshal Service is more than 200 years old.

The U.S. Marshal Service was created by the first Congress in the Judiciary Act of 1789, the same legislation that established the federal judicial system. When George Washington set up his first administration and the first Congress began passing laws, both quickly discovered an inconvenient gap. No agency was established to represent the federal government’s interests at the local level. Part of the problem was solved by creating specialized agencies, such as customs and revenue collectors, to levy the tariffs and taxes, but numerous other jobs needed to be done.

Many of these tasks fell to the U.S. Marshal Service. Given extensive authority to support federal courts, Congress, or the president, these marshals and their deputies have served subpoenas, warrants made arrests, and handled prisoners for more than two centuries. 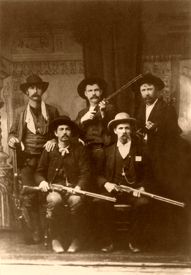 And though these are the most well-known of their tasks, they had numerous others, including the disbursement of money. The Marshals paid the fees and expenses of the court clerks, U.S. Attorneys, jurors, and witnesses. They rented the courtrooms and jail space and hired the bailiffs, criers, and janitors. They ensured the prisoners were present, the jurors were available, and the witnesses were on time.

But this was only a part of what the Marshals did. The Marshals have also taken responsibility for several other tasks over the years, such as taking the national census through 1870, distributing Presidential proclamations, registering enemy aliens in times of war, capturing fugitive slaves, and protecting the American borders.

Their motto is “Justice, Integrity, and Service.” Through the years, their heroics in the face of lawlessness have often become famous, especially in the days of the Old West, which has so often been portrayed in popular films and invoking the many images we have of these courageous men today.

In the second half of the 19th century, the U.S. Marshals became synonymous with the “Wild West” as they made their mark on history in the many lawless frontier towns. In many of these places, the marshals were the only kind of law available. Knowing this, numerous outlaws made their livelihoods in these fledgling towns that had not yet become structured enough to provide for their authorities.  Here, in “wicked” places like Deadwood, South Dakota; Tombstone, Arizona; and the plains of Indian Territory, U.S. Deputy Marshals became famous as they pursued such notorious outlaws as Billy the Kid in New Mexico; Dalton Gang, Belle Starr, and the Rufus Buck Gang in Indian Territory; Jesse James in the Midwest; and Butch Cassidy’s Wild Bunch in Wyoming; and hundreds of others.

Though popular western films generally showed these fearless men as forming a posse, pinning on their silver star-shaped badges, and pursuing the outlaws in a running gunfight, that the marshals always won, this was, in truth, not the norm. In fact, in Indian Territory (which later became Oklahoma), 103 deputies were killed between 1872 and 1896, roughly a quarter of the number slain throughout the marshals’ history. The territory, controlled by Judge Isaac Parker in Fort Smith, Arkansas, was described by a Fort Smith newspaper as the “rendezvous of the vile and wicked from everywhere.” Some of the courageous men who made names for themselves here were Heck Thomas, Bass Reeves, Bill Tilghman, Chris Madsen, and dozens of others.

In other areas of the west, more men who made names for themselves included Seth Bullock in South Dakota; Bat Masterson in Kansas; Joseph Meek in Oregon; William Wheeler in Montana; and again, dozens of others. Two of the most recognizable men who served as U.S. Deputy Marshals were Wyatt Earp and Wild Bill Hickok. However, they gained their notoriety primarily through their exaggerations and film depictions rather than the courageous acts shown by many more deputy marshals.

Once the Wild West was tamed, the U.S. Marshal service began to suffer in the 20th century as their star faded and the FBI flourished. Though they protected the home front during World War I and were heavily involved in enforcing Prohibition laws, they had essentially lost their “specialty,” By the 1950s found themselves acting as bailiffs for the federal courts and requesting background checks. In the 1960s, their importance rose as they enforced court-ordered racial desegregation and the Federal Witness Security Program established in the 1970s.

Today, the Marshal Service still has the responsibility to enforce federal laws and orders issued by the court, as well as prevention of civil disturbances, continued protection of federal witnesses, terrorist events, hostage situations, and numerous other duties directed by the Department of Justice, such as assisting in airport security after the terrible attack in New York on September 11, 2001. Current Deputy Marshals must carry firearms and become proficient in the latest electronic communications equipment and security devices. Their work continues to hold the constant threat of violence involving personal risk to the many men and women who pledge to protect the justice system.

Over the years, some 400 marshals have been killed in the line of duty. Their famous five-sided star is our country’s oldest emblem of federal law enforcement. 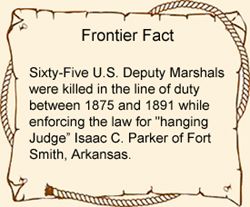 To celebrate their courage and bravery and provide information on the service’s rich history, fundraising efforts are currently underway for the U.S. Marshals Service National Museum, established in Fort Smith, Arkansas.