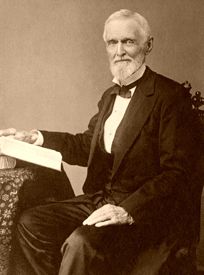 Jefferson Davis became the first and only President of the Confederate States of America during the American Civil War, though, for most people, little else is known about him. This is a brief history of the man who struggled to keep his fledgling nation afloat.

Jefferson Finis Davis was born into a military family on June 3, 1808. His father and uncles fought in the Continental Army in the American Revolution. Three of his older brothers (Jefferson was the youngest of ten children) fought in the War of 1812. Jefferson went to college and was commissioned as a second lieutenant in the 1st Infantry Regiment after graduating from West Point.

At 36 years old, Jefferson Davis was elected to the United States House of Representatives. However, two years later, the Mexican-American War broke out, and Davis resigned his House seat to form the Mississippi Rifles Volunteer Regiment. Jefferson fought bravely at the Battle of Buena Vista but refused promotion to brigadier general (he was a colonel) because it was unconstitutional for militia officers to be promoted to Federal military positions.

Jefferson Davis became a Mississippi Senator and was made the chairman of the Committee on Military Affairs. He had various political appointments afterward, but the talk of secession and war was drawing near.

While Jefferson Davis wanted the Union to be preserved between the North and the South, he believed the right for a state to secede from the Union must be preserved and fought for, if necessary. Davis resigned and delivered a farewell address to the United States Senate when Mississippi adopted an ordinance of secession in January 1861.

Days later, Jefferson became a Major General of Mississippian troops. Before February was over, he was named provisional president of the Confederate States of America. Jefferson continued to urge his fellow southerners to remain at peace with the United States. He appointed a Peace Commission to offer to pay off their part of the national debt and to pay for Federal forts and government properties that remained on southern land. Though peace talks would not work out, and only a month later, he approved the firing on Fort Sumter. The American Civil War had begun.

Virginia decided to join the Confederacy, and Jefferson Davis moved his family to the new capital, the White House of the Confederacy, in Richmond, Virginia. Jefferson was elected to a six-year term as President, and Robert E. Lee was Davis’ newly appointed General of the Army of Northern Virginia. The beginning of the American Civil War was going well for the Confederates, but Jefferson knew the economic advantage always belonged to the North. After a series of stunning victories, Robert E. Lee was defeated at Gettysburg, and Davis refused General Lee’s resignation offer. 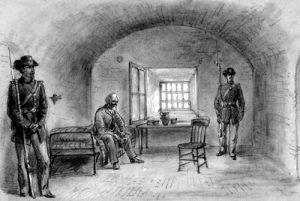 As the nature of the war changed, and the southerners were being defeated through attrition, Ulysses S. Grant pushed closer to Richmond. On April 3, 1865, Jefferson Davis and his Cabinet fled to Danville, Virginia, and then to North Carolina to flee northern capture. On April 9, 1865, General Ulysses S. Grant accepted the surrender of General Robert E. Lee. The Confederate government officially dissolved in May, and Jefferson Davis was captured in Irwinville, Georgia, and was held as a prisoner for two years in Virginia.

Davis was indicted for treason, but the indictments were dismissed, and the case never went to trial. After two years, he was released on bail by prominent northern and southern citizens and traveled overseas. Davis became president of a life insurance company and was elected to Senate again, though he was not allowed to serve because of the 14th amendment. Jefferson Davis continued to travel and author books, and in 1889, 24 years after the American Civil War ended, he died at the age of 81. His funeral was one of the largest ever in the South.

If the Confederacy fails, there should be written on its tombstone: Died of a Theory. 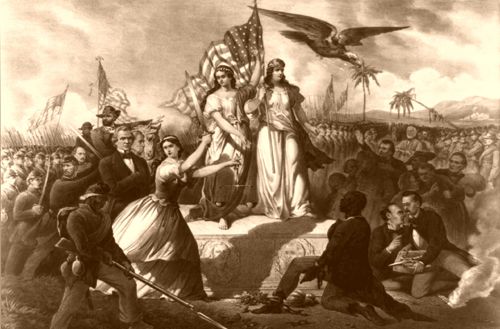 The end of the rebellion in the United States, 1865, C. Kimmel

Artist C. Kimmel symbolically depicts the downfall of the Confederacy. Columbia, crowned with stars, and Liberty, holding an American flag, stand on a center pedestal. On the pedestal are carved the likenesses of George Washington and Abraham Lincoln. In front of the pedestal, Justice, armed with a sword and scales, leads a charge of Union troops toward the right. Immediately behind Justice stands President Andrew Johnson, and Union Generals Butler, Grant, and Sherman are visible behind him. A black soldier stands in the foreground, and a freed slave kneels before Liberty’s pedestal. An eagle bearing thunderbolts flies overhead toward the right, where the defeated Confederates are gathered. Jefferson Davis (holding a sack of money), Robert E. Lee. (offering his sword in surrender), and John Wilkes Booth (with a pistol and knife) are prominent among them.