Salem Poor was an African-American slave who purchased his freedom, became a soldier, and rose to fame as a war hero during the Battle of Bunker Hill during the American Revolution.

Salem Poor was born into slavery in 1747 on a farm in Andover, Massachusetts, owned by John Poor and his son John Poor Jr. Many New England families treated their slaves as live-in servants and near family members, which may have been the case in the Poor family. Salem Poor purchased his freedom on July 10, 1769, from John Poor Jr. for 27 pounds, a year’s salary for an average working man.

In August 1771, Poor married Nancy Parker, a maidservant to Captain James Parker, who was half Native American and half African American. The couple continued to live in Andover and had a son named Jonas, born in about 1775.

In May 1775, Poor enlisted in the militia, serving under Captain Benjamin Ames in Colonel James Frye’s regiment, opposing the British troops occupying besieged Boston. On June 16, 1775, Frye’s regiment and two others were ordered to march from Cambridge to Charlestown (Boston). There were about 350 men in Frye’s regiment, and with several hundred men from the other two regiments, the group totaled about 850. Poor, along with other soldiers, began to build a redoubt, or fort, on the top of Breed’s Hill, adjacent to Bunker’s Hill. The next day, the Battle of Bunker Hill was fought on June 17, 1775, and included more than 100 African American and Native American soldiers fighting for the nation’s liberty. 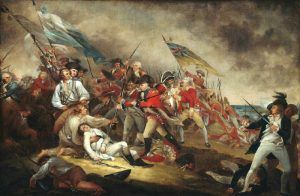 Battle of Bunker Hill during the American Revolution by John Trumbull

Salem Poor is best remembered for his actions during the Battle of Bunker Hill, where he is credited with killing British Lieutenant Colonel James Abercrombie and several British soldiers. Later that year, Poor’s valor and gallantry at the Battle of Bunker Hill prompted 14 officers, including Colonel William Prescott, to cite him for heroism and petition the General Court of Massachusetts with the following statement:

“To the Honorable General Court of the Massachusetts Bay: The subscribers beg leave to report to your Honorable House (which we do in justice to the character of so brave a man), that, under our own observation, we declare that a negro man, called Salem Poor, of Col. Frye’s regiment, Capt. Ames’ company, in the late battle at Charlestown, behaved like an experienced officer, as well as an excellent soldier. To set forth particulars of his conduct would be tedious. We would beg leave to say, in the person of this said negro, centers a brave and gallant soldier. The reward due to so great and distinguished a character, we submit to the Congress.”

No other soldier of the American Revolution received such recognition. 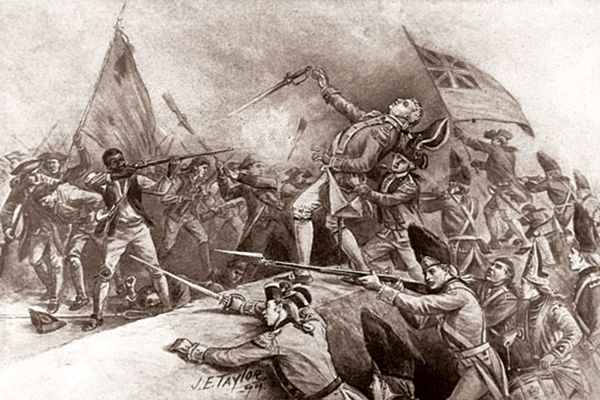 Black soldier in the American Revolution

In the meantime, General George Washington ended the recruitment of African Americans, and on November 12, 1775, he issued orders prohibiting all black men from serving in the Continental Army. In response, the Governor of Virginia — Lord Dunmore, offered freedom to all slaves willing to serve with the British. Washington immediately changed his position and ordered all recruiters to enlist any black men who wanted to fight.

Poor immediately re-enlisted in the militia and served at Fort George in upstate New York under General Benedict Arnold in 1776. Salem fought in the Battle of White Plains on October 28, 1776, and the Battles of Saratoga in September and October 1777 before retreating with the other patriots to the winter camp at Valley Forge in 1677-78. Later, he fought in the Battle of Monmouth on June 28, 1778, and continued to fight with the Patriot forces until March 20, 1780, when he was discharged.

That year, he married his second wife, Mary Twing, a free African American. The couple briefly moved to Providence, Rhode Island. By 1785, the marriage was over, and Salem married a white woman named Sarah Stevens in 1787.

In 1793 he was known to have spent several weeks in the Boston Almshouse and was briefly jailed for “breach of peace” in 1799. He married for the fourth and final time in 1801 and died in poverty in Boston in 1802. He was buried on February 5th, but the location of his grave remains unknown.

In 1975, the 200th anniversary of the Battle of Bunker Hill, the United States Postal Service issued a commemorative stamp for Salem Poor in honor of his heroism during the battle. 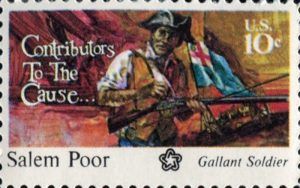