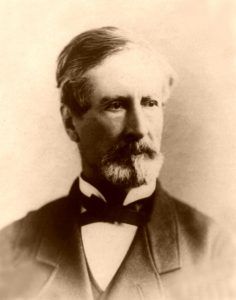 John Clifford Pemberton was a career U.S. Army officer and veteran of the Mexican-American, Seminole, and Mormon Wars.

Pemberton was born in Pennsylvania on August 10, 1814. He graduated from West Point in 1837. Though raised in the north, he and two brothers, who were also in the military, joined with the South during the Civil War. His decision to join the Confederates was most likely due to the influence of his Virginia-born wife and many years of service in the southern states before the conflict. He entered into Confederate service a brigadier general in 1861, commanding the Department of South Carolina, Georgia, and Florida. In October 1862, he was promoted to lieutenant general and assigned to oversee the Department of Mississippi, Tennessee, and East Louisiana.

Hampered by conflicting orders from the very outset of the Vicksburg Campaign, and after a stubborn defense of the city, Pemberton was compelled to surrender his army on July 4, 1863 to Union Major General Ulysses S. Grant. Following this defeat, he voluntarily resigned his commission and served as a lieutenant colonel of artillery in the defenses of Richmond, Virginia for the remainder of the war.

After the war, he lived a quiet life on his farm in Warrenton before moving the Phildelphia in 1876, where he died five years later on July 13, 1881. He was buried in the Laurel Hill Cemetery in Philadelphia, Pennsylvania.