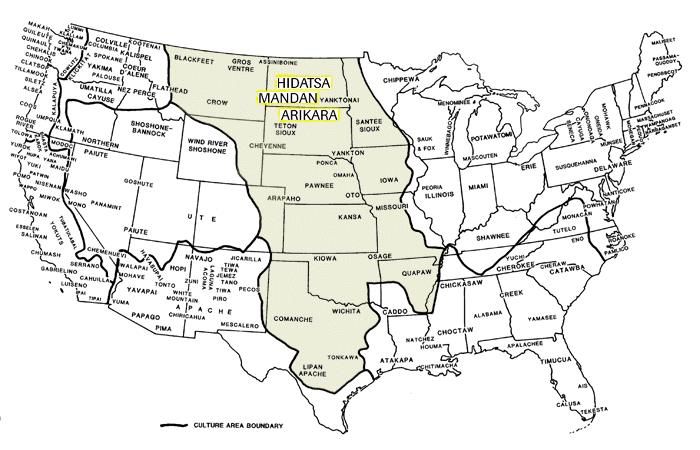 “While the vast herds of buffalo, deer, elk, and antelope remained, they were sure of food and raiment. They were, however, soon to be deprived of their abundant riches. The wave of civilization was moving over the western horizon. Its onward march was irresistible. No human hand could stay that rolling tide of progress. The pale faces moved over every divide; they cordelled or pushed their boats up every river. They entered every valley and swarmed over every plain. They traveled in wagons and prairie-schooners, on foot or horseback. Herding their little bands and flocks of domestic stock, they built their homes on every spot of ground that could be made productive. One great cause of disaffection among the Indians was the destruction of their vast herds of buffalo, which seemed like ruthless sacrifice.” — Nelson Miles, Personal Recollections and Observations, 1896

The term “Plains Indians” refers to the many Native American tribes that lived on the plains and rolling hills of middle North America in the region between the Mississippi River and the Rocky Mountains and from Canada to Mexico. 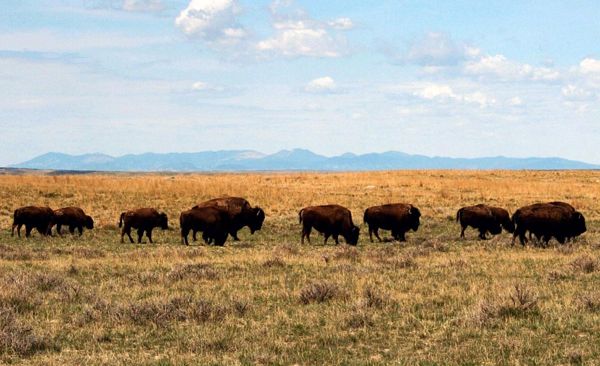 The nomadic tribes survived on hunting all types of game, such as elk and antelope, but, the buffalo was their main source of food. Every part of the buffalo was used. In addition to providing food, the Indians used the skins for tipis and clothing, hides for robes, shields, and ropes; they used dried buffalo dung for fuel, made tools, such as horn spoons, scrapers from bone; sinew or muscle was used to make bowstrings, moccasins, and bags; and the hoofs were used to make glue. Following the seasonal migration of the buffalo, the tipis that the Plains Indians lived in were ideal for their nomadic lifestyle, as they were easily put up and disassembled.

Before horses were introduced, hunting was far more difficult. Sometimes the hunters would surround the buffalo and try to herd them off cliffs or into places where they could be more easily killed. Another method was to drive them into a corral or into a v-shaped funnel made of fallen trees and rocks, where they could be killed. Sometimes the animals could be lured by a hunter covering himself with a buffalo skin and imitating the call of the animals. At this time, the Plains Indians hunted with spears, bows and arrows, and various forms of clubs.

The first European to encounter the Plains Indians was Spanish explorer Francisco Vasquez de Coronado in 1541. While looking for the wealth of Quivira, the expedition came across the Querecho tribe, later called the Apache, in the Texas panhandle. According to the Spaniards, the Querechos lived “in tents made of the tanned skins of the cows (buffaloes) and traveled near the cows killing them for food. They travel like the Arabs, with their tents and troops of dogs loaded with poles.” At this time, the Plains Indians traveled on foot, not yet having obtained horses. 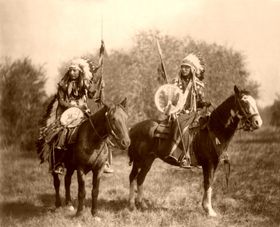 Sioux Indians on horseback, by Heyn, 1899

The real beginning of the horse culture of the Plains Indians began after the Pueblo Revolt in 1680 when the Pueblo tribes expelled the Spanish from New Mexico and captured thousands of horses and other livestock. The distribution of horses proceeded slowly northward to the Great Plains, as tribes caught and trained wild horses, stole them from white settlers and enemy tribes, and began to breed their own horses.

By the early 18th century, some tribes had fully adopted a horse culture. The Comanche were among the first to adopt a mounted nomadic lifestyle, and before long, all the Plains tribes integrated them into their daily lives. Horses enabled the Indians to travel faster and further in search of buffalo and to transport more goods, making their lives much easier. Horses became an item of prestige as well of utility, and the Indians became very fond of them.

Along with horses, guns were also introduced by the Spaniards, which also simplified the lives of the Plains Indians, though they continued to use bows and arrows, because guns took too long to reload and were heavy.

The Sioux became the dominant Plains Indians tribe in the mid 19th century. They had relatively small horse herds, which had less impact on their ecosystem, occupied the heart of prime buffalo range, as well as an excellent region for furs which they sold to traders for goods, including guns.

Religion varied between the various tribes of the Plains Indians, but, they shared several common beliefs, including the belief that all things possessed spirits and believing in one main god – the Great Spirit, or in the Sioux language – Wakan Tanka. 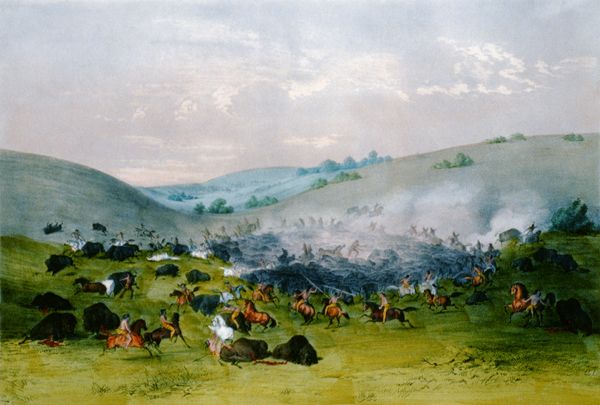 The Indians believed that this Great Spirit had power over all things in nature including people, animals, vegetation, climate, and the land. The earth was believed to be the mother of all spirits and the sun also had great power because it gave the earth light and warmth. The spirits were worshiped daily individually or in groups. They also believed visions in dreams came from the spirits. The Plains Indians had several important ceremonies and rituals, including the Sun Dance, which could last for days, and Vision Quests, where young boys would seek their spirit totem that would protect him for the rest of his life.

Most tribes had a Medicine man or woman that were “blessed,” or “Wakan,” in the Sioux language, who was responsible for helping to interpret visions, utilize rituals and remedies for healing, take the lead in certain ceremonies, and were considered so important, they were the ones who decided the time was right to hunt. Most individuals carried their own medicine bundle, which would hold skins, pipes, dried herbs, and tobacco, which they believed had special powers.

In 1800 there were around 60 million buffalo in North America; however, that would drastically change over the next century, changing the lives of the Plains Indians. This is due in part to individual hunters looking to make a profit on the buffalo hides, government to starve the population of the Plains Indians by killing off their main food source, and the coming of the railroads. The buffalo, like the Indian, was in the pathway of civilization.

In the second half of the 19th century, buffalo hunters, armed with powerful, long-range rifles, began killing the buffalo in large numbers. In some cases, an individual hunter could kill as many as 250 buffalo a day.

By the 1880s over 5,000 hunters and skinners were involved in the trade, leaving the plains littered with carcasses. In the meantime, the government promoted hunting the buffalo for several reasons – so that ranchers could utilize the plains land to range their cattle without competition, to weaken the Plains Indian population and pressure them to remain on reservations, and support the railroad industry, who complained that the buffalo herds damaged tracks and delayed trains.

The killing of buffalo reduced the number of resources available to independent Native Americans and for most, the federal government’s reservation system became the only means for survival. By 1890, bison were closed to extinction with only about 750 of them left on the plains.

The Plains Indians, by that time, were mostly confined to reservations, and many, to this day, remain dependent upon the Federal Government for sustenance. 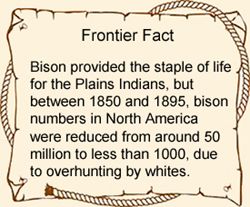 “The buffalo supplies the Indians with the necessities of life; with habitations, food, clothing, beds and fuel, strings for their bows, glue, thread, cordage, trail ropes for their horses, covering for their saddles, vessels to hold water, boats to cross streams, and the means of purchasing all they want from the traders. When the buffalo are extinct, they too must dwindle away.” — Francis Parkman, 1849