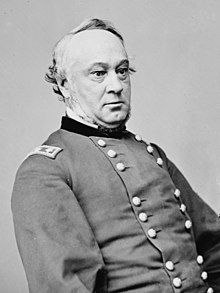 Henry W. Halleck, a loyal defender of the Union, Henry Halleck served first as a senior commander in the Western Theater before becoming the General-in-Chief of the Union armies in July 1862. Known as “Old Brains” for his scholarly pursuits, Henry Wager Halleck was an accomplished Union general, lawyer, and land speculator.

Born in Oneida County, New York, on January 16, 1815, Halleck was raised on a farm in upstate New York before running away to join his uncle in Utica, where he attended Hudson Academy. He then furthered his education at the United States Military Academy, ranking third in his class of 31 upon graduating in 1839. During the Mexican-American War, Halleck spent several months in the West, building fortifications in California and serving as lieutenant governor of the captured port of Mazatlan in Mexico. Before the Civil War, he also lectured at the Lowell Institute, wrote Elements of Military Art and Science, and built San Francisco, California’s first fireproof building.

Despite having sympathies for the Confederacy, he was staunchly in favor of preserving the Union. He became a U.S. Army major general in August 1861 after a recommendation from Union general Winfield Scott. The fourth highest-ranking general in the Union army, Halleck was given command of the Department of the Missouri, where he oversaw early Union operations, including the successes at Forts Henry and Donelson and the costly victory at Shiloh, Tennessee.

He was considered an excellent general, with Major General William T. Sherman once calling him the “directing genius” of several Union subordinates, considered difficult to work with and provided little control when it came to field operations. As such, President Abraham Lincoln once described him as “little more than a first-rate clerk.” Following the Peninsula Campaign, Halleck was moved East and named General-in-Chief of all Union armies. In 1864, when Ulysses S. Grant became General-in-Chief, Halleck was reassigned as chief of staff, where he was much more effective as an administrator. He served as a pallbearer for Abraham Lincoln following the president’s assassination in April 1865. 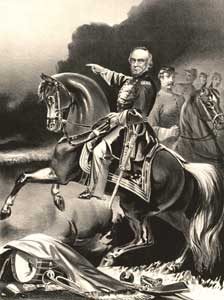 After the war, he visited the newly purchased Alaska territory with photographer Eadweard Muybridge. He is credited as one of the people to give the state (then called Russian America) its name. Halleck spent his last years assigned to the Military Division of the South. He died at his post on January 9, 1872, in Louisville, Kentucky. His remains were returned to his native New York, where he was buried at the Green-Wood Cemetery in Brooklyn.