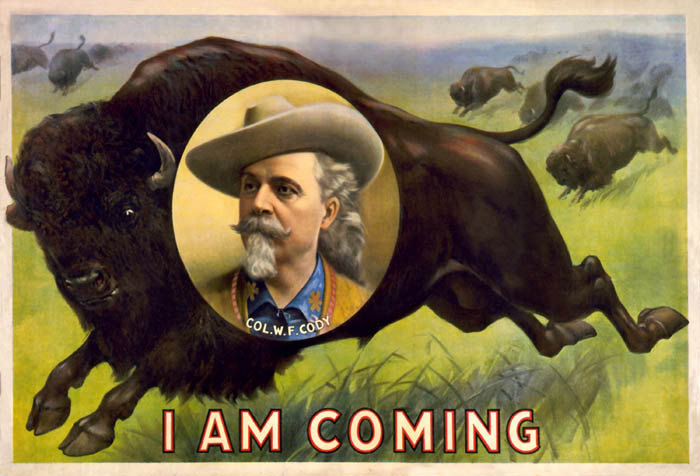 William Frederick Cody, “Buffalo Bill,” was born in Le Claire, Iowa, on February 26, 1846. While he was still a child, his family moved to Leavenworth, Kansas. Cody left his home in Leavenworth at the young age of 12, working for a wagon train going to Fort Laramie, Wyoming. Herding cattle and driving a wagon, he crossed Great Plains several times. 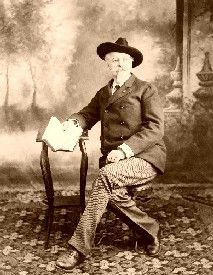 In 1859 Bill rushed to the goldfields of Colorado along with thousands of other prospectors. He met with little success searching for gold for two months near Black Hawk, Colorado.

On his return to Kansas, he stopped in Julesburg, Colorado, where he was recruited to ride in the Pony Express in 1860. Most of his time with the Pony Express was spent in Kansas, although he occasionally traveled across northeast Colorado.

Shortly after the death of his mother in 1863, Cody enlisted in the 7th Kansas Cavalry regiment and fought with them for the rest of the Civil War.

After the war, on March 6, 1866, Bill married Louisa Frederici in St. Louis, Missouri, and their first child,  Arta Lucille, was born the same year. Three more children would follow – Kit Carson, named after the famous frontiersman in 1870; Orra Maude in 1872; and Irma Louise in 1883. 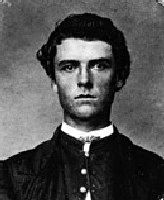 In 1867, Cody began hunting buffalo for the Kansas Pacific Railroad and soon earned the nickname “Buffalo Bill.” In less than 18 months, he killed nearly 5,000 buffalo, consumed by the 1,200 men employed in track-laying.

In 1868, Cody was again employed by the U.S. Army as a civilian scout and guide for the Fifth Cavalry. His experience and skills as a plainsman made him an invaluable tracker and fighter.

In 1872, Cody became one of only four civilian scouts awarded the Congressional Medal of Honor during the Indian Wars for bravery in action. General Philip Sheridan saw in Cody a combination of charisma and frontier know-how. At this time, the Army needed some good publicity, and Sheridan soon arranged for Buffalo Bill to lead lavish hunting expeditions for visiting dignitaries. When the Grand Duke Alexis of Russia came to visit in 1872, Buffalo Bill guided the wagon train, accompanied by General Sheridan and Brevet Major General George Armstrong Custer. Buffalo Bill also convinced a famous Sioux Indian named Spotted Tail and his village to join the hunt. When Buffalo Bill explained to Spotted Tail about the trip, the Indian said, “Great white man wants a big hunt with the Indians.” These excursions became full-scale media events, glamorizing the military and Buffalo Bill. 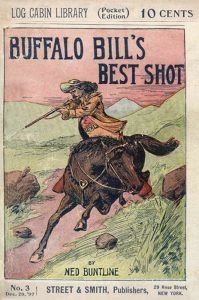 During this time, authors avidly romanticized the exploits of the heroes and villains who roamed the plains, and Buffalo Bill Cody was no exception. Ned Buntline, who wrote several western stories that became known as “dime novels,” further exaggerated and created the hero of Buffalo Bill. Hungry for news of the West, easterners quickly bought these many books by Buntline and others. In 1872, when Cody was just 26 years old, Buntline persuaded him to take the stage portraying himself, eventually leading to Buffalo Bill’s Wild West Show.

Over the years, the troupe included James Butler “Wild Bill” Hickok, Texas Jack Omohundro, Annie Oakley, and several Native Americans, including Sitting Bull, “real” cowboys recruited from the West, buffalo, as well as other live animals. In one form or another, the Wild West Show would run for 30 years, charming crowds throughout the United States and Europe.

During the height of the Plains Indians‘ resistance to white settlement, Cody returned to the prairies to scout for the Fifth Army in the summer. On July 17, 1876, three weeks after George Custer and the Seventh Cavalry were defeated at Little Big Horn, Cody’s regiment intercepted a band of Cheyenne warriors. In his stage clothing, Buffalo Bill killed and scalped a Cheyenne warrior named Yellow Hair; he reportedly cried out, “First scalp for Custer!”

Despite his character as a past figure, Buffalo Bill always looked to the future. As a businessman, he invested his earnings in an Arizona mine, ranching, coal and oil development, filmmaking, and publishing, and founded Cody, Wyoming, in 1896. He built hotels in both Sheridan and Cody, Wyoming.

He also advocated for his former foes, the Native Americans, pushing for better treatment. Despite his history of killing the buffalo, he spoke out to conserve this American icon. In 1885 he stated, “The defeat of Custer was not a massacre. Skilled fighters with orders to kill were pursuing the Indians. For centuries they had been hounded from the Atlantic to the Pacific and back again. They had their wives and little ones to protect, and they were fighting for their existence.”

On another occasion, he said, “Every Indian outbreak that I have ever known has resulted from broken promises and broken treaties by the government.”

By the turn of the 20th century, William F. Cody was probably the most famous American in the world. No one symbolized the West for Americans and Europeans better than Buffalo Bill. He was consulted on Western matters by every American president, from Ulysses S. Grant to Woodrow Wilson.

However, at the same time, another show was providing serious competition – Pawnee Bill’s Wild West and Great Far East Show, operated by Gordon “Pawnee Bill” Lillie, who had, years earlier, worked for Buffalo Bill. When Cody’s show began to suffer financially, he sold a one-third interest in his production to Pawnee Bill in 1908. Soon, Gordon bought the remaining interest in the show but retained Buffalo Bill as a partner. The two traveled together as the “Two Bill’s Show” until 1913, when the venture went bankrupt. It was billed as one of the entertainment triumphs of the ages and traveled worldwide, entertaining audiences with realistic and fantasy views of the Old West. The show closed in Denver, Colorado, in 1913 after touring for five seasons. 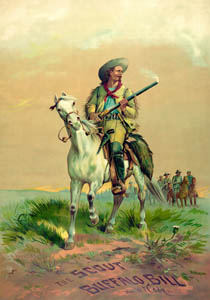 Buffalo Bill Cody never retired. On January 10, 1917, he died while visiting his sister’s home in Denver. By his request, he was buried on Lookout Mountain, west of Denver, Colorado, overlooking the Great Plains. His wife Louisa was buried next to her husband four years later.