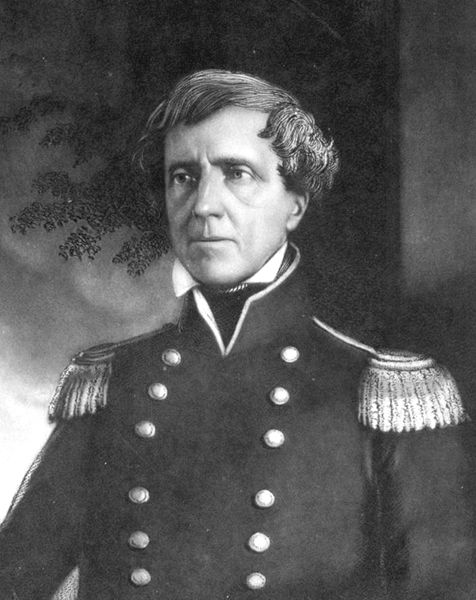 General Stephen Kearny, one of the foremost frontier officers of the U.S. Army, is remembered for his significant contributions to the Mexican-American War, especially California’s conquest.

Stephen Watts Kearny was born on August 30, 1794, in Newark, New Jersey. Following two years of college, Kearny joined the New York Militia and began a military career that would last for 36 years. He spent most of that time traveling throughout the western frontier, exploring, mapping, visiting Indian tribes, and keeping the peace.

He fought in the War of 1812, serving as a First Lieutenant. Afterward, he was assigned to the western frontier and, in 1819, was a member of the expedition to explore the Yellowstone River in present-day Montana and Wyoming. During his travels, he kept extensive journals, including his interactions with Native Americans.

In 1826, Kearny was appointed as the first commander of the new Jefferson Barracks in St. Louis, Missouri. During this time, Kearny met, courted, and married Mary Radford, the stepdaughter of William Clark of the famous Corps of Discovery Expedition. The couple had eleven children, of whom six died in childhood.

In 1833, Kearny became the Lieutenant Colonel of the newly organized 1st Dragoon Regiment, which eventually grew into the U.S. Cavalry, earning him the nickname of the “father of the United States Cavalry.” The regiment was stationed at Fort Leavenworth, Kansas. By the early 1840s, when emigrants began traveling along the Oregon Trail, Kearny often ordered his men to escort the travelers across the plains to avoid attack by Native Americans. A practice that would continue by the military for years to come during Westward Migration. 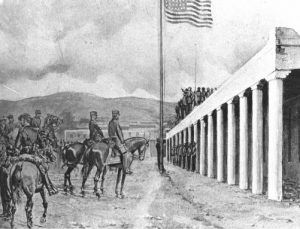 The capture of Santa Fe, New Mexico, during the Mexican-American War

At the outset of the Mexican-American War in 1846, Kearny was promoted to Brigadier General and took a force of about 2,500 men to Santa Fe, New Mexico. He used diplomacy rather than battle and marched unopposed into Santa Fe in August of 1846, where he established a civil government and promised a democratic administration of New Mexico Territory. He also became the Commander of the Army of the West, which consisted of some 1600 men.

Kearny would leave New Mexico and head for California in the later part of 1846, where he battled Mexican-Californians to retake the province, earning victories in San Gabriel and Mesa in early January 1847, ending resistance there.

Trouble brewed within the American ranks when Lieutenant Colonel John C. Fremont, acting civil governor, refused to recognize Kearny’s authority to organize a new territorial government. Washington D.C. confirmed Kearny’s authority when Fremont was arrested for mutiny, disobedience, and improper conduct. Kearny would establish the civil government before returning, with Fremont, to Fort Leavenworth in August of 1847 for trial. Fremont was found guilty. However, his sentence was commuted by President Polk, and he was reinstated.

By this time, Kearny was promoted to Brevet-Major General, ordered to Mexico, and appointed civil governor at Veracruz and later Mexico City. While in Veracruz, he contracted yellow fever forcing his return home to St. Louis, Missouri. Stephen Watts Kearny died there on October 31, 1848. He was buried in Bellefontaine Cemetery, a National Historic Landmark in St. Louis.