Documentation shows that 135 women soldiers fought in the Civil War, though estimates believe the figure to be closer to 400. Of these brave women fighting on both sides of the line was one named Sarah Rosetta Wakeman.

More commonly called Rosetta, she was born on January 16, 1843, in Afton, New York, to Harvey Anable and Emily Wakeman, the first of nine children in the family. Her father, who was a farmer, also served as a constable in the town. As the oldest child in a large family, she found herself working hard on the farm to help make ends meet and later helped out even more by working as a domestic.

At the age of 19, she left home to find work in Binghamton, New York. However, she quickly found that “women’s work,” such as earning a living as a laundress or housekeeper, paid very little, so she dressed as a man and soon accepted a job on a canal boat as a coal handler. On her first trip up the river, she met several soldiers from the 153rd regiment of the New York State Volunteers, who told her they were offering $13 a month in pay and a $152.00 signing bonus.  This large sum was irresistible to the young girl, and though she was just five feet tall, she soon applied and was accepted into the regiment as “Lyons” Wakeman on August 30, 1862. At the time she applied, she claimed to have been 21 years old, and her enlistment papers described her as five feet tall, fair-skinned, with blue eyes.

Once the 153rd Regiment filled its quota of volunteers, it joined the United States service on October 17, 1862, and left for Washington D.C. shortly thereafter, arriving on October 22nd.  Their first tour of duty was in Alexandria, Virginia, assigned to protect the perimeter of Washington City. In her letters home, Rosetta bragged, “I can drill as good as any man in my regiment.” 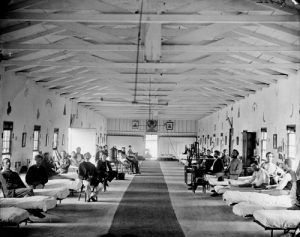 A little more than a month later, on April 9, 1864, she gained her first combat experience when the unit successfully repelled the Confederates. Near the end of the campaign, Rosetta and many of her fellow soldiers were stricken by chronic diarrhea. Often while in the field, drinking water was scarce, and the soldiers often drank from streams that were poisoned with the rotting flesh of dead animals. Diagnosed with dysentery, she was transferred to the regimental hospital at Alexandria, Louisiana, on May 3rd and, when the condition persisted, was transferred again to the Marine U.S.A. General Hospital in New Orleans on May 22nd. Her illness persisted, slowly draining the life from her until she died on June 19, 1864.

During her tenure as a soldier, her true identity was never discovered, not even when she visited male friends in other regiments who knew her from home or when she was hospitalized with dysentery. When she died, she was buried as a soldier. Her remains are interred at the Chalmette National Cemetery, with her headstone reading “Pvt. Lyons Wakeman.”

Many years later, Wakeman’s letters home were discovered by a relative in the farmhouse’s attic where she grew up. It wasn’t until then that the military ever knew she was a woman.