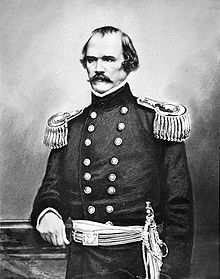 Albert Sidney Johnston was an experienced and well-respected commander of all Confederate army operations in the Western Theater. His army was attacked and nearly destroyed by Union forces led by General Ulysses S. Grant at Shiloh, Tennessee, on April 6, 1862. Johnston was wounded in the battle and did not survive his injuries. Though considered at the outset of the war, as one of the most promising commanders, North or South, Albert Sidney Johnston’s service was brief and his vast potential unrealized. The Kentucky-born Johnston was appointed to West Point from Louisiana and graduated eighth in the class of 1826. After eight years of service, he resigned to care for his terminally ill wife. A failure at farming, he went to Texas and joined the revolutionary forces as a private. Within a year, he had risen through the ranks as the force’s chief commander and senior brigadier general.

He served as Secretary of War in the Republic of Texas and commanded the 1st Texas Rifles in the Mexican War. Reentering the United States army in 1849 as a major and paymaster, he became a colonel in 1855. He was brevetted brigadier-general for his services in the 1857 campaign against the Mormons in Utah. He resigned his commission on April 10, 1861, but did not quit his post on the West Coast until his successor arrived. Relieved of his command, he began the long trek to Richmond overland. Meeting with Jefferson Davis, he entered Confederate service on August 30, 1861, as a full general and the second-ranking officer. He was given command of all Confederate troops west of the Allegheny Mountains, where he attempted to utilize isolated commands to hold points within the invaded Confederate states.   He established a line of defense in Kentucky from the Mississippi River to the Appalachians. He held it until it was broken at Mill Springs in January and at Forts Henry and Donelson in February 1862. Abandoning Kentucky and most of Tennessee, he fell back into northern Mississippi, where he concentrated his previously scattered forces. In early April 1862, he moved against Ulysses S. Grant’s army in Tennessee, surprising the Federals with an attack near Pittsburg Landing and driving them back in what would become the Battle of Shiloh. While directing front-line operations, he was wounded in the leg, likely by friendly fire. Not realizing the seriousness of his wound, he sent his personal physician to attend to some captured Union soldiers, and he bled to death on April 6, 1862. He was the highest-ranking officer of either side killed during the war. His remains were returned to Texas, where he was buried at the Texas State Cemetery in Austin.